Yesterday was a long day for Brutus & his big brother Mason.  They both had vet appointments in the morning, and both had blood draws.  I'm lucky to have dogs that behave well at the vet - they don't seem to mind it at all, actually (despite the fact that I'm always erring on the side of doing too may tests if their health is ever in doubt). 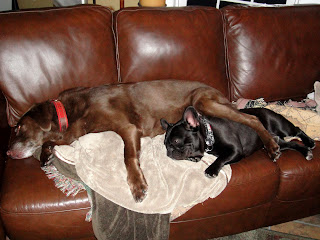 Mason came through with flying colors - as much as they can fly for an 11-year old lab :)  He is not overweight (to the amazement of every vet we've ever seen), and other than some hip arthritis & fatty skin tumors, is in strapping good health according to his bloodwork.
Being a Frenchie, it's a good thing Brutus likes his vet Dr. Lori - seeing as we are already frequent fliers in her office!  She's been trying to get to the bottom of some bladder issues he has had for the last 3-4 months.  Thankfully we are finally making progress getting that resolved, at least under control.
The newest fiasco is that Brutus ate something last night; we don't know exactly what, just saw the tail-end of some kind of fabric going into his mouth :(  So now, instead of watching him go #1, I'm anxiously awaiting some #2.  He is eating fine, actually seems to like the vegetable oil I'm adding to help "lubricate" the system.
Everyone keep your fingers crossed for The Brute.  If no poopage (as we so lovingly refer to this body function) by this afternoon (that would be 24 hours since the last action), it's back to the vet for emergency surgery to remove an obstruction.  Thanks to my dad & Barb for keeping an eye on things while I go to work today!
Posted by BRUTUS at 4:51 AM