I'm happy to report that we are all home safe!
Paul & I got in at 2AM this morning, a bit later than we'd planned.  Unfortunately we had to sit on the tarmac in the 113F heat for an extra hour and a half while they cleared a broken-down plane (eek!!) off the only runway that was long enough for us to take off from!  Other than that, the trip was smooth sailing, so I can't really complain (and the 1st class plane upgrade really helped too...).
First thing this morning I picked up the boys from the "spa".  Both of them reportedly did well and looked every bit of their normal selves, as well as very happy to see me.  Mason liked his "cuddle time" and Brutus was all about "game time".  They both enjoyed their Frostypaws and grilled cheese sandwich bedtime snacks.  I did my best to get a picture of Brutus dragging one of the staff out to me - this is the best I could do in the midst of all the enthusiasm (sorry about the lousy photo): 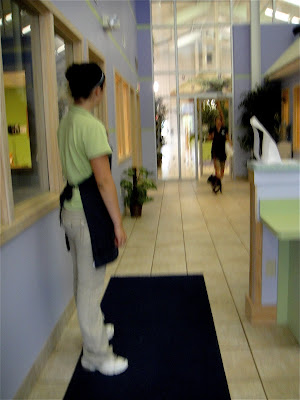 Can you even see Brutus?  He was moving so fast the camera couldn't compensate!  He caught sight of me through the glass & couldn't get to me fast enough :)
Once we got back home, both Brutus & Mason were down for the count.  Don't think they slept well while I was away, and were just so glad to be back in their normal comfortable surroundings.  I had to laugh when Brutus barked, or should I say tried to bark - he is hoarse!  Must have been quite the noisy little guy while I was away; he wore out his barker!!  Brutus & I had a nice cuddly nap, him snoring away on top of me.  My phone was the only thing in reach, so here's a slightly fuzzy picture of our siesta: 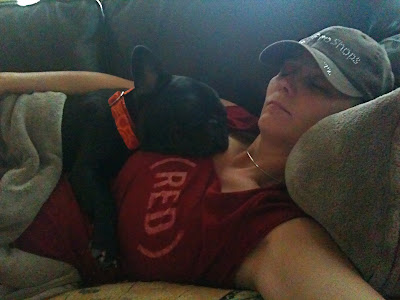 ZZZzzzzzzzz......
We brought home some souvenirs, including a black bear stuffie for the boys (like they need another one).  Brutus was more interested in a sequoia pine cone, must have smelled really interesting. 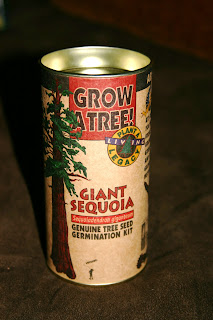 Going to give my not-so-green thumb a workout & try to grow my very own sequoia from the kit (ha ha). 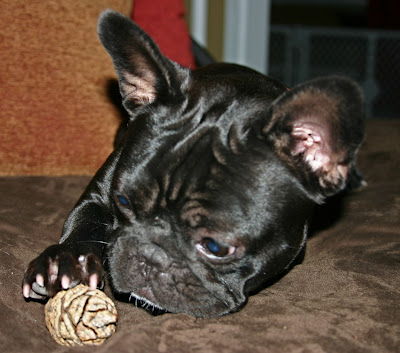 Brutus was very intrigued by the sequoia pinecone. Guess what happens next... 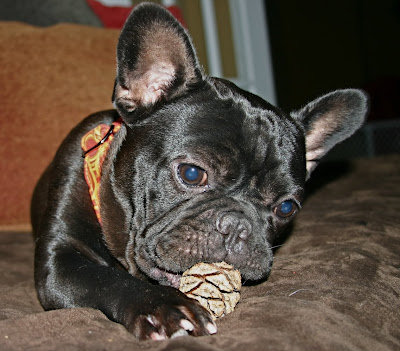 Yep, he tried to eat it!
Supposedly only an little squirrel called a chickaree can open these, unless they are opened by fire.  Guess the pinecones never met a Brutus before... 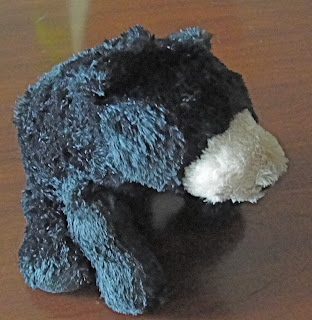 Here's a photo of the new stuffie, "Sherman".  We'll see how long this little guy lasts... 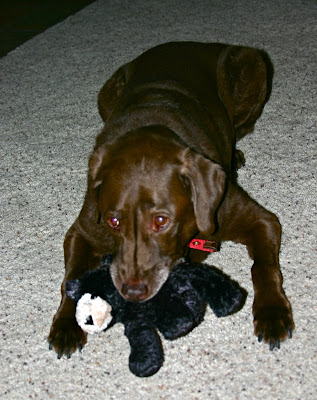 Mason with his new buddy Sherman.  After the picture he headed off to enjoy him in the privacy of my closet (away from Brutus).
Hope you all enjoyed Flat Brutus and his travel adventures.  It'll be a while before I need his services again, so he's tucked away for safe keeping for now.  We are all glad to be home and back in our normal routine.  Need to catch up on everyone else's blogs, did the best I could form the road!  I know I've been tagged/given awards by of few of our furiends, so know that I appreciate you all thinking of me & will oblige with the appropriate posts as soon as I can!
Speaking of that, we've got some good posts lined up for the rest of this week, including some long-awaited ones!  We found a few presents waiting in our mailbox (our prize from Sugar's contest finally came - yippee!!), and I also got a CD with some agility action shots of Brutus.
Stay tuned for all that & more :)
Posted by BRUTUS at 6:06 PM

The picture of Brutus on his mama napping is pressssshus...

We are big fans of Frosty Paws too!

Welcome home! I like staying at the spa but I always do that tug thing when momma comes to get me so she to make her feel bad about leaving me.

Nice pressies from the big adventure.

We're glad you are all home safe and sound. Mom swears we never get anything to eat or drink at the spa.

The last time we went to the spa, we couldn't get to mom and dad fast enough when we saw them when they came to get us.

Love the picture of Brutus and you sleeping.

Glad you all are back at home!
Kisses and hugs
Lorenza

I loved the tug the spa worker to Mom shot!

So nice to see the family all togethew again.
I'm suwe Bwutus and Mason had a good time at the Spa, but thewe's nothing as good as home!
I'm suwe Bwutus can open that pinecone in a second. Mason looks adowable wif his stuffie Shewman. I hope he was able to save him fwom Bwutus
smoochie kisses
ASTA

Those pictures of Brutus with the pine cone are soooo cute! What breed is Mason?

It can be difficult to keep up with all the blogs sometimes, but I try to keep Jackal's most active. Storm and Jasmine are mostly for when I'm bored or something interesting happens. What can I say? Sometimes I just need a creative outlet lol!

I would love to see a video of Brutus doing agility! I bet that is just the cutest thing. I wish we had some agility clubs in my area, but as far as I know there aren't any within like seventy miles.

I know what you mean about missing dressage. I just miss horses in general. The past two years has been the longest I've been without one in my life (from age 5 & later).

It's great you are all home again. I can't wait to hear what you thought of the spa. I have never been to one and am curious to know what it's like.

Sherman looks like a terrific stuffie! I bet he is nice and squishy.

That picture of you and your mom napping is adorable. You look dog tired!

Yay Brutus, your humans have returned! I just returned myself from a trip, my very first! I'm going now to read the older posts & see what kind of mischief your Flat Self got into :-)
Your pal,
Sedona

Brutus your home with your family!! Yahoo, and you got pressies. Cool. I bet you will sleep good tonight. I love all the pictures of you and Mason

We love the picture of Brutus napping with him mom! awwwwwwwwwwwww
We're sure you guys are all happy to be home together!

we look forward to all your upcoming posts