I just couldn't wait for Toon Tuesday to show this...

In honor of Brutus' first birthday, I commissioned a fun drawing of him.  I'm so excited how well it turned out, as the artist was able to capture so much of Brutus' personality & expression from just a few photos.  Her name is Lili Chin, and she does the drawings for a VERY reasonable fee, a portion of which she donates to a doggie rescue group of your choice (we chose French Bulldog Rescue Network, naturally!).  You get the image in a high-res digital format (sent via the internet), as well as a large print (suitable for framing) that she snail-mails to you.  You can see some of her work on her website (http://doggiedrawings.tumblr.com/) or email her (lili.chin@gmail.com) for more details.  She was fantastic to work with, getting this done very quickly & letting me revise the image a few times prior to the finished product to ensure that it was the perfect 2-D rendering of my Brutus.
So here is the cartoon version of Brutus, shown in the commonly seen "froggie" pose! 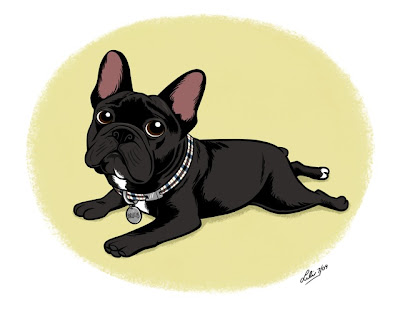 Uh, we don't see a link to her website. *hint-hint*

I swear I moved the cursor over all the text looking for a link earlier.

Oh well, I see it now. Thanks!

She did a great job ! You look so cute.....just like in real life. What a great idea your mom had. Have a fun day.
~Lexi~

That is so cute!! Brutus, its you. My Mom is smiling so big right now.

That is so YOU, Brutus! Pawsome job! I'm gonna drag my human over to the artist's website right now.
Your pal,
Sedona

that is too too precious

deb and the brats

Brutus, thank you for coming by and wiching my a Happy Birthday!! It looks like you had a great birthday too!!! Love the cartoon your mommy had done, it's really cute. Mommy wants a Frenchie too. She thinks you're just adorable!!!
Happy belated Birthday!!!!

WOW! That is so great, Mommy is sending that woman's link to EVERYONE. SHE. KNOWS!

Our Mom thinks this is absolutely precious - could make a great gift for her sometime.