As I mentioned briefly in a post earlier this week, we had quite a busy weekend. There was a big fundraiser for some local shelters, and Brutus & I had been invited to be part of an agility demonstration.  The event was held at a pool that is part of a large local park system - they empty the pool most of the way (done automatically as part of winterization), and open it up for a "dog paddle" for the afternoon.  The water level was really low, from just inches to maybe three feet in the deep end, so many dogs hopped in to play as soon as the pool opened. 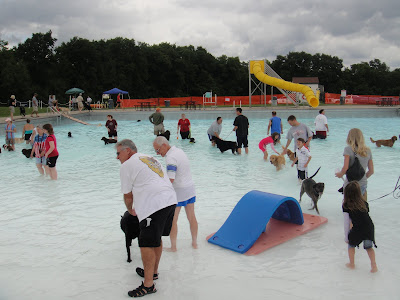 We have never seen SO many dogs off-leash, so I was initially a little hesitant to join the party (oddly enough, I never heard as much as a growl the whole afternoon).  Any of you that have been following our blog know how Brutus feels about swimming (water is evil), so I really never planned to take him in the pool.  But everyone else looked like they were having such a good time, I couldn't resist.  I rolled up my pant legs and waded in, Brutus following at my side. Predictably, as soon as his feet touched the water Brutus stopped dead. 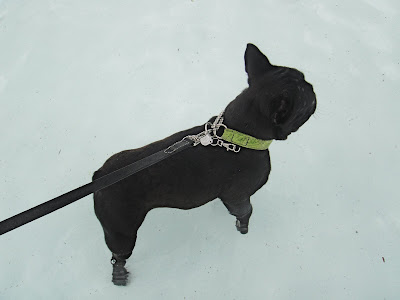 But then he started looking around at all the other dogs and saw how much fun they were having.  Brutus decided to wade in deeper to check out the action.  Before I even realized it, he was chin-deep!  I think he even enjoyed it, and finally realized how nice and cooling the water could be.  The Brute's new-found bravery was rewarded by a reunion with some friends we met last weekend - do you remember Calpurnia the English bulldog and her buddy Picasso the Frenchie from our Dog Fun Day post? 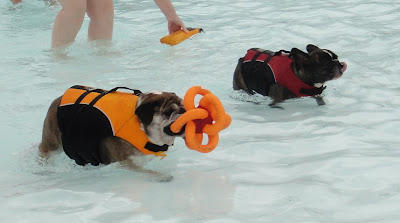 Well, there they were, playing in the pool right alongside us!  They came prepared, apparently avid swimmers - both had on some pretty cool life vests!  Not only did they wade, they both actually swam!!  Way to disprove the myth that bulldogs can't swim!! 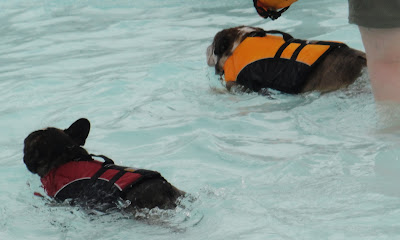 If they can do it, so can Brutus!  I ventured just a little deeper and he followed - as the bottom fell away a little more, he actually started to dog paddle!!  No way!  I was amazed and busy making sure he didn't start to sink or get water up his nose (since he wasn't wearing a vest like Picasso).  After a couple of moments I picked Brutus up out of the water - and he kept swimming in the air!!   It happened so fast that I didn't get any pictures, but here is one of Brutus comfortably standing, chin-deep. 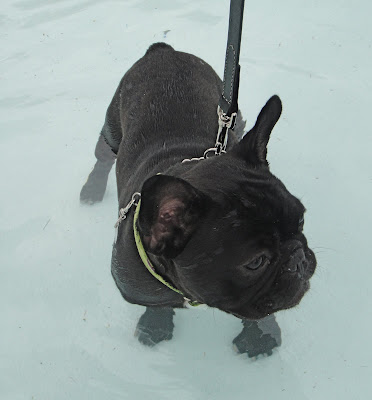 After the big breakthrough, we got out and toweled off.  Didn't want to use up too much energy, as we still had our agility demo to do.  We bumped into Picasso again poolside, relaxing after his dip.  Seems like he is quite the pampered Frenchie too, his mom even brought a terrycloth robe for him to lounge in! 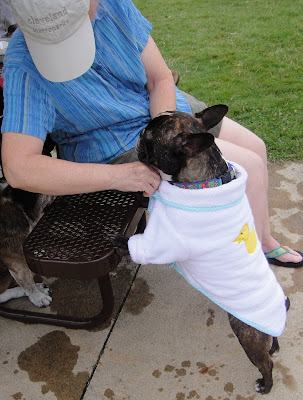 Think we might try swimming again - Brutus had one of his most energetic agility runs ever after his aquatic experience!  Whether it was because his core temperature was cooler than usual, or just that the crowd turned him on, Brutus absolutely flew through the simple course we had set up.  There was so much applause that we went back in for a second round, and Brutus was in his glory!  I'm not sure who had more fun, him or me!  What a great afternoon!!
Posted by BRUTUS at 12:46 AM

Oh No...I am losing another shore pal...Water is evil Brutus...Don't listen to Mommy!!!

Way to go Brutus! I bet you got your muscles all warmed up and stretched without getting to hot is what made you zoom zoom around the course. I think you need one of those terry bathrobes, as long as it's FRENCH TERRY CLOTH!
Bonnie

I feel like clapping and cheering and I wasn't even there! That cool water energized the boy!

We just went to a pool party too! Water is fun...On our own terms...

Congrats on the agility demo!

WOW!!! You are SO my hero!!! I still think water is generally evil. But if you say it is okay, I'll take your word for it!

We love the water, that looks like SO much fun. Way to be fearless Brutus! We bet your mom is looking to get you one of the cool life vests they look pawesome.

Thats great that you managed the water and had such a great run!! I see a new swimming vest and....a SNAZZY french robe in your future for next summer ;-)

Dont worry, Dory, I am right there with you on the shore,..water is EVIL!!!!

What a great day you had!! It sounds like tons of fun.

Way to go Brutus! Maybe the air swim was a bit over the top, but you were very brave to go swimming with your pals.

I love the water!!!! The Posse has a little pool thatwe hang out in, but I've never been in a big pool!! That looked so fun =)

sounds incredible all of mine love to swim - so much so that i had to put a special filter on my pool - woodrow will walk in and out of the pool using the stairs he goes in swims a couple laps then exits and sits on the side - sweetie has a much different techniqure she runs full force right into the pool - if i didnt know better i would think she forgets its there several times a day!!

Brutus, that pool day looks like so much fun! We like the pool as long as we are with Mom. We aren't too fond of swimming yet since we still splash ourselves in the face so much. But Mom is determined that we will get the hang of it. Maybe you can give us some pointers?

This is the cutest funnest place we have ever seen!!!!!!! We wish there was one in Indianapolis! Glad you did great on your agilities!

Wow Brutus we are very impressed. We are not fans of water either.

Mommy makes us wear those silly vests when we're around water but just cause she thinks we'll sink!!!

I am still afraid of water....a little anyway. As a matter of fact I won't even go into the wading pool! You are very brave, Brutus!

Congrats on facing your fear Brutus!!

wow! what a great day! we're so glad you went in the water brutus, you rock! We can't wait to see more of your michael-phelps impersonations!

Brutus, welcome to the world of swimming! I'm proud of you, buddy! Now you know what all the fuss is about :-)
Your pal,
Sedona