Today's post is our entry to a contest being put on by our new furiends, Bentley & Lexus over at Munchkin Memoirs.  Looks like there is already some stiff competition, but it'll be fun to play no matter what.
This is a perfect contest for us, as Brutus' ears are one of his most notable characteristics - a classic example of the famous Frenchie "Bat Ears"!!  They have been really interesting to watch as Brutus has grown.   Initially in ridiculous proportion to the rest of him,  then "curling" backwards through his teething days, and now seem just the right size for his enormous personality.  They stay up even when Brutus is sleeping.  Only time I ever see them change is when he folds them back (I assume for aerodynamic reasons) when at a flat-out run.  We think Brutus can hear like a bat too - which isn't so great when he goes flying off the bed in the middle of the night after having "heard" something totally inaudible to the rest of us.  Either that or he's just crazy....
Interesting note that Frenchies are born with floppy ears, which then stand on their own starting at about 6 weeks.  No human modification (cropping, ect) is needed, or for that matter, allowed by breed standards.
I couldn't pick just one photo to post - so here are a few of my favorite "ear"resistable moments!  Bently & Lexus, chose whichever you want for our entry, I couldn't resist posting the whole "ear"volution of Brutus! 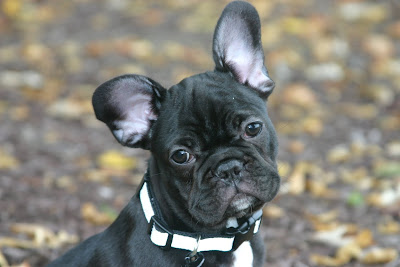 All ears at 3 months old. 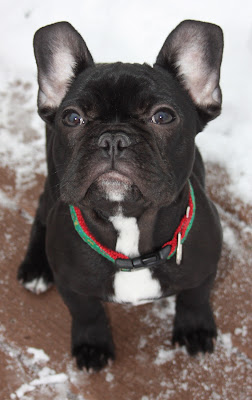 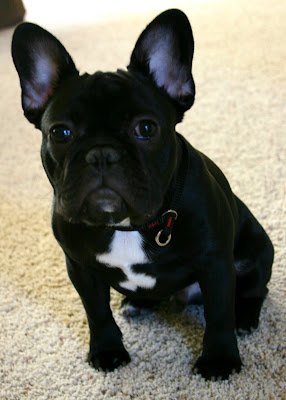 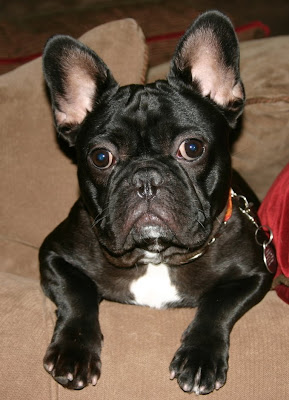 Simply "ear"resistible - one year old.
Posted by BRUTUS at 12:18 AM

Brutus!!
Yes, your are Ear-resistible!
Kisses and hugs
Lorenza

Those are all so cute, it would be hard to pick the best. The one I like is from the agility course where they are curled back and your toungue in sticking out. Double the cute!

My ears stick up all the time too, unless I am flat out running or it's raining. Gotta listen to everything. It's my job!

I like the "curling backwards at the tops, 5 months old" one the best. Such a face!

That is totally cool that your ears start one way and end up another.

Scotties are born with floppy ears too, but at about 8 weeks they are usually standing up by themselves.

My big old ears still curve a little at the top!

Mom says she wants to give your cute ears some smoochie kisses! MOOOOOM!

Brutus, your ears are absolutly perfect!!!! You are the total package =)

I'm with Dennis - I like the ear curling back at 5 months pic. I mean, all of them are great, but that one is the best! Great ears! (And I can't believe your Mom would suggest that you are crazy!!!)

Brutus has some pretty "ear"resistible ears....Thanks for sharing them through the first year of his life.

You should have heard momma oohing and ahhing at those ears!

Brutus, you are so handsome, the ears really make the Frenchie. Good entries, Mom is a little behind but I hope to have mine up soon.

Aw Brutus how sweet - they are all cute but we think the first one is the most ear-resistable!
love
Martha & Bailey xx

I love the five month old picture. That expression is to die for!

Oh and let Brutus know I tagged him for a neat little game. Check out my blog for details. :)

What a cutie! I think it was in your blog that I learned about Frenchie ears, how they flop back when they're young....cute, but cuter when standing straight up light a Frenchie's ears should!! :)

All the better to snort woo with!

Very "ear"resistible! You have pawsome ears Brutus! We can't wait to post your pictures. Our Mom is going crazy over those adorable ears. We will post your entries in our very next contest post. Thanks for entering!