Here comes the scarlet & grey, and it looks like Coach Tressel means business!!! 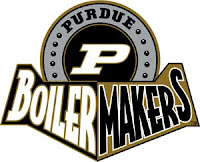 It's Friday already, so the Buckeyes are once again gearing up to play.  Another Big 10 opponent this week, the Purdue Boilermakers, on the road in Indiana.  We are planning to improve upon our 5-1 (4-0 conference) record, as Purdue football has a lousy 0-5 record for the season. Hopefully the offense can be a little more productive this week, since 21 of the 31 points against Wisconsin were scored by defense and special teams!
So with hopes of inspiring quarterback Terrel Pryor & his offensive unit, Brutus has rounded up a few buddies to help show some Buckeye pride! 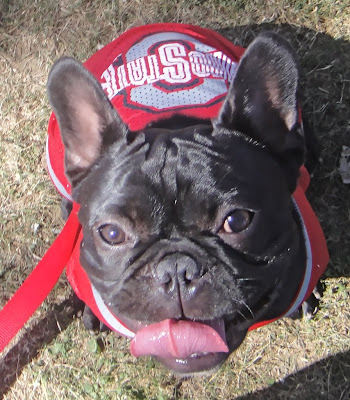 When we first saw this little Chihuahua cutie, we were hoping that Coco had come all the way from Malaysia to help cheer for our team!  We were a little disappointed when it wasn't her, but stopped to play anyways. 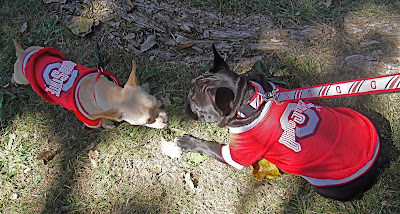 And this is Rufus, a Brussels Griffon - he is a big Buckeyes fan too!! 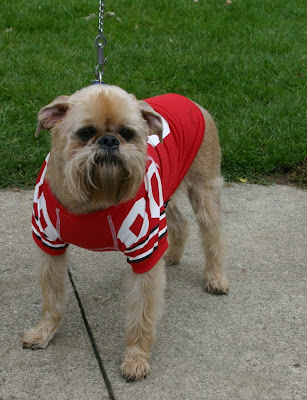 We saw this English bully on a Sunday, so his Buckeyes jersey was at the cleaners!  He's a Cowboys fan too, apparently.  As long as he isn't Uga (Univeristy of Georgia's mascot), any bulldog wearing a football jersey can hang with us! 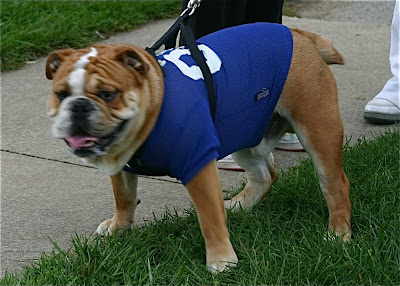 This guy is such a big fan that he had jerseys on both of his little terriers, in addition to the one he was wearing.  Too bad he was walking too fast for us to catch up...  Must have been getting close to game time and he didn't want to miss kickoff! 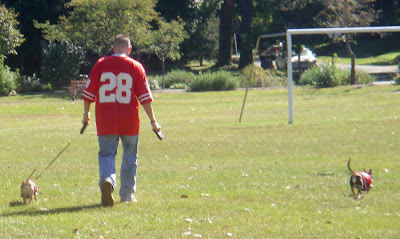 So if you have no one else to root for (or you've given up on the Wisconsin Badgers... LOL Sasha), join is in cheering for the Buckeyes at noon tomorrow!!
GO BUCKEYES!!!
Posted by BRUTUS at 12:30 AM

Uh oh, I think that game is right during nap time.

Good luck to your team Brutus! Seems like you've got a lot of people who will root along with you!

We don't know noth'n about football but we sure like those jerseys!

We told mommy to buy us some Dallas Cowboy jerseys so we that we won't look like odd balls!

Luv ya,
Riley and Star.

Well, since my school (DePaul University) doesn't have a football team, and the big state school (U of Illinois) is somewhat less than stellar this year and I've never really pulled for them anyway, Go Buckeyes!!

Oh, and all the pups look so adorable in their jerseys! Go Brutus!!

Um, I'd love to root (whatever that means) and all, but when Dad turns on football, Mom puts a teevee show on the computer and I fall asleep on her feet. So. Um. Go Whomever! I'm going to be napping!

Guess we'll have to say "go Buckeyes" for this weekend. Although we did get involved watching a VA Tech game last weekend. Frank Beamer, their head coach is a county boy and we like to watch his reaction to the plays. Our mom remembers when he was in the 7th grade - our great aunt was his teacher and she would take Mom to school with her.

Good lukhk and all those words the humans woo at each other!

O-H! The bucks are going to be awesome this weekend! Now to find some pit bull sized jerseys :)

Hope the buckeyes win for you again! :)

Hey Brutus!
Thanks for having such a cool contest, check out my entry on my blog!
I've not yet gotten into the football, cuz I've been busy rooting for my Phillies!
C-ya,
Murphy Dogg

Hi Brutus
Hope you are having fun in your house on wheels. thank you for sharing this crazy word. "SPLUBBEM" It sounds like a noise we would make. Good luck to you and those Buckeyes. Talk some strategy to coach
Benny & Lily

I did not know that Brutis is such a football fan, just too cute! Have a nice weekend!

Go BRUINS! We are UCLA alumni's :)

Hey there, thanks for being concerned about me (saw on Sedonas blog). I am doing great!! I will be back soon. Just taking a little break from blogging. =) Go Bucks!!!

Hmm sad news for your Buckeyes this week Brutus, as Purdue came to win!

Did the Buckeyes win, Brutus? Our paws are crossed!

It seems that a lot of good teams lost this weekend :(

I feel your pain. My Hokies lost this weekend too. Let's hope for a flawless rest of the season!

Hi Brutus, Were you named for that Buckeye thingy?
How is your contest coming?
Sorry the Bucks lost.