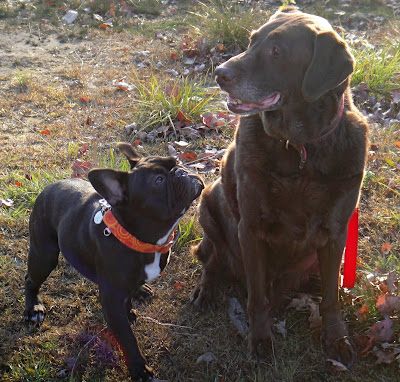 We're baaa-aack!
Hope some of you got to enjoy the Flat Brutus post yesterday!  I know everyone was looking forward to the next Earlventure installment, but our buddy Courtney did such a great post, we wanted to make sure you got a chance to see it!
Big Earl is all cleaned up and went back to his resting place today. Phew!!  Why is coming home the most exhausting part of a vacation??  Now I have no excuse not to get back to our regular blogging schedule!
After the first two days of start-and-stop (see Part I), our travels were a little smoother.  We made lots of little stops over the next few days, exploring ME and MA.  On the way we crossed through VT and RI, just making a few brief stops to stretch our legs. I snapped this quick photo as a momento for Mason, who took this (in addition to many other) opportunity to relieve himself in VT! 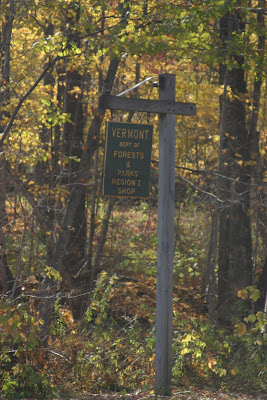 Next stop was for a shopping excursion.  We've learned that all Cabela's are RV-friendly (including dump and fresh water refilling stations), as well as pet-friendly (dog walks, kennels, and even corrals for horses). 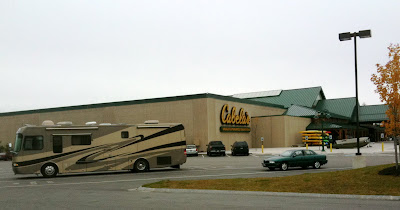 While Paul & my in-laws were shopping (they bought fishing poles & an air mattress), the boys and I got in a good walk and some photo ops outside the store.  Brutus was happy to do a brief photo-shoot, and got met a bunch of new admirers!  It was quite chilly, so he is modeling his "Bad Boy" Juicy T in these pictures. 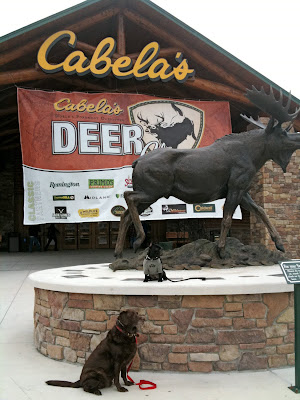 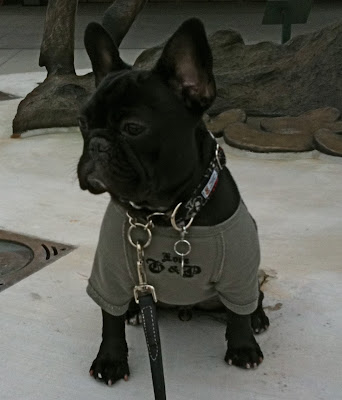 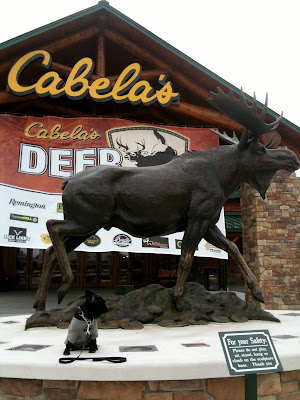 Mom, this moose makes me nervous... Can you get me down form here?
Then it was on to see the east coast.  Since it was Saturday, Brutus changed into his OSU jersey for the drive.  The Buckeyes were pathetic at best (beaten fair & square by 0-5 Purdue!!!!), so it's just as well that we could only follow the play-by-play over the internet. 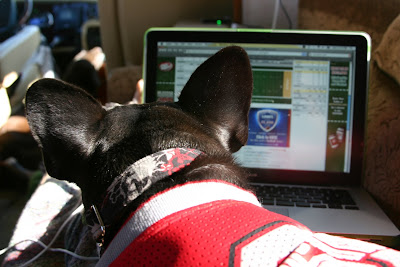 Mobile internet is the best!! 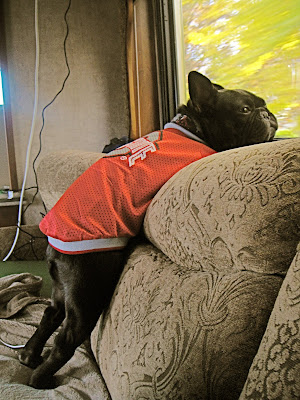 Not worth missing the fall scenery for that game!! 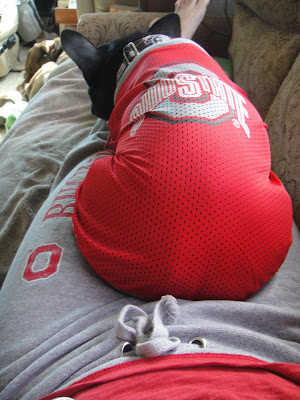 All the team colors in the world won't help the Buckeyes in this game.  I think a nap will be much less stressful than watching them loose!!
Finally we arrived at the shore.  We stopped in York Harbor, ME so that the boys could get their first sniffs of the salty ocean air.  It was a cold and blustery afternoon, so we didn't venture far from the coach. 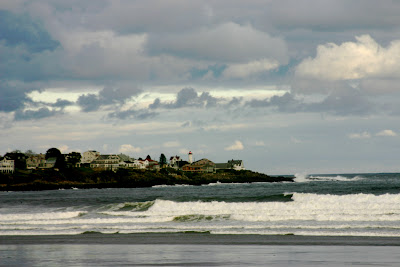 Our first view of the ocean, York Harbor 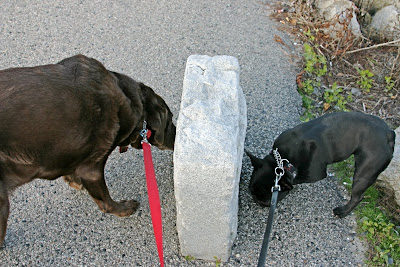 The first thing that Mason & Brutus did was to check the pee-mail! 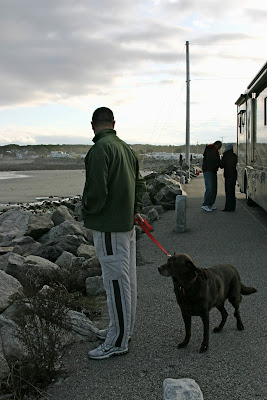 Here's Paul & Mason soaking in the scenery.  That's my in-laws in the background. 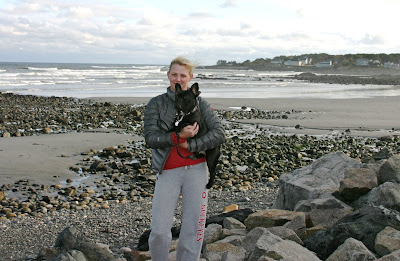 For once I got to be IN the picture, instead of behind the camera!! 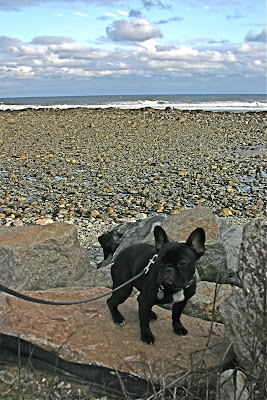 Brutus wasn't sure what to think of that big noisy lake behind him... 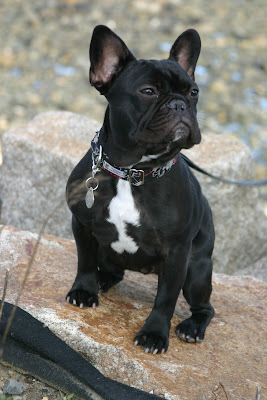 ... but eventually relaxed enough for a good photo!
We got back into Big Earl to warm up after that brisk outing, realizing that we had all worked up quite an appetite!  A quick search of the local restaurants on my trusty Macbook turned up Bayley's, a little local seafood place with a lot of history!  It was off the beaten path, but quite the find! 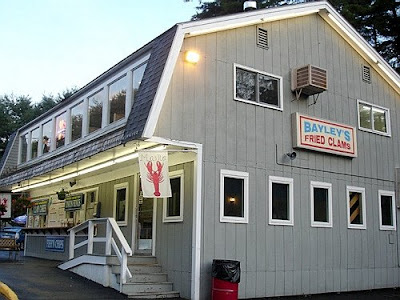 Legend has it that you are supposed to eat lobster in all the months that end in "-er".  How could we go wrong at such a great little place??? 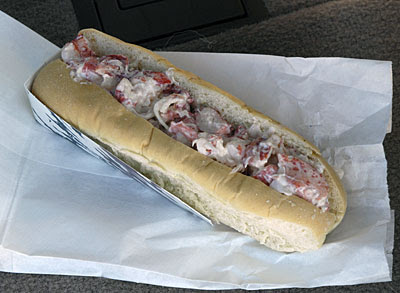 Paul and I ordered lobster rolls (which were fantastic, by the way)... 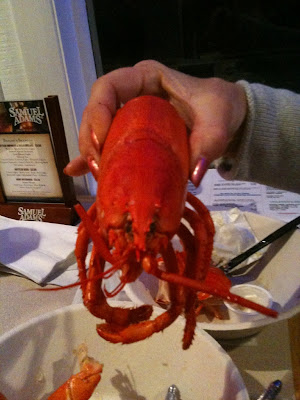 ... while my mother-in-law tackled a whole Maine lobster!!
After our bellies were full of delicious chowder, clams, and lobster (and the boys got their usual boring kibble - shhh, don't tell them!!), we found a place to park Big Earl for the night.  Since the camping the night before was a little much for my in-laws, we found them a nice Marriot where we could stay just outside in Big Earl with the boys.  Other than a few remarkable traffic maneuvers by Captain Paul, it was a pretty uneventful day (no parts to replace -yippee!!), and we were all ready for a good nights' sleep. 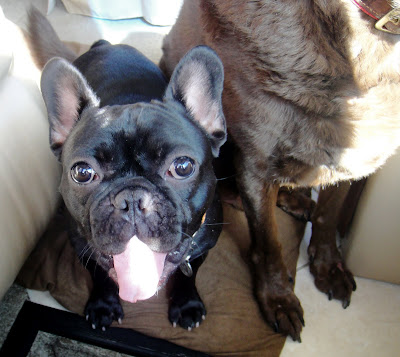 We say goodnight with a big yawn from Brutus!
Be sure to turn in tomorrow for the final installment of our Earlventure!!
Posted by BRUTUS at 7:33 PM

I somehow missed reading your travel posts til now! What a great adventure you are having. I am SO jealous of you two lucky dawgs!!

Mom LOVES that picture of the Brute looking out the window. She says he looks like a cute, little old man! BOL

Oh Brutus you look like you had an awesome time on your trip with Big Earl. What's better than a home on wheels. That lobster is looking awfully good. Forget the months that end in er...mom would like it all the time. Does your friend have bad breath? Is that why you are giving her that look!!
Nite-Nite
Benny & Lily

WOW!! brutus, that was quite a trip. You do look so cute looking out the window at the scenery!! Looks like you all had fun and so sorry about the game!!

Glad that you are back!

What an adventure.
Sally Ann

Looks like a GREAT trip!! And the ocean? What is this ocean thing? But I'm with you wireless internet on the road is The Best! Some very handsome shots of you, dude! (And Mom agrees, Cabela's are GREAT places to stop - we've never stayed at one overnight, but we've stopped en route a couple of times now, and they are great!)

So, is Big Earl done for the season, or do you guys get to go out some more? We have a race this weekend, and then we are going to southern Utah for a month, and then the House With Wheels will stay down there where it is warm, while Mom and Dad and TaiChi and Bufus and I come back home so we can play in the snow!

Oh it sounds like you had a great time in Maine! And now you're making me hungry for chowda and lobsta rolls!! I love love the pics of Brutus!! He is such a cutie!!! And both Brutus and Mason look like they enjoyed the trip!

Dear Brutus:
I envy your chance to travel with Earl and your humans, particularly the fact that you could bring your home with you. Whenever I leave our cozy apartment in Manhattan the bracing reality of travel and adventure never quite overcomes the discomforting dislocation of not having one's home around.
I do hope you got a taste of the lobster rolls which I have heard reported are tremendous.
Sincerely,
Randolph
www.adogabouttown.com

What a LOVELY trip! How brave of your mom-in-law to eat whole lobster. I just love the picture of Brutus on the rock, too.

Mom has drool running all over after seeing those lobster rolls!

She had some in Freeport one time and she's still smiling!

Wow what a fun Earlventure! That food looked awefully good. We loved how you slept in Big Earl in the parking lot of a hotel...BOL Can't wait for the last installment.

We have been waiting for this Earlventure post! However, we did enjoy your previous post on Flat Brutus.

Ya know, I am just now figuring out that you live with a labradork. Who knew?

You were right to worry about that moose. It could have totally squished your small self and then there would be two flat Brutus's (Brutii) at your house.

You have a most excellent observation post in Big Earl to watch the world go by.

Hi Brutus, Welcome home. That was a grrreat trip you took. I have two favorite pics. The one with you and the moose and the best is where you are standing on the couch looking out the window.
I had a super fun day yesterday. I can't wait to tell all about it in my blog today.

What an awesome time you had on Big Earl!! Mama is jealous of that nummy looking Lobster Roll!!!

Brutus is just about the most adorable thing there is and when you put clothes on it's multiplied by a million!!!

Those lobster rolls looked great - made my mouth water. I love seafood!

Brutus and Mason, what an adventure you were on. I love seeing you in all those places and how fun to be in Big Earl nice and comfy cozy. You looked kind of little next to that big gynormous moose thing, be careful.

You look absolutely adorable in your jersey peeking out the back window, Brutus. That's our favorite picture but we have to admit - the lobster roll one comes in a close second!

What a wonderful trip!!! That lobster looks delicious too. We love all the pics but our favorites are the one of Brutus looking out the window from the back of the sofa, the one with you (such pretty eyes you have), and the one where you say that Brutus relaxed for a good shot - awesome photo.

Have a great weekend, the OP Pack

It sounds like you had a great adventure - we love how animal friendly that Cabelas is!! And that is one of our peeps favorite shopping places.

What a grand adventure. My mom person has a growling tummy remember how yummy lobster rolls are on the East Coast.

We're feeling quite sorry for ourselves since our little 1986 Coachman motor home didn't get to leave the back yard at all this year. At least we get to have adventures by watching you!