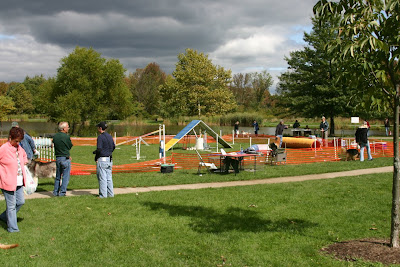 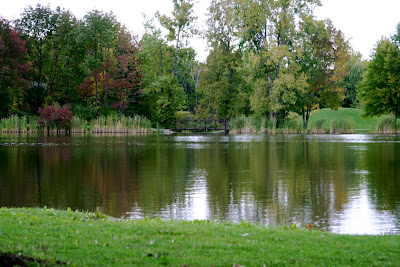 This was the lovely setting for my Sunday with Brutus.  One of the members of our agility club belongs to a church that does an blessing of the animals at this picturesque park every year. There were all sorts of animals that brought their humans out for the day, including a few cats on leashes & even a goldfish in a bowl (its' leash wouldn't stay on apparently...).
The event draws a good crowd, and was nice enough to also host an agility demonstration as part of the celebration. So not only did Brutus get blessed, he got to practice agility as well!  We encountered a whole lot of new furiends, and even taught a few of them how to do some agility. Brutus & I couldn't help but think of some of our blogging buddies when we met some of these dogs! 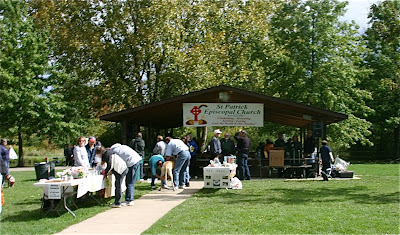 I think the entire congregation of St. Patrick's was on hand to help! 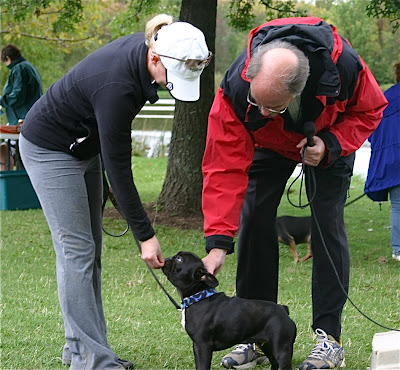 Brutus has never been the religious type, but we'll take any blessings we can get!  His blessing was specifically for his health and safety. 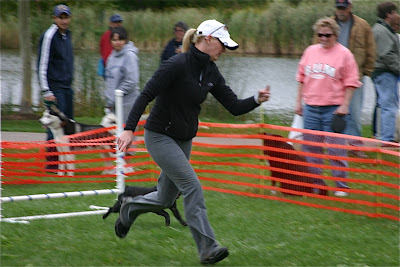 After that serene moment, it was a real change of pace to do some agility! You can hardly see him, but Brutus is flying along just behind me.  Think that might be one of Khrya's cousins observing? 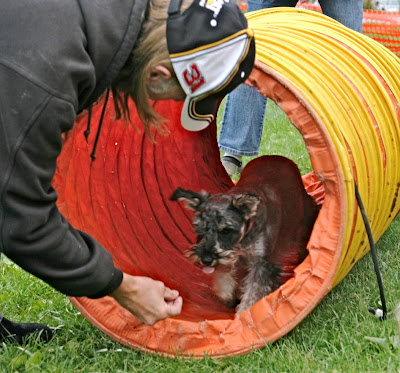 This little Schnauzer was a natural at agility!
We thought of Oskar when we met him! 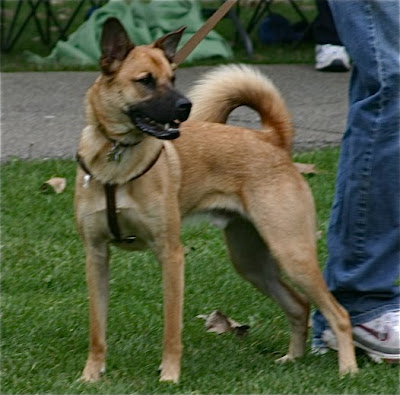 This guy reminded us a little of Brownie (well, except for the fluffy tail!) 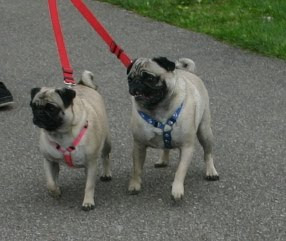 Here's a perfect pair of pugs - it seems that you can never have just one?
We have so many pug furiends, I'm sure we'd leave someone out if we tried to list them all!! 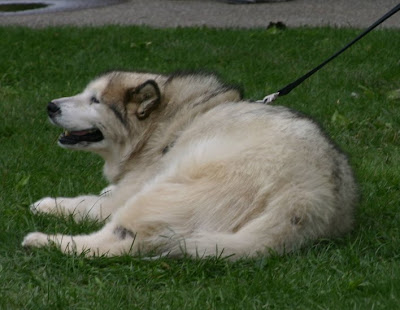 Might this be a another long lost relative of Khyra??
The 50F temps still seemed a little too toasty for her! 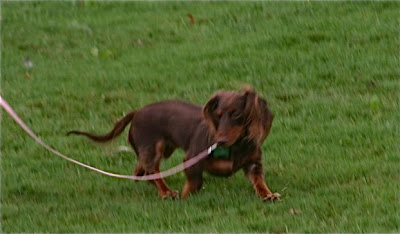 Although not nearly as well-dressed, this gal reminded of of Lorenza & Twix! 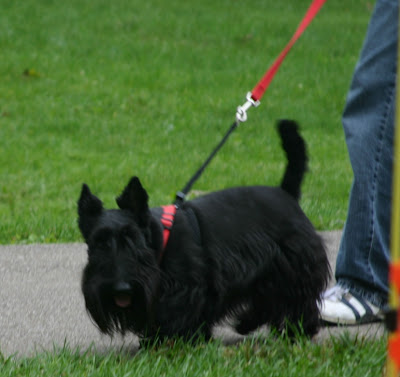 And could it be??  Finally we spotted a Scottie!
Lilly, Piper & Carrleigh (the Rocky Creek Scotties), Jazzi, and the wee Bonnie, here's looking at ya! 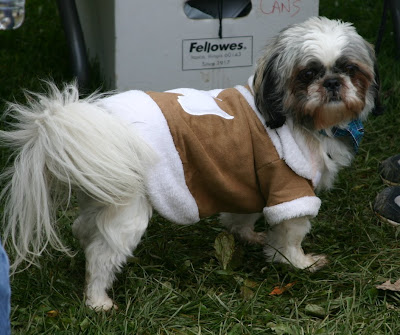 This is Gizmo - he even tried some agilities (sheepskin coat & all)!
Sasha, we think he might make a handsome boyfuriend for you! 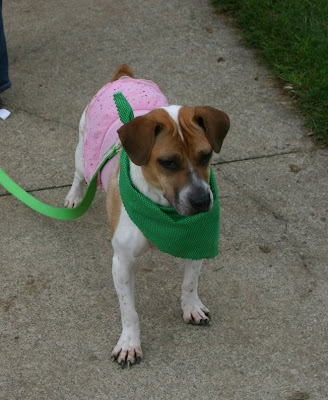 And speaking of romantic interests, this little princess had serious eyes for Brutus! 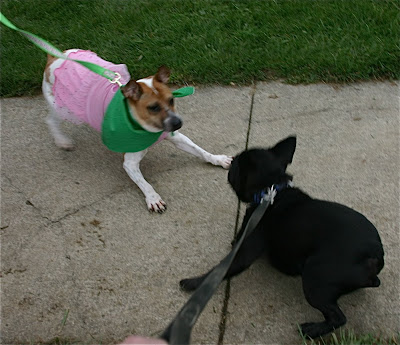 A mutual play-bow and they were instant pals.
Now, if we could just do something about her some fashion choice.... 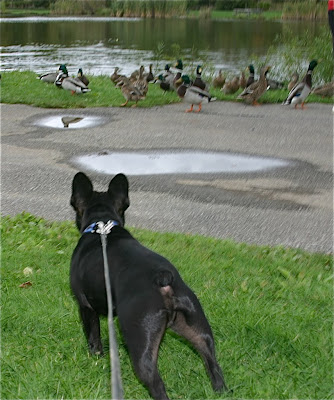 Sadly there were no Duck Tolling Retrievers here, but we looked thoughtfully at the waterfowl in honor of our girl Sedona!
It was the perfect way to enjoy a beautiful fall day, and Brutus & I managed to release some of the pent-up energy we had both accumulated during the preceding long week!  Brutus came away a little more blessed, and A LOT more muddy!!  So it was home for yet another bath for Brutus, shower for me, then a nice nap for both of us.  Gotta love Sundays!
On the heels of yet another Buckeye win (33-14 over the Hoosiers!!) on Saturday (that would make our record 4-1), the day was a perfect ending to a classic fall weekend.  Thanks for sharing it with us!
Posted by BRUTUS at 10:36 PM

No blessing fur the OSU pets?

Brutus, what a nice day. I approve of your choice of a match for me. It looks like a little lady took a liking to you as well. The pictures are really pretty. I am glad you got blessed so you stay healthy for a long, long time. Looking forward to our game on Saturday.

What a super fun day you had, Brutus! You sure did meet lots of new friends!

It looks like you had a WONDERFUL weekend... a blessing, furiends, new anipals, fun with agilities practice... What more could one ask for!

We also came over to let you know that we posted our "Ridiculous" contest entry on the end of this blog at: http://countrycorgis.blogspot.com/2009/10/puppy-playground-continued-contest.html

Making a Puppy Playground is just one of the MANY things our people have done to spoil us! They love us LOTS!!! OC and the Corgi Country Crew

We're thrilled that you saw a Scottie!! Thanks for sharing all of those wonderful pictures today - looks like you had a great weekend.

What a fun weekend! Lots of new friends for you and Brutus!

both you and your mumsy looked really good running together.

i agree that your admirer could do with some fashion tips - if you're keen on her, maybe you can send her a copy of "Sex in the City?"

chikisses from your other admirer
coco

I think that gal looked fetching in her little outfit. You should ask her out. So many doggies! And you are a total blur doing your agilities.

We think you are already blessed but it can't hurt to get it done again.

Those other doggies all looked very nice but we agree that girl doggy needs to watch that tellyvision show "What Not to Wear!" BOL!

Thanks for thinking of me, Brutus! Those ducks looked *yummy* :-)
Wish my human's church did a blessing of the aminals! My human told me that when she lived in Siena, before the famous Palio races they would actually bring the horses into the church to the blessed...those crazy Italians!
Your pal,
Sedona

Looks like you had quite a fun day Brutus. Always making so many new friends. and even a girl caught your eye. Very cute.

Hi, Brutus!
Sure you had a pawesome day!
A blessing, meeting friends, agility games!
Kisses and hugs
Lorenza

Wow, there sure were a lot of different types of doggies there. Sure was nice of you to teach some of your furiends how to do agility.

Glad you had a fun weekend.

Thanks for the shout-out guys. My mom has always wanted to do agility with me, but we don't know if I'm too old at 4. We're going to check it out in the spring.

Getting blessed looks like a good thing. You can never be too careful (or muddy).

My mom person is a little nuts. She laughed and laughed about the goldfish.

looks like you got to meet some pawsome doggies