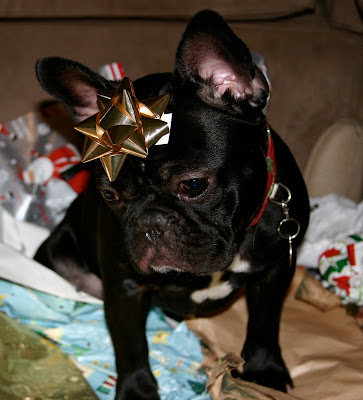 As I promised yesterday, here are the rest of our Christmas photos. We awoke to remnants of snow still on the ground, before it turned wet & windy. The weather outside was frightful, just not in the way you picture it in the traditional holiday sense!! We didn't let that dull our celebrations, and started the day off by unwrapping our presents here at home. Brutus didn't hesitate to jump right in! 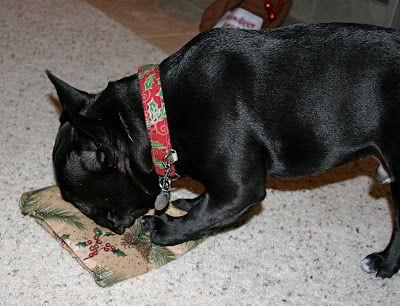 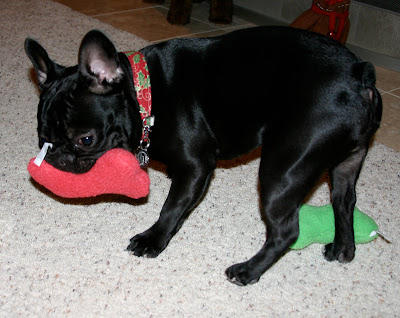 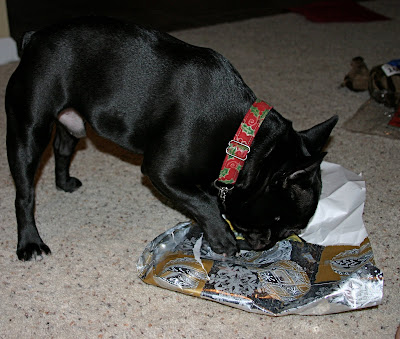 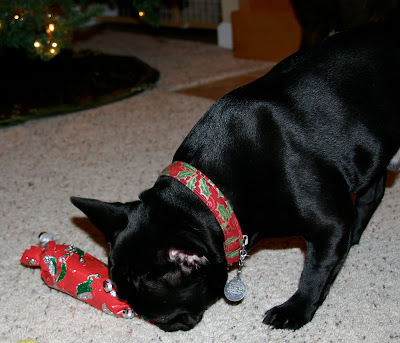 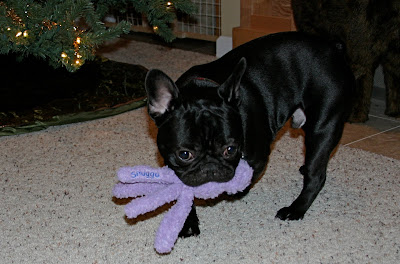 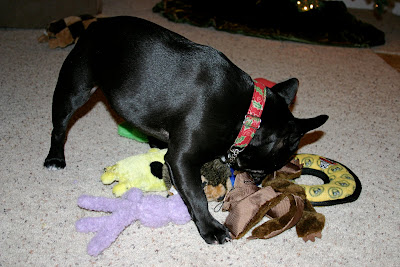 Pretty nice stash here! Better make sure I guard them all from Mason!!
(Note from mom: none of these stuffies have eyes!!) 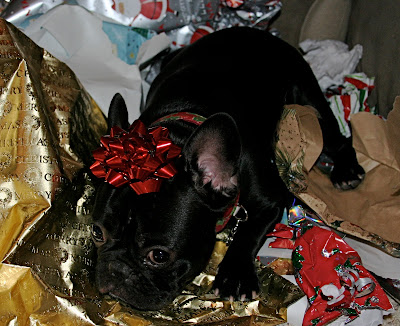 Phew! All this unwrapping wore me out!
Many of you inquired about the Turporken I mentioned yesterday. Since you asked..... 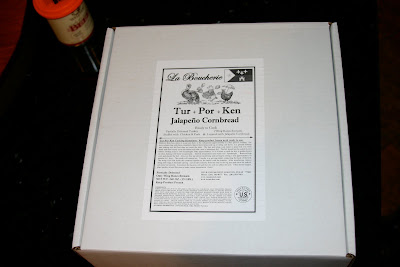 When we started hosting part of Christmas at our house, we started having Turducken. It was something my husband had heard of via the NFL commentator John Madden (he awarded turducken to the players of the Thanksgiving Bowl winning team), but apparently has been in existence since the early 80s. Looks like a turkey form the outside, but it's already been deboned, and stuffed with a duck that is stuffed with a chicken. Interspersed between all those yummy layers is cornbread stuffing.

We served Turducken for several years, but the duck part had limited appeal (maybe people were weirded out by the fact that "turd" was how the name of the thing started?). Anyways, we switched to Turporken (pork instead of duck) and have never looked back. We order it was jalepeno stuffing, so it's got a nice extra kick. It comes vacuum-sealed & frozen, shipped in a cooler from Cajun Meats.com. We order it a few weeks in advance, and it arrives the week before Christmas. 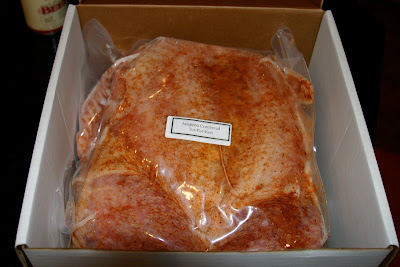 After spending a few days thawing in the fridge... 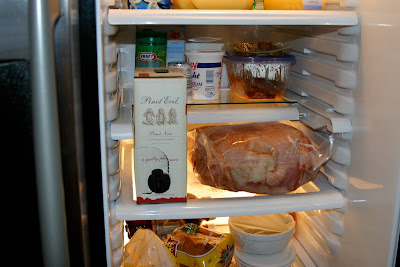 All we do is baste it and throw it in the oven. Easy as that. 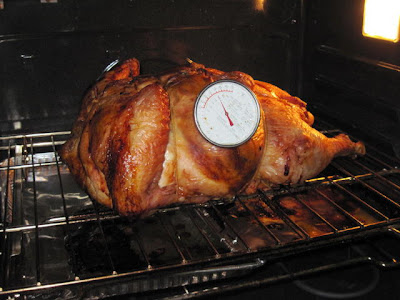 No messing around with dressing the bird or any unpleasantries! Baste it with butter every hour, and in no time you've got a fabulous holiday feast!! 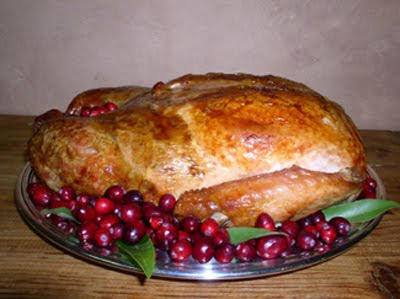 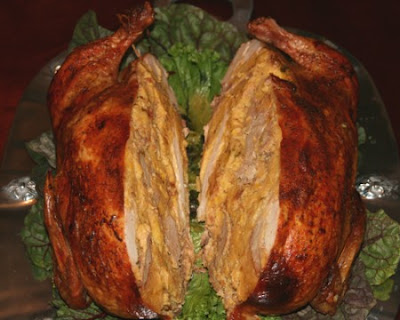 In case you want to see even closer (look at all that cornbread stuffing!!!) 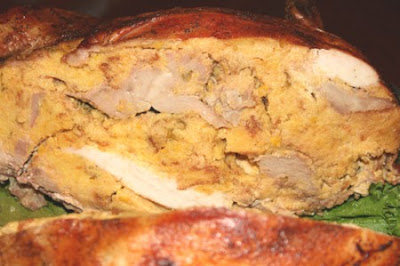 It's super easy to carve as well, since there are no bones! Just slice it like a loaf of bread (an electric knife comes in handy here). The only problem is trying to tell the difference between the chicken and the pork parts!! There were leftovers (only because the bird was huge), so we're still picking away at the remnants. It might sound hokey, but there's nothing like a turporken!! We've never had anyone over who didn't love it. In fact the only one who wan't happy with it was Brutus, and that's only because he didn't get any!! Here's how he feels about that: 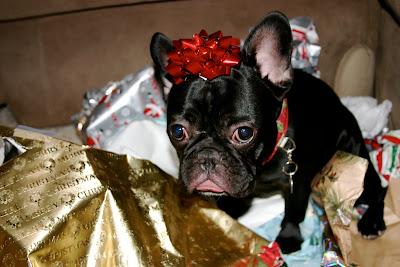 Geez. They humiliate me, and I don't even get any turporken!!
Posted by BRUTUS at 10:55 PM

Wouldn't want to give him pork and make him sick but it sure looks yummy!

Brutus, here is my holiday dining tip....sit near a small child. They drop everything...or if the guys are watching football on the TV...sit in there with them....they get excited and drop stuff too. The ladies NEVER drop anything.

Love all yer stuffies...that is quite a haul!

Bonnie
Note to yer Moma from HER....SHE is gonna try the TurPorKen. She did the Turducken but no one cared for the duck bits.

It's great seeing you open up presents!!! I didn't bother to wrap the kiddlets... plus they got their toys a week early!

This turkey port think your family had sounds interesting. Unfortunetly pork gives me a belly ache... glad to hear your family loves it!!

Brutus, furiend, it looks like you made out like a bandit! What a great Christmas you had! We used to eat some doggie wet food called Turducken! BOL!

Hey Brutus, You got some grrreat loot from Santa Paws!! I know just how you felt when the last pic was taken. It took me two whole days to get back to my normal self.
Mom had turducken in New Orleans. She liked it... butt she likes duck though. I think your mom and dad ate it beclaws... they are sure the BUCKS are going to eat the DUCKS alive (or cooked).
Now for that thingy with your mom and the eyeballs. She seems to be very concerned about your love for the delicacy. I guess you might want to give that one up for ever... just to keep the peace. Butt, there are some things that just require consumption.
You know, like bread twisties, and napkins, and newspapers, and magazines. I finally had to tell mom that the RULE IS... if it is on the floor... it belongs to ME. If it belongs to ME... I can do what I want with it. Buddy, I'm not giving up my "finds" for New Year's Resolution. You can... butt not me. I'm just sayin'.
PeeS... I'll admit that I once ate THREE eyeballs in one week. It was all worth it. You should have seen my mom... out in the yard... looking for things that might be looking back at her. hehehehehehe

Brutus what great gifts. You must have been a good boy. We love your collar too!. That large bird scared us. We were glad to see it was moms gift. It did look yummy tho
Nitey nite
Benny & Lily

I LOOOOOVE pork! It's my favorite meat!

And that Snugga looks like the most comfy thing ever.

Hi, Brutus!
You got very nice presents! No eyes?? Hmmm...
Thanks for telling us about the Turporken! It looks delicious!
Sorry you did not get any!
Kisses and hugs
Lorenza

okay..Mom is ordering that ...will look online now to prepare for next year!! Yummmm...

You got some very nice gifts!!!

Yumm! That looks realllllly good!
They should send the bones along extra for those Christmas dogs! :p

Not quite as nice as getting Stella for Christmas but those toys are a close second! :p

It sounded good up until the jalapeno part. I am SO not a hot and spicy person!

It looks really yummy, though.

Brutus is gorgeous! We have never heard of Turporken before... mom is not a very adventurous eater, but we'll think about that

Boy you got tons of gifts! Great haul Brutus.

Brutus is so cute...My son and his girlfriend have an old english buldog and he is sooooo cute his name is rufus....he really enjoyed the doggie bones I got hime for Christmas!!