Hello!  Hope everyone had a good weekend.  Brutus and I were busy, and we had an... umm... interesting weekend.  Allow me to explain.
As you might remember, we participated in our first APDT (Assoc. of Pet Dog Trainers) rally trial.  Similar to what we did last month with AKC, slightly different rules & a little more of a relaxed venue.  I thought it would be a cakewalk, and a good warm-up for our big show later this week.  Boy, was I wrong....
The exercises were actually harder than what we thought (although certainly not beyond what we can do), so that was one surprise.  The other was that I had a completely different bulldog with me - crazy & reactive.   Of course I was embarrassed, but moreover confused as to why Brutus was so stressed and obviously miserable.  I wondered if maybe he was not feeling well or something (he threw up a little the night before), because I hadn't seen this bad of behavior out of him EVER!  Had I done too much recently?  Is this a new adolescent growing pain, or the start of something even worse???
Thankfully Brutus did pull himself together somewhat and had two decent tests, both of which had good enough scores to Qualify and win our novice dog/novice handler division. 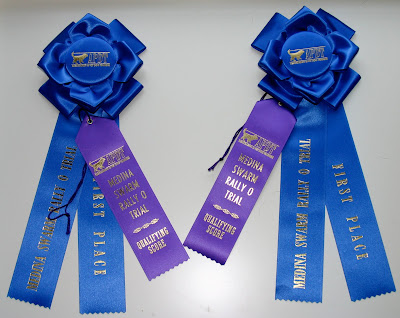 It might be a while before I know the answer to some of those other questions, but the reason behind at least part of the behavior did become apparent; Brutus wasn't feeling well.  I suspect he had quite the bellyache.  Wanna know why???? 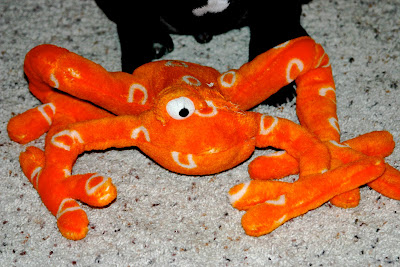 On Friday I noticed that one of our long-time favorite stuffies, the alien frog, had become a cyclops.  I didn't remember him missing an eye, but it had been a while since I'd seen him.  I looked around for the eye a little, and it crossed my mind that it could be somewhere I wouldn't see it - Brutus' stomach.  As our devoted followers may know, Brutus has a history of ingesting inappropriate things, including a pair of my underwear.  His default maneuver when he doesn't know what else to do with something is to eat it.  And Brutus had thrown up a little Friday night, but had otherwise been acting normal.  Hmmmm.......
And so the truth came out, so to speak, last night.  After a day of unusually nasty gassiness, Brutus woke us up in the middle of the night with some projectile vomiting, the contents of which included the froggy eye in question.  Good thing his digestive tract has a good "reverse" gear, or that's two expensive/risky surgeries Brutus would have now required for foreign object removal!  I guess it's mostly good news; no more wondering where the eye went, no impaction, only some minor laundry to do, and a possible explanation of why Brutus was so awful at the trial.  Certainly conceivable that he just didn't feel good, and didn't know how else to let me know he didn't appreciate being at a dog show??
Anyways, here's the aftermath of what will henceforth be referred to as the "eye incident" 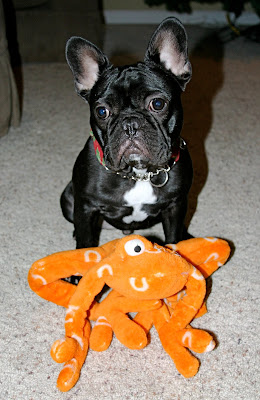 The other eye??  I don't have the faintest eye-dea what you are talking about, mom. 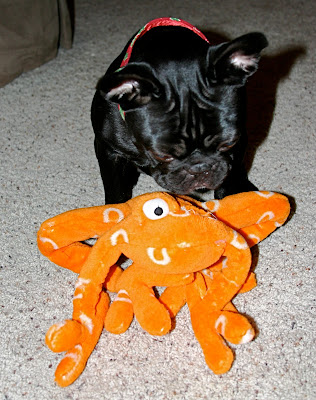 Oh, look at that, froggy IS missing an eye....
How on earth did that happen??? 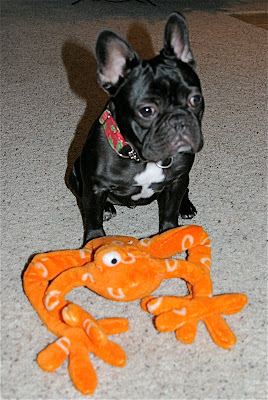 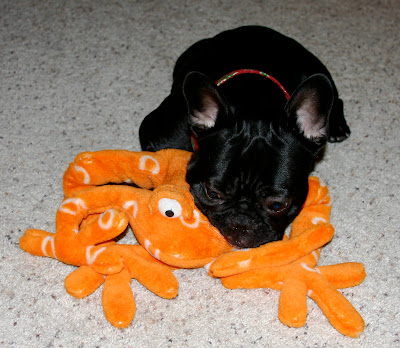 Ok, ok.  I guess you have all the evidence you need to convict me.
Sorry, Froggy. 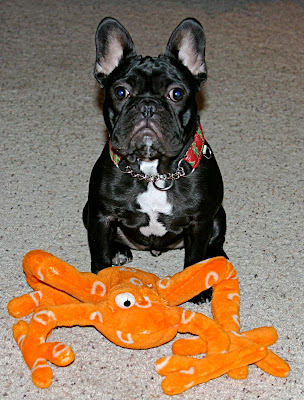 So lucky it was ejected without too much drama!!

Well Brutus,
We all ate those things that we shouldnt, I have those moments and it all comes out in the end!! lol

Glad that you are feeling better and stay away from the eyeballs!!!

Monsieur Brutus...first of all congratulations on the awards. second: remember reading our blog about our blind babies? After you pull all the babies eyes out, you are suppose to spit them out. No swolling eye balls. Now Rest
Luv,
Benny & Lily

I admire how you were able to maintain such a dignified expression when you were eye to eye with the evidence of your misdeed!

Oh no, Brutus! Did the frog MAKE you eat his eye? Stuffies can be tricky like that... pure evil, with their doggie peer pressure. I'm sure your mom will understand.

Stumbled on your blog by accident and what a treat!!! And then read the frog eye post and that is exactly what happened to my lab Smoke when he was 1 yr old. He swallowed a frog eye from a toy that looked about exactly like the one on your page. He had to have an expensive operation because it got lodged in his intestines. That was a long time ago and Smokie has now passed away. Miss him dearly and I will continue to look at your posts. Brutus is AWESOME!!!

I'm sure you were just protecting your momma from the evil frog. My Pops told me that bright colored frogs are all evil and venomous!

Brutus, you are so lucky that eye came out!
Winston, once ate legos and had surgery, $5k. later he was fine. Funny thing about that story is that Winston never ate anything again after that!
I'm glad your feeling better!

EYE guess you could say that froggie's eye is "Frenchie" toast. hehehe

Eeek, glad no surgery was involved! You give one good innocent face Brutus!

Congrats on your win! They say true athletes can rise to any challenge and push through pain so you sir, are a true athlete. It sounds like a very stressful day but I am glad all seems well in the end! My moose does not eat all the small toy parts he tears off but he will eat anything food related so I always worry. I hope the froggy had his other eye removed and destroyed by a professional stuffy surgeon to avoid another such accident! If you need a referral, I suggest Benny and Lily who seem to have an in-house clinic for stuffy surgery!
Moose + Dana

Hi, Brutus!
Congratulations! I am sure you have a special place for all your ribbons!
Glad the eye is out and you are ok!
Take care
Kisses and hugs
Lorenza

You are so fortunate that the "eye" needed to see the light of day again and decided to come up instead of going down!

And Java is a bit perturbed that you would even consider that Mason did that - no self respecting Lab would ever ingest something that it shouldn't! BOL!

We're glad you are feeling better.

I am with you. When i doubt hide it in your belly. It will come back eventually (at least one hopes).

Maybe you should eat an eye before every competition given how you got a couple of blue ribbons and all.

I'm glad that eye decided to come out again. Freya has the same problem as Brutus. So far she either get it out the way it came in or out the other passage. I've been lucky. I can only hover over her so long and can't protect her from everything.

I spy
with my little eye
something round
on the ground
not so yummy
in the tummy
made Mom worry,
I'm so sorry.

Wow, you are so lucky he got it out that way. Maybe it is time to do some surgery and remove that other eye before he gets another notion to eat it.

No fun doing rally and stuff when the belly isn't feeling good. Good thing you are such an attentive mom to the symptoms.

Wow, that eye must have been yummy for you to go through all that trouble. Bet you're not gonna eat the other one any time soon!

Glad to hear he was able to get it out, nothing worse than having to go to the vet for something like this...

Congrats on the ribbons! Imagine what you can do when you're feeling better.

PeeS: Our mommy no longer gives us stuffies with eyes, noses or anything he can bite off. Umm wonder why!?!?

Congratulations on the ribbons!! And it looks like the EYEs have it! Heehee. Definitely better to throw it up than to try to get it through those twisty-turny intestines. Besides, if you don't throw up every once in a while, your human will get off-guard!

oh yes, the eyes are the first to go on all stuffies in our house. then the fluffy filling is yanked out. finally all we are left with is the floppy skin that they all really love.
hugs,
puglette
:o)

Hey!... that's quite an achievement - winning your division when you are feeling quite under the weather!!!
Although it is quite a scary story, we are glad it all turned out well...Brutus, you are a special dude...don't go de-eyeing any more of your stuffies!
Take care now and lots of licks.
We are so impressed with all your training and achievements!
MAXDOG IN SOUTH AFRICA

Oh Brutus!!! Don't you know it's not a good idea to cause the humans stress?? Stress makes them act very weird and unpredictably. Unpredictability is not good, especially around meal time. Congrats on your wins though. Proves you are a champion to pull off that kind of performance with a frog eye in your gut. Bravo.

Congratulations on your wins! You're such a star!!

Please dear Brutus.. don't worry me like that again. Eating stuffie eyes just isn't a good idea. I'll make sure mom takes me to the doggy deli tomorrow to find you some more delectable things to nibble on!

Congrats Brutus on your awards....

NO NO NO please, no more eyes for snacks pleeeeease as you worry moi too.
you can't be serious munching on tasteless eyes......awww Brutus, stick to bully sticks next time, will ya?

Poor Brutus! So glad all's well that ends well. Stop scaring your hoomans with that inappropriate ingestion, OK buddy?
I am so impressed at your Rally results! I'm just finishing up my Beginning Rally class and hope to compete in my first trial in Jan or Feb. Any helpful hints?
Your pal,
Sedona

"Reactive dog" is such the trendy term these days. Kind of like the ADD kid who takes Ritalin... ggeeshh. Brutus was prolly just in the mood to be, well, whatever... and i do remember you pointing out before you went that you hoped to have a good dog instead of the other kind of dog... sometimes thinking it makes it so!

besides, NAUGHTY dogs RULE! (except if it makes them sickie...i'm so sorry about that and glad he was able to cure himself!)