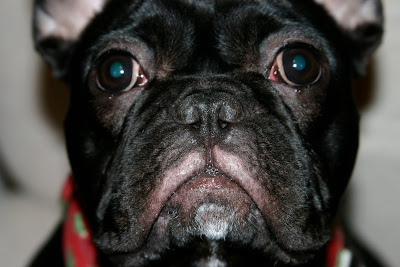 Hey everyone.  You are bound to notice sooner or later, so I might as well get this out in the open...  Brutus is having a bit of a depigmentation issue on his lips.  The good news is it doesn't bother him.  The bad news is that I don't have the slightest idea what's causing it.  Brutus tried to tell me it was from wearing out his lips smooching his girl Stella, but unless he's secretly flying to CA and back every night, don't think that's the case!
Started with some little pink spots about 2 weeks ago & is spreading across his lips.  Actually looks worse in photos than it appears in real life, must have something to do with the way the flash reflects off the pink parts. No sign of inflammation, or any other trouble anywhere else on his body.  There is actually hair there in the pink parts, so it's not alopecia. Could it be some sort of allergic reaction?  Autoimmune disease (vitiligo)? Snow nose (like what yellow labs get)?  Hormonal change (liek an adreal problem)?  This phenomena is not a common in Frenchies, so none of my experts in that department have had any insight into what might be the cause.
Your guess is as good as mine, since as far as I know nothing else has changed.  I switched Brutus to a stainless steel food & water bowl last weekend, since I read that plastic/ceramic can cause a contact dermatitis. He is on a very high-quality, restricted diet, absolutely no people food, and eating the same kibble he has for months.  Only other thing I can think is that this started with the onset of really cold weather here, so maybe that is a factor.  The depigmented parts are only where his tongue can reach, so perhaps that has some bearing on things (although his lips do not look chapped) as Brutus is a bit of a lip-licker.  Could it be related to added stress from all our recent activity with showing?  I'm really reaching here, but he got a distemper/parvo vaccine about two weeks before I noticed the depigmentation, so maybe that triggered something.  Who knows??
It's always something around here.  Brutus keeps me on my toes, and I'll admit I'm a worrywart.  Between problems with his pee, eating things, miscellaneous lumps/bumps, and now this - yikes!  But that's the way Frenchies are - never a dull moment!  Don't worry, my vet has seen Brutus (we are "frequent flyers" there, I'm sure they think I'm nuts), and will be seeing him again next week - she's not particularly concerned at this point, just wants to follow him & see if it might resolve on its own.
Anyways, thanks for letting me vent. Frustrating when something like this goes on where we humans have no idea why, and no control over what is happening.  If it's just cosmetic, than I can live with that (Brutus' self image is apparently better than mine, since it seems unscathed by this change).  Brutus is his happy, vibrantly energetic self in all other ways, so hopefully it's nothing significant & will go back to normal soon.  If anyone has any thoughts, we're all ears (some of which are bigger than others)!
Posted by BRUTUS at 12:21 AM

I have heard some dogs have this happen because of their food/water bowls. Rubbing their faces against certain materials can cause it.

hmmm I must have read over the part where you switched him. Stainless is supposed to solve this issue if that is what caused it

We are baffeled. Maybe the new dish will help.

Personally Brutus, I think you need a little pizza, some chips, ummm maybe a few bites of steak, and those ole smackers will get back to normal!!
If not, you still look handsome as ever!!!

We have no idea why this is happening but we do have to say how cute you are, Brutus - pink lips or not! MUAH!

Oh no! I hope you get things sorted out. I know with some Maltese their black points will fade if they aren't in the sun too much. Maybe some extra sun bathing will darken him up??

Hmmm... looks a little like when I temporarily lost my immune system and got the mange. But they can test for that so you would know.

Not a very manly look, I must say. Hope you figure it out.

Hey there!
These things are probably best left to a qualified Vet to diagnose.
What I can say is that Max has something similar - due to his drool. The continuous 'wetness' around his jowels causes his skin to look like that. His only solution - for me to try and wipe regularly...an almost impossible task. Also - it doesn't bug him at all. But as I said - it could be many things - best consult someone in the know.
Holding thumbs for you.
Max's mom in SA

Carrleigh gets a snow nose/lips when the weather starts cooling down, but Piper is never affected by it.

We have to agree with our friend, Snazzi Jazzi that a little bit of pizza or steak would help the matter tremendously.

Dunno....maybe a vet would know? Anyways, I think he looks very kissable!
SMMOOOCH!

Bonnie
peeesss...my nose used to be BLACK and now it's brown. I get lots of ribbing from Puff about being a brown noser. It's still black around the edges. Vet said get more sun, but hey, this is Floriduh....how much more sun can you use?

Thanks for your concern everyone! Don't worry our vet has seen him & is keeping an eye on things - she doesn't feel any action is warranted at this point since all else is WNL.

I'm thinkin' that Big Earl could come out of hibernation and take you to someplace warm and sunny. That may help.
I still think you are very much handsome.

You are TOTALLLY still uber handsome Brutus. We hope the bowl switch helps!!!! Harles has one tiny dot the size of a marker tip on his face that's depigmented... so you guys can be buddies! BOL!

Hmm.. doesn't he have separation anxiety? Could he be rubbing up against something, like a crate door?

You look like you need a tube of chapstick, Brutus!

Don't worry Brutus, your still very handsome! I'm glad it is nothing serious!

Hmm, other than allergies and mange (which I don't think he has) maybe he needs more supplements in his diet? Or he could be stressed by all the activity.

If he has been itchy than normal, I'd lean towards allergies but that's mainly cause I have an allergy dog and I usually blame it on his allergies.

Good luck on the diagnosis.

ryn: Freya still cause fights for no reason that I can think of. Then the next day they are kissing each other all the time. Honestly, I don't know what to make of it all maybe it's jealousy?

BOL! We checked Stella's lips to make sure... Maybe they've been smooching the computer screen?

Gunther occasionally gets a little hairless around his lips. It's from chewing on his Kong too much and it literally rubs the hair off his lips. I hope Brutus' hair loss wasn't a result of the Bully stick. I'm sure that might have rubbed on is lips a bit. If so, Stella is looking for something else to send her boyfriend! Perhaps she'll send him some Chapstick...

My first thought was snow nose (Sibes get it too) due to the cold weather, but I don't know if that's possible on the lips. Storm's lips don't change color, just her nose.

I'm a worry wort too, so don't feel alone. I hope you figure it out soon.

Hope you figure it out soon - if your vet isn't concerned about it, I am sure he will be fine.

We hope the new dish helps. Don't worry brother Brutus, I have scar tissue that keeps developing on the top of my nose. Mom has to remind folks it's not boogers.

Hi Brutus, hope you figure it out soon. Your mom sounds a lot like mine! Worrywort central over here at my house!

it kind of looks like the pug's contact dermatitis. hopefully the change to the stainless and ceramic bowls will help. charlie, our black pug gets something similar and we treat it like acne by using clearasil cleansing pads. you know, those little smooshed faces get so close to everything when snuffling around. as long as he's feeling frisky and fun like always, we wouldn't worry too much.
hugs,
puglette
:o)

Brutus...you are lucky to have such a wonderful Mama that looks after you so furry well!! We just know that the V-E-T will make it all better!!!

Oh Brutus..poor baby you are still adorable. My Lily has allergies and even went to a dermatoligist..a couple bills later.she still has itchies. Not me...Feel better..maybe you have chapped lips
Benny & Lily

I know LOTS of stuff, Mom says I am a 'know it all' actually. But I am stumped on this one. Glad its not hurting ya buddy.

Huh, interesting. I wonder if the cold weather has anything to do with it? I have experienced some odd things (behavioral and illness) related to shots, so I wouldn't be surprised if he is having some kind of reaction. Sometimes reactions manifest themselves in odd ways, ways we wouldn't ever think! I'm glad to hear your vet isn't too concerned. A few weeks ago Candy had a horrible mark on her leg... I could of sworn it was a spider bite, but Seth assured me if it was a spider bite then it must have been the worlds largest bite! I worry about stuff too... most of the time it ends up being nothing, so here is to hoping Brutus wanted a little permanent lipstick.

I hope it's nothing serious... maybe Brutus is just raiding your lip gloss? My Momma likes to use lip gloss, and it makes her lips that color too.

We don't know what could be causing that on you Brutus. I am sure your Vet will give your mom a good explanation!
Take care
Kisses and hugs
Lorenza

I bet it's the smooching!

I'm wondering if it could be fungus since you said he licks his lips alot. I know humans can get fungal infections in the corners of their mouths and that is what made me think of it. Just something else to think about.
Snuggles,
Twix