So the holidays are officially over. Thank goodness! The partying of New Years' Eve followed by victory celebrations from Ohio State's big Rose Bowl win was just too much for Brutus. I think many others might feeling be the same way.... 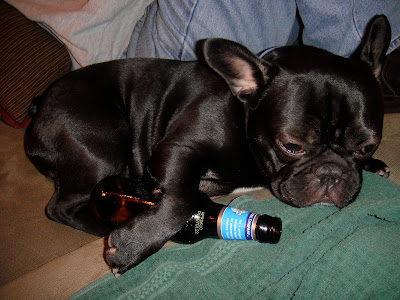 As I sit looking out my window into a quiet, snowy January morning, there is so much to recount from the last month. Lots of good times with friends, agility fun, gifts (both for me & for Brutus) that I've yet to post about - I don't know where to begin. Through it all Brutus made sure he was included in as many activities as possible, including keeping tabs on house guests during the OSU game (that's Paul's friend Joe making a cameo appearance on the blog). 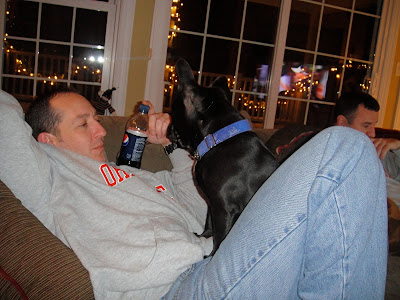 At least it gives me a good amount of material heading into the next few uneventful-looking weeks! Is it just me, or do you all find that there is either too much to post about, or not enough?? I don't really know where to start, so I'll share something simple, yet miraculous that should make everybody smile. Along with the beginning of the new year, a few new lives have begun.
First, there are two new human babies in my family; my new nephew Mitchell Alan, and a new niece, Isabella Grace. Mitchell was born on November 25, the first child for Paul's sister Julie. What a handsome guy, don't you think?? 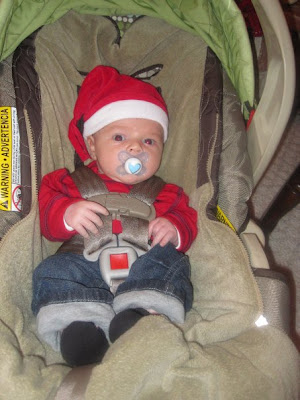 Arriving less than a week later was Isabella Grace, born December 1st. Here she is all dressed up for Christmas day - can you imagine anything more precious? 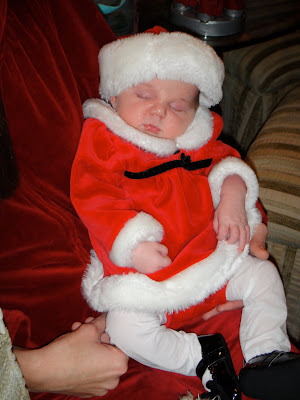 And I couldn't resist including the only picture I've seen of both of them, capturing a rare moment when they were both awake: 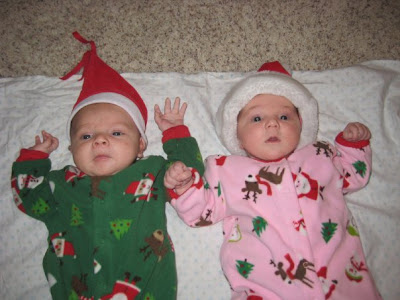 One more miracle arrived just before the end of the year. At my friend Courtney's farm, a baby donkey arrived. Little Scooter McGee was born in the wee morning hours of December 30th. I got to visit him when he was just over 12 hours old. 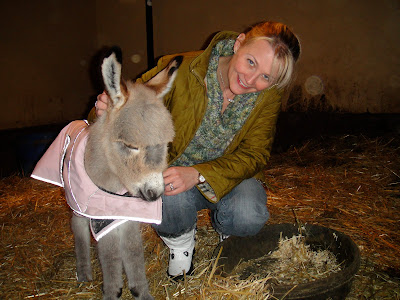 What a cutie! He is actually a miniature donkey (that's mom Shadow standing in the background), so tiny that this dog coat is too big for him! 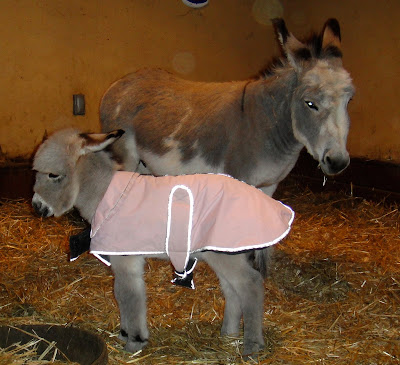 So adorable right down to his little feet! Courtney call these markings "ankle muffs" - too cute! 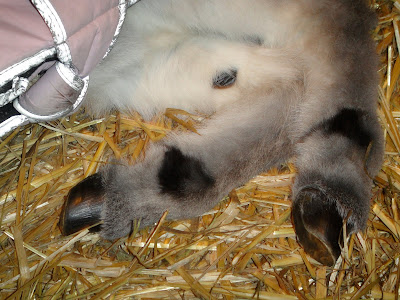 I'm happy to report that all three of these babies are doing well and so are their moms!
Well, time to do some serious cleaning & organizing to get the new year off to a good start. SO much to do, ugh... I'll just mention briefly that Brutus and I had a fun time at the agility trial this past weekend, LONG days but a good experience overall. I've got some really entertaining videos to share, as soon as I can download them and figure out my new editing software!!
Far be it from me to not include enough dogs in the post, so we'll leave you with a shot of the boys playing in the (ever-increasing depth) snow! Stay warm & cozy, we'll see you soon! 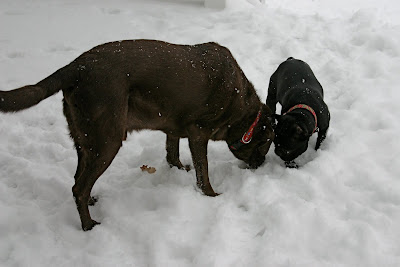 No offense to the human babies, but that baby mini donkey is the cutest. Makes me wanta get a farm.

Ah how sweet! Puppy humans! Little Miss Isabella Grace shares the same barkday as my Mr.! Love the picture of them both in their sorta matchin jammies. Brutus, looks like you had a very happy new year. Hope yer headie doesnt hurt too much! The only sad thing about the holidays being over, is college football is winding down. BooHoo!
Bonnie

I agree. I either have a ton of things I want to post about or I have nothing and have to search

All of the new babies are adorable!!

Congrats to Ohio State on a Rose Bowl win!!

All those babies are just too cute for words!

The babies are soooo cute.
Yep the snow is building up in my yard too. Think Spring.

New babies for a new year...pretty cool! They're all adorable

Those human pups sure allow themselves to be dressed up in some whacky outfits.

I like the tasteful jacket on the little donkey better. He is a cutie.

Have you recovered from the big Buckeye win and New Year's eve celebrations yet? BOL

All those babies are real cute. Thanks for sharing them.

Mom os going awwwwwwwwwwwwww, the human babies are so beautiful. And we have mini-donkeys about a quarter of a mile from our house. That little guy is a lot cuter than the noisy guys up the street.

We look forward to hearing all your news.

I want a donkey pup too! It's like the cutest thing ever! Soooooo cute!

Pops says that you have to hide it from Japanese videogame makers, or they'll steal it and put it into one of those UFO catcher thingies.

Oh Brutus! Did you have one to many on New Years? BOL...We love those little humans. In a few months they will be letting you taste everything they are eating. And we love your hairy friend. What a cute baby. Will mom let you bring the baby hairy thing home? Have a snortin and snugglin night
Benny & Lily

What a perfect way to start off the new year with new lives. Cute babies!

your new niece and nephew are so cute! they look adorable in their christmas outfits. but that baby donkey...squeeeee!! oh my gosh! i must show hubby so i can get one too! i keep telling him i want a donkey and daughter says we should get a mini cow. can you just imagine a mini farm?
hugs,
puglette
:o)

Woah Brutus you partied like a rock star for sure. Thanks for sharing the human pup pics too, they are cute!

I agree with the others - the babies are cute, but my goodness, I LOVE THAT LITTLE DONKEY!

Can't wait to hear all about the trial!

Oh my goodness, all the little cute bundles of joy!! That donkey is precious!!! So are your neice and nephew...;-)

I have also been on over/under blog load and plan to just go with the flow...

Yup, that mini-donkey is just the cutest! You can send both of them to Rugby!! :p

The hooman pups are just adorable all decked out for the holidays and Scooter McGee is just too cute for words!


I love the cute donkeys too. I had to show them to my humans..they love Donkeys!!

The baby donkey is too cute! I love her little pink coat.

I can't wait to see the pictures of your super agility weekend!

THOSE BABIE ARE PRECIOUS! AND THE ANIMAL BABIES ARE CUTE TOO. BOY, YOU GUYS DID HAVE A NEAT HOLIDAY.