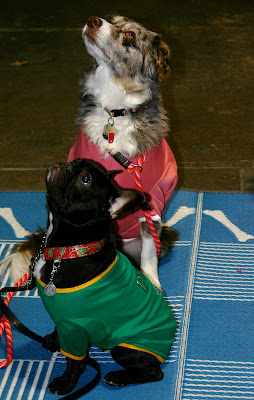 Another post from the backlog! Just before the holidays, my friend Courtney & I participated in a team event at our agility club (Medina Swarm, click to check it out or look us up on Facebook). Courtney has been so busy with baby donkey Scooter (who is doing well & getting more feisty by the day), her blog is sort of in hibernation. So I'll gladly accept the honor of posting about our fun day!
This was not a competition per se, more a fun/practice day. We chose our teammates very carefully, since surprisingly Brutus had many offers (this was obviously based on a cuteness factor, not skill!). Courtney ran our mutual friend Jenn's dog Kylie, an Australian Shepard who is AMAZING at agility. 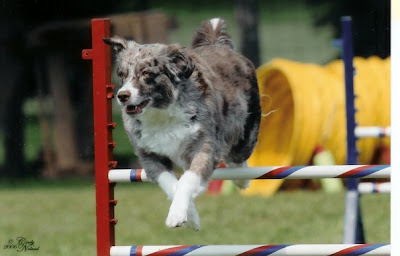 Next job was to drum up some team spirit, including a catchy name and clever the team uniform, both for us handlers as well as the canine part of the team. Kylie is such a good girl & has a little reputation for being a Princess. Brutus is small but mighty. Jenn (Kylie's mom) suggested Princess & the Pea, and I took that one step further to included us humans in the team name: 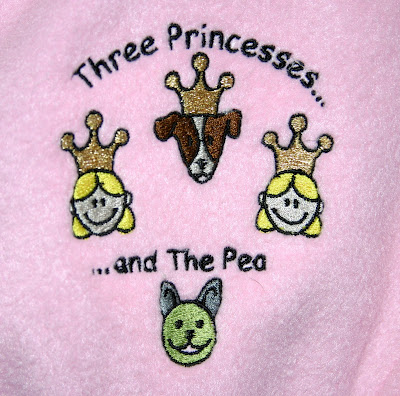 We brainstormed to come up with a fun logo, and (being the princesses we are) had it monogrammed onto pink fleece jackets. Courtney found some fun t-shirts with a big rhinestone pawprint, so we also incorporated some bling into the uniform! 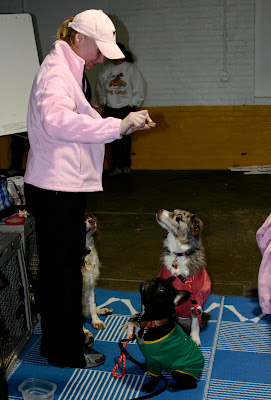 Courtney and I have been said to look alike, appropriate since we seem to have been separated at birth! Courtney's mom MJ (the very same MJ that provides my boys with yummy cookies) came to watch, and actually had me confused with her daughter!! 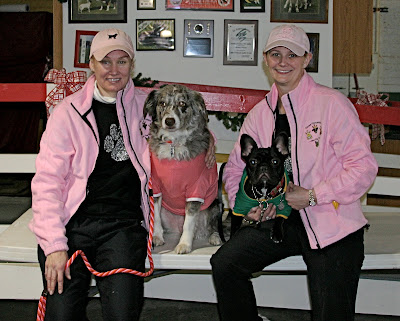 Lest they feel left out of, we also designed apparel for the pooches, including a little bling for them both! In case you can't read it, Kylie's sparkles spell out "Princess" and Brutus' says "Pea" (on green, just as a pea should be!). 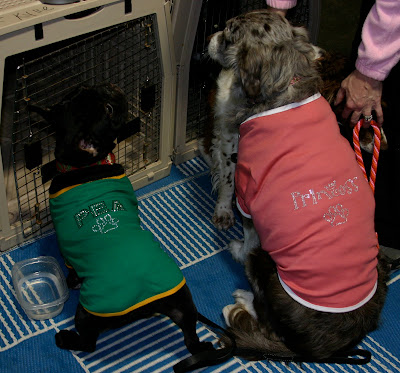 To this day Brutus continues to be referred to as The Pea, so apparently we hit the nail on the head with the team name! 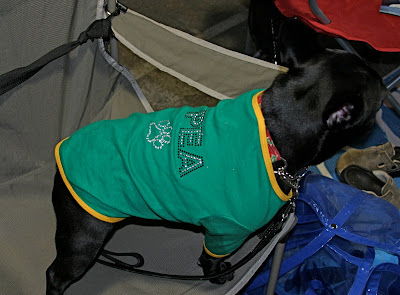 Courtney ran Kylie wonderfully, although we had to be handicapped as Kylie competes at a higher level. We argued that Brutus WAS the handicap, since he was running courses ABOVE his normal competition level. We were also the only little dog/big dog team. Although we had some wonderful runs (including an amazing relay event) team 3P&P finished in the middle of the pack. Perhaps we didn't win, but we certainly looked good - and I think that counts for just as much!!

So what's your vote?? Who is the blonde in this picture - me or Courtney??? Even the dogs seem to be confused about who's who here!! 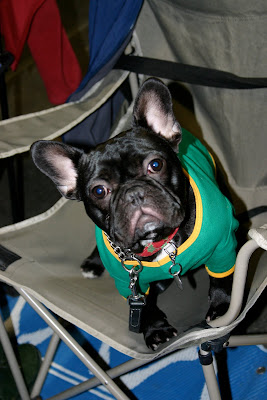 It was a fun day and good practice for actual competition. Speaking of which, I still plan to post about our adventure at the agility trail last weekend! A professional photographer snapped some amazing photos of the Pea in action, so I'm hoping to get those soon. I did have someone video us as well, and as soon as I can figure out my new editing software (anyone used Final Cut??) I'll post some film footage that is sure to entertain!!
Posted by BRUTUS at 9:05 AM

Cute outfits!!! Love the wee Brute in green. Sweet Pea indeedy! As to which blonde is which, I'm so blonde I'd have to sniff you to tell.

The PEA... not to be confused by the PEE.

Cute pink outfits. The Brutus certainly stands out in that crowd.

Too much fun for sure. Team Brutus was the best looking no doubt. I kind of like Pea for him too.

Looks like everyone in 3P&P had a great time! Great outfits, great bling!

wow it looks like that was a lot of fun! I love that he is the pea :)

My guess is that it's you in the picture!?!

Love the team spirit and outfits!!!

Sounds like you had alot of fun. Love the outfits - the pea seems to fit Brutus :)

Just like you can't tell us apart, we are having a hard time telling you two apart - We think that is you in the picture but aren't pawsitive.

What a great team name! I love all the jackets and shirts! Glad y'all had a good time :-)
Hugs and Tail Wags,
Dixie

What a great time you all had! We love the handsome outfits!

Looks like you in that picture to me! What a fun team name!!!

Wow! Those look like some awesome outfits! Keep making these team outfits and your closet will start to catch up to Lorenza's!

What a fun adventure you all had. Thanks for sharing with us. We love your nickname! And that ain't your mom in the picture.

Look, I'm really impressed, but don't you get tired ever? I wonder if I can talk mom into doing that stuff with Frankie. That'll keep my sissy busy and tired so I can have my breaks. Good luck with the rest of the pre-training competition!
Twink!

I love your logo! Very cute clothes. I also liked all your gifts you got on your Jan. 6th post. I have been so busy at work and getting back in the swing of things after the holidays, I am falling behind in reading all my favorite blogs! I'm trying to play catch up!
You photography is amazing to me!

Cool Brutus. We love your logo and the fact that you are the pea...BOL...You are so darn cute. It is so awesome you are in the agility club. Mom wishes Lily liked it, but she screamed.
Snuggles and gasers
Benny & Lily

Wow, you guys must have been seperated at birth or something. There should be a rule that you can't be matching like that - how could ANYONE tell you apart?! LOL

Your team name was very appropriate too, great uniforms!

Paswesome team!
Your outfits are great too!
Kisses and hugs
Lorenza

You look like you're all team players...what fun! Maybe I should switch from showing horses to working with my girls....That could be interesting!!!

I think you do need to help Tanner get on an exercise regiment! You make one cute Pea.