How to Train Your Frenchie.... I mean DRAGON

Hope everyone had a great weekend! Since that recent burst of winter was still lingering, we luckily had lots of indoor plans to keep us busy here.
Have you heard of the new Dreamworks movie "How to Train Your Dragon"? 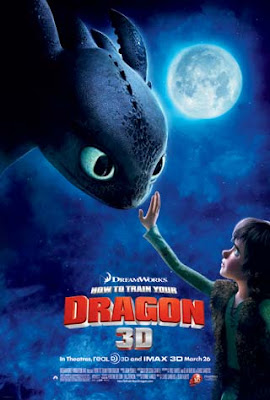 Paul and I saw it in 3D on Friday night - we both give it five stars! GREAT movie - better than Finding Nemo or Monsters, Inc. Good story, great animation, fun characters, fantastic sense of humor, lots of action, nice message... LOVED IT!

What made it even better was that the one of the main characters, Toothless (a Night Fury dragon), seems to have been modeled off Brutus. He looks like Brutus, sounds like Brutus, moves like Brutus, acts like Brutus. Other than the fact that he is ten times bigger than his human instead of ten times smaller, has wings and a long tail, Toothless IS Brutus!! 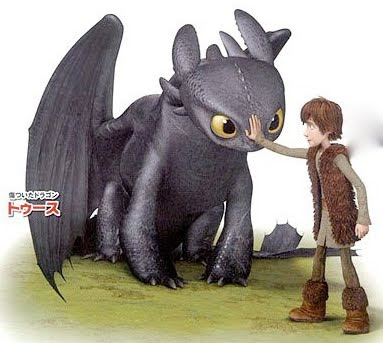 The expressions on Toothless' face and how he reacts - I'm tellin' ya, if Brutus could fly, this IS him!! For those of you with high-speed connections, here's a little clip from the actual movie, see for yourself:

I mean... It's not just me, right? There is definitely a strong resemblance, you can't deny it! 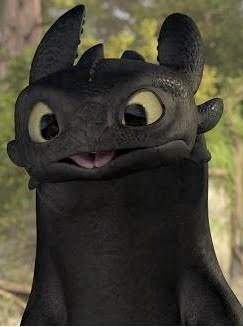 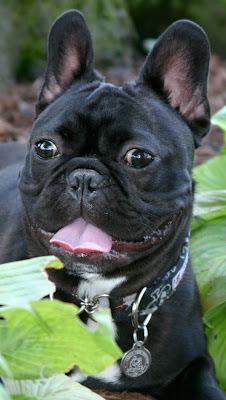 And speaking of training.....
It just so happens that I really was training my "dragon" over the weekend! 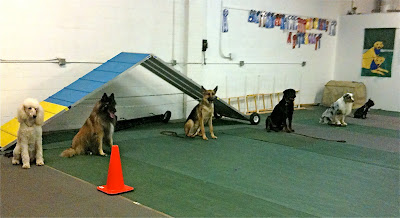 Brutus and I attended a 2-day seminar called "Are We Having Fun Yet?". It was an obedience workshop presented by well-known dog trainers Betsy Scapiccio & Linda Brennan. Lots of great information, and it all focussed on using all sorts of "games" in training to keep it fun for your dog. It went so well, Brutus is getting his very own dumbbell now (an object used for retrieving in the more advanced exercises).
Anyways, here are a few photos of Brutus in action at our weekly obedience class. Not that there is much "action" going on, as we were practicing the sit/stay exercises that are part of the "Novice" competition sequence. See my little Night Fury, the last dog over here on the right end? 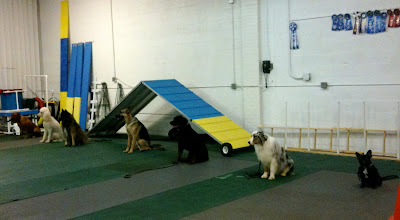 Here's another shot, this time the down/stay. As you can see, Brutus is the only "little" dog in the class. 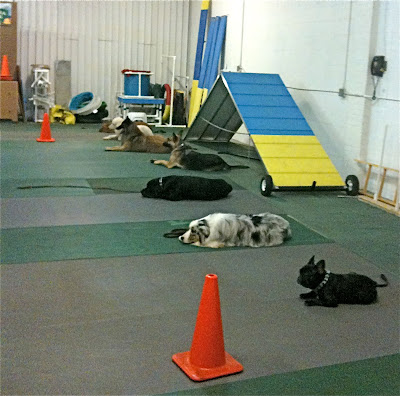 The dogs are required to remain stationary for up to five minutes. In the "Open" level, the handlers are required leave the room & are actually out of sight for the duration of the exercise. But for the time being, I'm just happy that Brutus has come far enough to control himself to this extent when I'm across the room, even with the instructors intentionally creating distractions (like throwing/bouncing balls around the dogs) to challenge him!
Tune in tomorrow for some Flat Brutus updates! It was a busy weekend for the little flatties, so lots to tell!!
Posted by BRUTUS at 9:22 AM

He looks EXACTLY like Brutus! That would be an easy halloween costume! LOL

LOL, that was very funny! Brutus you DO look like the dragon! Maybe you can be a stand in!!
Have a great day!
Deborah

We can DEFINITELY see the resemblance!

Brutus the Dragon!! Maybe that is what you were in your "previous life"!

Thanks so much for the movie review...Mama has been looking forward to seeing it but didn't know it was out yet.

Now that you mention it, I CAN see the resemblance! Do you s'pose those animator peoples have been looking at our bloggie?

And a FIVE MINUTE sit/stay? That's almost a year, isn't it? Gosh, Brutus, that is some kinda discipline, my friend. Yay for you!

I can't wait to see that movie. My youngest niece wants me to take her so I'm making plans to do so in the next couple of weeks - but now I'm even more excited.

Great Job to you and Brutus on the seminar activites.

Agree. Guess yu can start on next year's Halloween costume!

Oh my Frenchiness, where do I begin???

Mom doesn't have the patience to sit through a movie at a theater. She can only watch them at home so she can do 50 other things while she's watching the movie. She's gonna watch this one so she can check out the Brutus look-a-like!

How do you get Brutus to sit that long?! Mom is getting Betty to sit longer and longer for picture taking, but it takes a lot of telling her "Betty... ch, ch...STAY! STAY!" Oy, it's tiring.

Mom keeps wanting to ask you something about Brutus too... It's kinda embarrassing. Does he recycle his poo like Betty does? Blech. We hear a lot of Frenchies do that.

Your post helped our mom to get over her "Repo Man" movie experience. Avoid that movie if you have a weak stomach for violence.
Twinkie

I'm excited to see that. I do see a resemblance

One of Mom's students told her this movie was really good! We will have to watch it soon. Those expressions do look like you Brutus! ;)

We definitely see the resemblance!
You're so smart, Brutus! No way can we do a down-stay for 5 minutes! Five seconds MAYBE!

we think you look so awesome in your class of big dogs. what a good boy! we can't wait to see the movie--we will be thinking of you!

We can't believe it! Is that your brother??? Butt don't worry, we wont tell anybuddy about this and we will clear this matter up for you in our next Dear Star, column.

When did you grow wings? Oooops, sorry!

Hi Brutus! It's Mayzie again. Just wanted you to know you have an awardie to pick up over at bloggie. You might already have it but it's still very well deserved!

And I've seen pictures of the wee Brute flyin too! Must be some dragon genes in there somewhere...but the tail fell off by the time it got to him!

Yep, I can see you and the dragon have lots in common. I just hope you're not toothless too anytime soon!

I could not sit still for five minutes unless my mom was holding me.

We're really impressed with Brutus and staying for SO long.We didn't want our mama to see this one!

We sure hope we are up in N.Idaho when it's our time for Flat Brutus.Daddy's work in Phx has changed some plans on us and we're not going up on the 15th as planned.It'll be later.Not sure when yet. Happy Easter to you!!
Smooches, BabyRD & Hootie
ps-(from Cassie) Thanks for the review on HTTYDragon. We'll go see it now!

HTTY Dragon was on mom's list to go see now she's moving it to the top. Of course that means leave me at home. :-( 5 min down/stay? That's just crazy talk!

That is so great that Brutus doesn't mind hanging out with the big dogs! He is obviously very well socialized all because of his momma! Love to see that!

You had us giggling but we totally see it! I've seen FB on some of the blogs. He has been a busy guy!
I have a yummy gift for you on my blog, please stop by and pick it up!
Snuggles,
Twix

Brutus don't get offended, but momma keeps laughing at this post and the pictures of you sitting with those big students.
Benny & Lily

We have a black frenchie called Dex, and felt exactly the same about Toothless, he is a French Bulldog, that flies and spits fire...