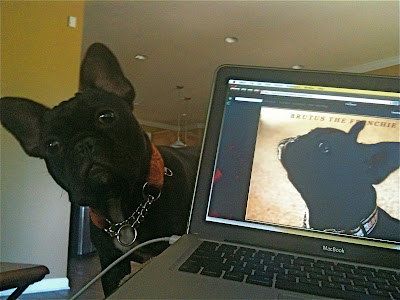 I have to admit, it snuck up on me a little! Opened the Blogger "dashboard" to do something else, and realized I was on post #197. Holy cow!! How time has flown! Seems like just last week that we were doing post #100... This post is long enough, so I'm sorry to say that you'll have to wait until tomorrow to hear about the fun little project we're launching in celebration of reaching this milestone. But for today I hope you'll entertain a little retrospective on how far Brutus' blog has come in such a short time.
Our first post was May 30, 2009. I did it on a whim; my step-sister blogs about her daughter, and she jokingly told me I should do one about Brutus. Far be it from me to back down from a challenge!! I logged onto blogger and made an account, and before I knew it, the blog was up & running. It all began with a simple post about Brutus getting his CGC title. Only my family knew about it, and their verbal comments were really all I ever expected. Never planned on it being any more than a conversation topic at dinner. 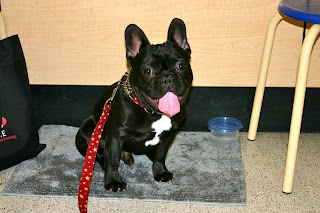 A proud (and tired) Brutus after being awarded our very first AKC title.
But it was sorta fun, and some things happened over the next few days that seemed like it might be fun to share. Brutus managed to eat his way out of a soft-sided crate, which was pretty amusing. That post generated my first comments on Blogger, which were actually only a conversation between me & my blogging step-sister! 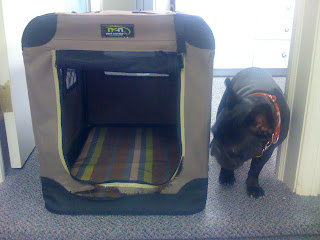 Did I do that???
I put up several more posts in the next week, but had no comments. However I was hooked, and figured the blog could be a scrapbook of Brutus' life if nothing else. Then lo & behold, after another few posts, we had our first "real" comment. It was our pal Bijou who was the first to officially welcome us to DWB. 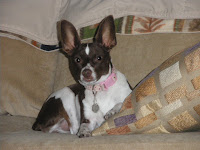 Bijou - the first of MANY friends!!
I had never heard of such a thing - who blogs for their dog? Little did I know!! Soon to follow were Sedona (who sadly doesn't get to blog much these days), the Rocky Creek gang, and Martine - all of whom are still our good friends today! Actually I have to give Martine credit for helping to popularize our blog, by choosing us as winners in her "Sugar-ific" photo contest. Our winning entry is one of my all-time favorite shots of Brutus: 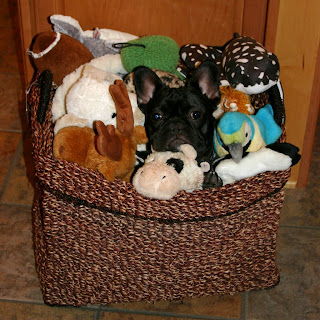 Can you find the Frenchie??
From there we met Mango and Khyra, and the flood gates let loose. By post #100 we sponsoring our own contest (That's Ridiculous), which had over 30 entires, and was won by the fashionable Lorenza & her mom. We've had many successes to share, both at home and in the show ring- and probably taught our followers more than they ever wanted to know about dog agility! 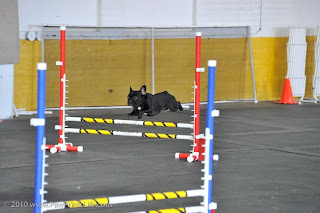 We've taken you along on adventures, thanks in part to Flat Brutus (more about him tomorrow) & also by taking the whole pack along for the ride in our house-on-wheels, Big Earl (a 38-ft motorcoach). 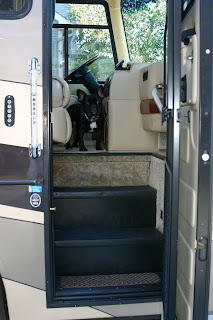 What are you waiting for mom? Let's roll!!
We've also shared some sad times, including the loss of one of our own pack (Duncan, our 17-yr old JR terrier who left us last fall). 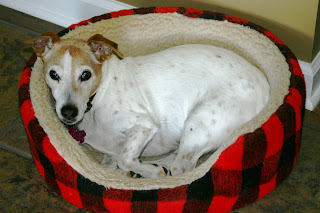 To make what is turning into a long story as short as I can, let's say that we have more friends than I could have ever imagined!! We just passed the 100 mark on followers here on Blogger, and in January I started Brutus a Facebook page - which already has almost 150 fans! We've made friends from coast to coast, in fact all over the world (England, Norway, Canada, Spain & France - just to name a few). Some friends have come and gone (we miss you Sassy Sasha!!), and several have sadly crossed the Rainbow Bridge. We are pals with a ton of puggies, one of who has become Brutus' gilrfriend (Love ya' Stella!). We've even moved beyond the confines of cyberspace, and exchanged cards and presents with several of our friends!! 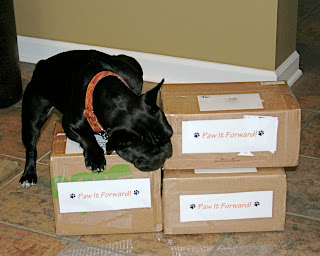 To say blogging has become a hobby is probably an understatement - it's more like an addiction! If I don't get a post up at least 4 times a week, I feel like a slacker!! Brutus has even become sort of a minor celebrity, as I have actually met someone who (before they even asked my name) said "Is that THE Brutus with the blog??" Who'd have thunk it???
That all being said, it wouldn't be the same without the 20-30something of you who comment so often, and truly brighten our days. I hope the comments we leave brighten yours! I hope that someday we actually get to meet some of you in person! A huge THANK YOU to all of you for being a part of our lives, as well as sharing yours with us! I'm so thankful to share my life with Brutus, as well as with all of you - and it wouldn't be the same without each and every one of you (and there are way too many of you to name)!! 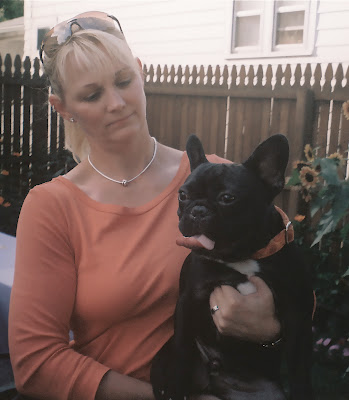 So tune in tomorrow to hear about the little project we are doing to celebrate our 200th post. I It's going to be fun, and anyone who wants to can play along. I'll give you a little hint to keep you coming back - it involves Flat Brutus!
Posted by BRUTUS at 7:44 AM

CONGRATS on this milestone!! We were the same as you - never thought that blogging would become a way of life.

We can hardly wait - and if it involves mailing Flat Brutus out to visit furiends - we want to be first!!

Congrats on making it to 200! Yes you do brighten our day. When I first started following blogs I mostly looked for labs and such since I am a lab person but have come to find that has nothing to do with the blogs I enjoy most. I don't think I have known a Frenchie in real life but you and Benny & Lilly have been awesome ambassadors!
Great post, I hope more people do these 'retrospectives' it is cool to hear about them.
p.s. that is a great contest winning photo of you in the basket! I do believe you are stuffed in nest to a Moose, no?

I love keeping up with your adventures and I can't wait to see where the NEXT 200 posts take ya! Wheeee!!!!!!

Congrats on reaching 200! We had planned to do something for our 500d post, but then we suddenly passed it so we know your feeling. At least you actually managed to remember the big number. BOL!

Congrats on reaching 200 posts and here's to your next 200th!

Oh my goodnesses! Happy 200th! Since I just started blogging, I can't even imagine reaching such a humongousoid number. But then, after reading many of your posts about Mr. Brutus, I can see that he keeps you stocked with lots of material to write about. And I agree about it being addicting. Writing about my adventures and checking up on all my new friends is one of the best parts of my day.

What an appropriate and wonderful 200th post. It warmed me up to hear about your humble beginnings too :) As for the first contes... Sugar-ific, precious shot. Congratulations and thank you for being such a great blogbuddies. Yes, your thoughtful and funny comments do brighten our day.
Twinkie and family!

Congratulations on 200 posts, Brutus! We're so glad you started blogging. We LOVE your blog!
BTW Carol Usher will do any breed of dog you want her to do! She is THAT talented!

I can't wait to see what you have planned for tomorrow!!

Oh we are sooo happy for you! Your 200th post? Wow, way to go buddy! We can't wait to see what's in store for us on tomorrow's blog. But we know it will be fun!

See ya then,
Riley and Star.

Congratulations on your 200th post! I just discovered your blog a few weeks ago and it has become one of my favorites - along with Mango and Dexters', and Frankie's and Mayzie's and Tucker's and well, the list goes on. This blogging thing really is addicting, and making new friends is the best part.

That is khwite a pawesome achievement!

It was also a furry interesting post to see how woo got here from there!

Here's to many many more!

I remember the day I found your blog listed on DWB. Has it really been less than a year! Seems like we've been furiends furever ya know? You've shared some terrific adventures with us during that time and we can't wait to find out more about your project.

I love to read about Brutus and his escapades! He always brings sunshine with him. He's is jolly, happy and fun to watch.

Congrats on #200 - we loved reading the history of your blog and only wish we had known you earlier.

Wow, 200 posts! That's a lot of blogging in a short time, but we wouldn't expect anything else -- we must have our Brutus updates!! Nice going, Team Brutus!! (and a wave out to Mason)

Congratulations on two hundred posts! That's a great milestone! As we read your post, we found ourselves agreeing with a lot of the things you said, especially about getting entries up for the week!

Bunny and her mom

It does kind of sneak up on you, doesn't it? But I am so glad you are a blogger for sure.

I can't believe it! Almost 200th Post!
Sure time flies!
I am very happy to be your friend and I love to come and read your posts everytime!
Kisses and hugs
Lorenza

We are happy to share in the life of such a cute Frenchie. We cant wait to hear what flat brutus has in store for us!

Congratulations my sweetie Brutus! Oh my, I got so excited to see that picture of you in your motor coach. I can't wait until you come out this way and I can see you!

CONGRATS And Happy 200th posts.
Time flies when you are having fun huh?? We all have enjoyed getting to know you and following you. You are so cool and funny Brutus and handsome as all get out!!

Almost 200 posts in a year! That's so great. I bet you never thought that it was actually quite normal to blog about your dog way back when you started - I sure didn't!

Congrats on passing 200! I just passed 200, but it took me 5 years :) Brutus has been very busy this past year. His antics do brighten our day.