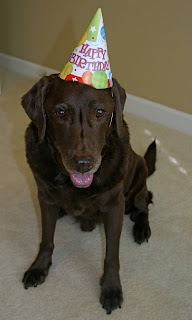 Today is all about Mason! It's his 12th birthday, and Brutus has begrudgingly gladly offered to let Mason have the post to himself in honor of his big day!

Mason came into Paul's life in 1998 shortly before I did - he was already 9 months old when I met him.  Paul had recently gotten his own place and it just seemed too empty without man's best friend.  So he looked in the classified ads, finding a nearby breeder that still had one pup left from a recent litter.  As Paul tells the story, Mason was sitting on the porch when he got to the breeder's.  He took one look at Paul and basically jumped right into his arms as if to say "THERE you are dad!  Been wondering when you'd come!"  Done deal, Mason had a dad and Paul had is dog.  In case you are wondering how Paul named our boy, it was actually his brother Scott that came up with the name - he'd always wanted to name a dog Mason - so Mason it was! 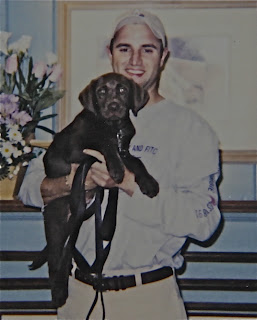 Mason wasn't always the laid back kinda guy he is now.  Like most labradors, he was a handful though his puppyhood and adolescence.  In one day he managed to shred the contents of an entire room to smithereens: a phonebook, several jackets, and the black sponge insulation that goes around copper piping to the hot water tank.  Thankfully he got that out of his system, and since become (as Paul puts it) "the best dog ever".  Other than being allergic to just about everything on the face of the earth, Mason is about the lowest maintenance dog you could ever ask for.   Mason is small for a male lab (having been the smallest of his litter), in good flesh at a mere 68 lbs.  One of his most distinguishing features is the colic that runs perfectly down the center of his face.  You can see it clearly in this photo, where Mason is just under 2 years old. 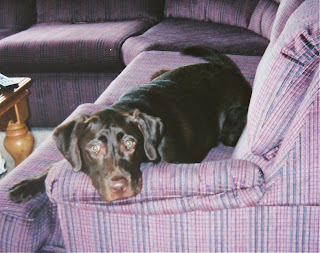 Yes, he sheds abundantly and makes copious noseprints all over my windows.  But he has an iron bladder and is the least fussy eater there is (if he has to be on antibiotics for anything, he'll take a pill right out of your hand like it's candy).  His favorite guilty pleasure (to my chagrin) are Oreo cookies, which Paul slips him any time Brutus isn't looking.  Mason's biggest pet peeve is squirrels, but will never catch one due to his inability to mount a sneak attack (he starts bellowing before he even gets out the door). 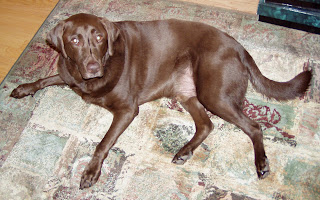 He's a handsome young adult in the photo above, taken in 2002.  Mason has been through several relocations, from Paul's condo, to our first home together, then a year's stint at my in-laws while the house we live in now was being built.  People are always offering to watch him if we travel, yet he's happy as a clam at a kennel (we call it the "spa").
Our chocolate lab is a "daddy's boy" through and through, sleeping basically on top of Paul each night (good thing he's on the small side...).  Mason loves his stuffies, and always took great care of them as his "babies".   We always bring him a toy home when we travel.  Here he is napping with Paul shortly after we returned from a trip to Disney, happily clutching his new Tigger. 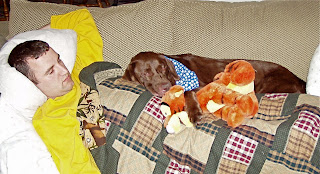 Mason gracefully accepted two dogs into his kingdom - first and angry old terrier Duncan, then the crazy Frenchie puppy Brutus.  He's been a great big brother to Brutus, showing him the ropes, and teaching Brutus what it means to go outside and do your business quickly.  He will happily engage Brutus in a good game of bitey-face and stometimes even a wrestling match.  We see that he's secretly the top banana around here, but Mason just lets Brutus win because it really doesn't matter to him!  He's just a really, really good sport!!  Hope Mason has it in him to be a big brother just one more time.... 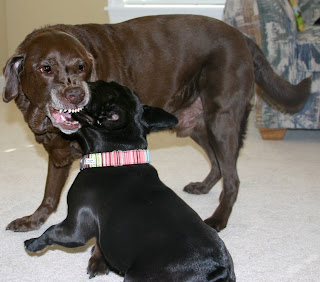 Looking back at these photos makes me realize how much the old boy has aged.  So much grey in his muzzle now, and his coat has become curlier & coarser.  He's still healthy as a horse, save some arthritis and a bunch of fatty tumors (all typical lab-ish troubles).  Mason still loves to chase tennis balls, but tires out pretty quickly.  Nothing a good nap can't cure!! 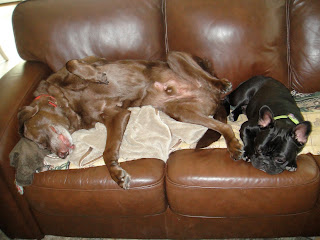 So today we celebrate 12 wonderful years with our Mason.  Here's some obligatory party hat photos for your amusement! 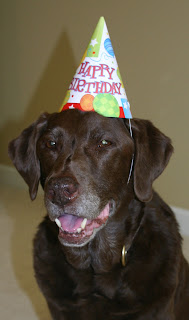 The birthday boy smiling for the camera.. 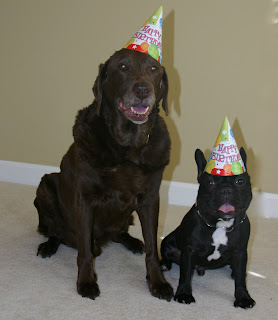 ... and being a good sport letting Brutus in on the fun too. 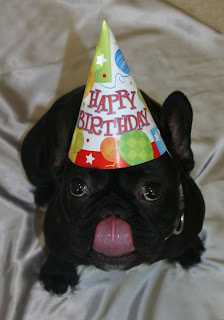 Did someone say there'd be cake??? 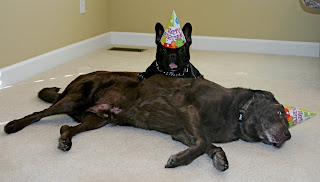 Hey mom, Mason's out cold, can I have his piece of cake?? 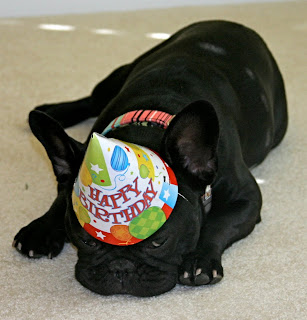 I thought you said there'd be cake.  I'm not letting Mason hog the camera for nothing... 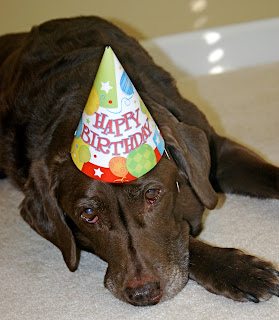 Gosh, this posing stuff is tiring!  How does Brutus do it?
See, I told you Mason was a good sport!  Now he has the rest of the day to lay in a sunspot and soak it all in.  For putting up with me (& Brutus), think I'll go buy him a little special something now, and find him a special treat for his dinner!
Happy Birthday, Mason!
We love you buddy!!
Posted by BRUTUS at 11:36 AM

Happy Birfday, Mason!!! Nice to see you got to take over the blog for a day (well, sorta, with the obligatory Frenchie poking his nose in! hehe!)

Awww...happy birthday, Mason! It was SO much fun reading all abouts you and how you came to lives with your Most Perfect Family That Ever Was. You are a really, really, really good boy!

Oh, and what's this about another little brudder?

Happy, happy 12th birthday, Mason!!!
Now I feel really bad...I didn't even know that Brutus had such a wonderful brother!!! Where have you been, Mason?
I really thought that those 'Flat Bruti' were due to some loneliness issue. Seems I was gravely mistaken and I do apologise.
Lotsaluv and lotsalicks
MAXDOG IN SOUTH AFRICA

Happy Birthday, Mason!
I hope you have a pawesome time celebrating your big day!
A special something and a special treat sounds great to me!
Thanks for sharing your story!
Kisses and hugss
Lorenza

Happy Birthday Mason! There are perks to growing up - now mason can get in the moview $3 cheaper than everyone else!!

So that bit about being a big brother...
Does that mean there is a new puppy on the way?

HAPPY BIRTHDAY MASON!!! I have a cussin named Jake who is also a Lab. He has so many things that he is allergic to that we say he is allergic to LIFE!!
You can make as many snot smears on the windows as you like today bud!!! Hope you enjoy the cake!!!

Thank you for taking us down memory lane.

We love the birthday hats... wish they made ity bity ones for the kiddlets!

Awww! Happiest of Birthdays, Mason, and many happy returns!

Happy birthday, Mason! Everyone looks adorable in their party hats!

Happy birthday Mason! I'm sure Brutus thinks your the bestest big brother ever.

Gee, Mason, you sound very much like my Linguini. Sweet, easy going, you even take the meds with the ease she does. A twelfth birthday is significant. Happy happy birthday and many more!
Twinkie

and wishing you all a happy happy easter!

I hope woo get some kharrotkhake!

I grew up next door to a chocolate lab such as yourself. And now my sweetie Brutus has one for a brother!

I hope you have a very wonderful day!

Happy Birthday Mason! I love your colic on your nose. It looks kinda like the one down my back! You are such a good sport for all the pictures.

Happy Birfday to the Mason!!! I'm closin my eyes and wishin for him... a healfy treat what taste just like OREO CAKE!

Brutus, you and the Mason are fine lookin fellows and your home sound like it full o love and fun!

I can't wait to read more!

wif love from the Luke

(Brigitte has a particular fondness for chocolate labs such as yourself. She is in love with the Girl next door Meekus)

Happy Birthday, Mason! It's so nice to see your handsome face in one blog entry! What a lovely story about your first days with your forever dad!

Happy 12th birthday, Mason! You are such a handsome boy!

Happy Birthday Mason! We enjoyed reading about you and seeing your handsome photos!

Happy Birthday Mason - one day late. After looking at all of these wonderful pictures, we want to know if we can claim you as our brother too?? We miss our Java Bean.

Happy Birthday Mason, what a wonderful friend you've been to your family. We are so glad you had a special day :)

Happy Birthday Big guy! Yes 68lb is on the smaller side of standard (65-80lb I think?) but it is totally respectable and you are a strikingly handsome fellow! And of course as long as Brutus is there you are the 'big guy! I had never noticed your cowlick on your face. All labbies are unique though and I love that you all have your own special mark (aside from your personality!) that sets you apart!
I loved hearing your story and think it was awesome that Brutus shared with you.
I do hope you got some cake or at least an oreo or two!

We are way behind on blogs, but we do want to wish Buddy a very happy belated birthday.

Happy Birthday Mason! Thanks for sharing more about yourself. Yuh, I guess labradorks can be kind of the happiest, easiest of dogs. Momma is always saying that PeeWee is easy. Humph.

I liked your bitey face on Brutus shot. Good to see that he isn't the king all the time.

You deserve a great big treat for being such a good dog. Hope you got lots of hugs too.

Yep, my big sis Becca was here buhfore mom an' wuz 8 mos. old when mom first met 'er, so my mom has somethin' in common with yer mom! Buhsides the fact that they're both in the tooth business.

OH we love Mason! It makes my mom person misty-eyed remembering their old black lab Buddy who crossed the rainbow bridge a couple of years ago.

I hope Mason had the bestest birthday ever!

Hey we just realized that you hoped Mason wouldn't mind being a big brother one more time...is there an announcement of some kind coming up??