Hello from the open road!  Coming to you from Big Earl thanks to the miracle of mobile internet! 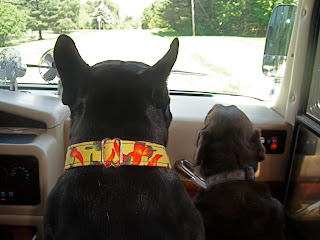 Thanks to everyone who pointed out that my Wordless Wednesday post appeared on Tuesday.  I can offer three explanations, so take your pick:  a) I'm blonde, b) I lost track of the days being on vacation, c) I scheduled the post in advance (anticipating poor wireless internet connections) & put in the wrong date, or d) all of the above.
Anyhoo....
We are well underway, traveling west across I-80.  As we left Ohio, we passed the exit to the town where Brutus was born, just about 2 years ago. 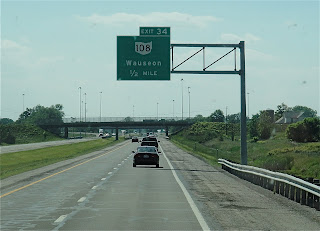 With Big Earl fully stocked and loaded, we really only need to stop every 600 miles or so to refuel.  That would have gotten us across several states, so we made it across Ohio and Indiana without a pause.  However, the boys need an occasional potty break, plus we couldn't help a quick stop in Chicago for one of our very favorite foods on the planet: Giordano's stuffed pizza!! 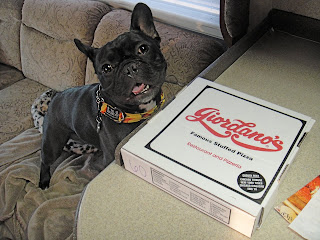 Look at all that cheesy goodness!  Sorry, Brute - not for Frenchies!  The resulting gas due to the cheese in the confined interior of Big Earl would be unbearable! 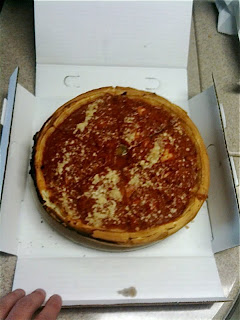 After that tasty little treat (and we did feed the dogs BTW), we had the energy to make it the rest of the way through Illinois.  By the time we got to the Iowa line we were all getting road weary, so we packed it in for the night at this less-than-glamorous location near Davenport.  Brutus is in the photo, biggify and look close! 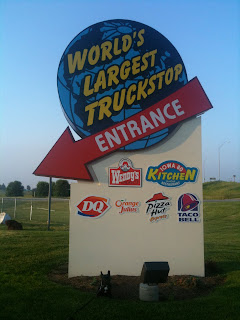 It was quite late when we pulled in and it was a weird night - we had to squeeze into a spot so small that Big Earl couldn't even put out his slides, and listen to semis going in & out all night!  The photo above was taken just after sunrise the next morning, just before we hit the road with a nice early start to the day.
Next stop, Altoona, IA.  After having to spend the night without hookups, we needed a drink & drain for Big Earl.  Did you know that some of the Bass Pro Shops (and most Cabella's) have RV facilities?  No more excuse than that needed to stop at one of Paul's favorite places!! 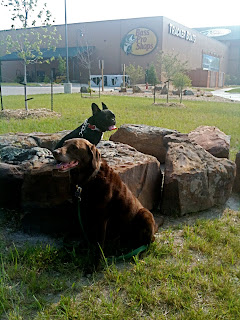 The boys were happy to stretch their legs, and humored me by posing (in the 85F heat) for a quick photo op.  Gotta get them out in every state, Mason in particular has a special goal he is shooting for (more on that in upcoming posts).  So after a brief break, we all piled back into Big Earl for the long haul across Nebraska. 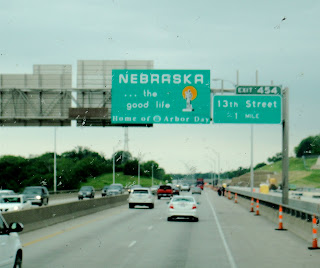 We made it most of the way across the state before we decided to call it an early night.  The weather was beautiful, and we found much more comfortable resting ground for Big Earl at an RV park in North Platte, NE. 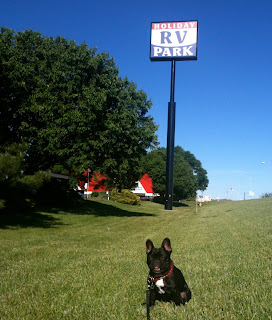 Brutus and Mason we eager to check the peemail there.... 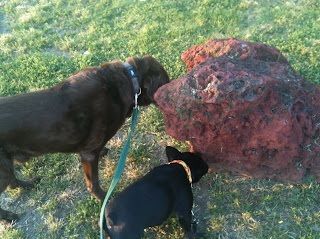 ... as well as leave word that they approved of the location! 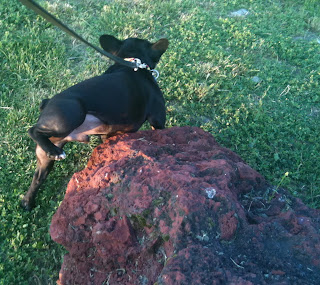 We ended our 2nd day on the road with a nice cookout, then went for a stroll to get some much-needed exercise.  We found this cute place nearby and just had to get a photo for our pal Frankie (one of his gals is named Penny, we wondered if she might be the hostess here). 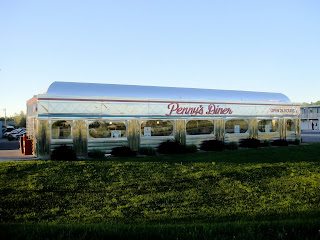 Time to turn in for the night.  It's a l-o-n-g way still to go to our first destination, near Salt Lake City, UT.  We're hoping to make it there in one more long haul tomorrow, but it will be another tiring day on the road.  Please pardon our lack of commenting on your blogs, as internet access is touch-and-go at best.  We're trying to visit a few of you each day & leave comments if the signal is strong enough to do so.  Hope you'll enjoy being along on our Earlventure enough to stay with us!  Tune in soon for the next installment!
Posted by BRUTUS at 12:01 AM

What a fantastic trip so far!!!! Glad you stopped in Chicago for some Giordano's! Good stuff, isn't it? I once carted a frozen Giordano's pizza to Ohio! Have a safe and fun trip and I look forward to your updates!!!

Wow, you have sure made good time! The photos of Brutus just crack me up. He has such a cute little squishy face. Awaiting his flat twin's arrival here in N.Idaho.;<) It's been thundering and raining here...hope you are having better weather than us!!
x-cassie (BabyRD & Hootie's mom)

Looks like you're having a wonderful trip!!
I'm looking forward to your update :D

Have a safe trip!

I approve of your trip since it seems to involve tons of really good foodables and pee spots. Just think of all those doggies getting a whiff of the famous Brutus and his side kick Mason.

what did you read in the peemail?

Adventures on the open road! Looks like you're having a great trip!

We are enjoying your road trip Brutus and can't wait to hear about what Mason is up to!

What a fun start to your trip.

We'd have waved at you when you drove through Illinois if we'd known! Your trip looks great so far. What exactly was that arrow pointing to on you, Brute?

Hey Brutus and Mason... THANK YOU soooo much for taking the pic of Penny's Diner. I made a copy and will post it some day.. Maybe on her birthday. That was very much thoughtful.
Hey fellas are you getting any good jokes at the road side rest places. They have the bestest, butt I'm thinkin' that the Bass Pro place would have some super ones too. write em down and post em for us... K???
Grrreat adventure so far. Sorry about the lack of pizza though.

OMG, that Chicago pizza looks so yummy! We would have promised to hold our wind, no matter what, Brutus! Ya gotta have pizza!

Oh, Mom says that diner probably had great foodies. You are really moving across the country. Too bad you didn't head south from Iowa to the KC area. Safe travels the rest of the way and have lots of fun.

That is all we need..One more reason to go to Bass Pro shop for the Daddy. Geethse.
Anyhoo, that pizza looks pretty darn good. Never had that kind, but while in NYC we had some UNO'S that was really tasty. Yum. Now I am thinking about it.
Sighs (Kitty), and Snorts (Coco)

Oooh. That pizza looks good! Hey, since you're coming through Salt Lake (and Park City isn't THAT far from Salt Lake City), could you bring us some of that pizza, pretty please?!? Have fun in Big Earl!!!

What a super-fun adventure! We'll be looking for Big Earl out our window!

Awesome Brutus...you guys are going to have such a great time with Big Earl. Could we make a flatty Earl? I would like to go somewhere. Have fun and continue leaving pee pee all over the country
Benny & Lily

I am sure you all are enjoying your trip!
Yummy pizza!
I will be waiting for the next part of your Earlventure!
Kisses and hugs
Lorenza

Loved the post! Too bad you did not need to stop in Chicago - we'd love to have you. Well, Brutus, and Mason Anyway, The humans can fend for themselves. But we think Big Earl might just be too long for the driveway?
Our humans love Giordano's too!

holy cow, that pizza looked super delicious!!! ya'll are having some awesome adventures in big earl for sures. how are brutus and mason at driving? teehee.
*woof*
the booker man

Hmm gas in a confined space, my humans know about that with the two of us. thanks for sharing your trip with us!

What do you mean you didn't get any pizza? Pizza bones are the best.