Hey there!  It's your favorite traveling Frenchie, Brutus.  Mom & Dad are so busy exlporing Yellowstone NP that I felt obligated to pick up the slack and blog about what we've seen already here. 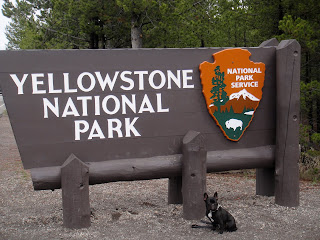 We've seen and gotten to photograph many of the area's wildlife at surprisingly close range!  Here's a bison sticking out his tongue at us! 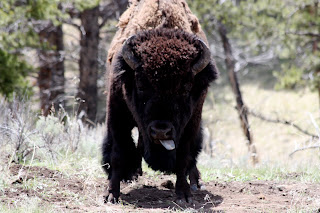 And these are baby bison!  Aren't they cute??  Don't know the correct term for them (bisonlettes? bisonlings? beats me...), but unfortunately they'll grow up to be the same beasts as their parents.  Pretty adorable for now, though! 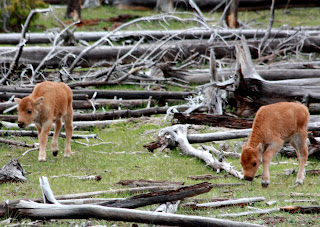 We had a special treat of catching a glimpse of a bald eagle sitting in the nest - we also saw one fledgling, just getting ready to leave the nest. 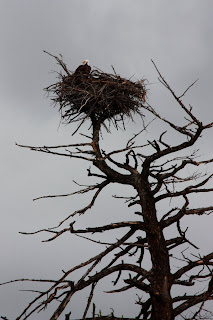 There were lots of elk, 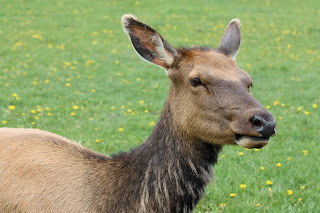 And we watched the (mule) deer and the antelope play.  Hey that sounds catchy - bet they'd make good words to a song... 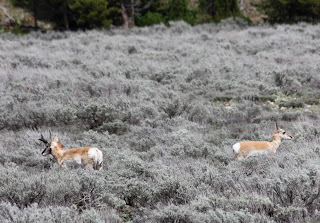 Anyways, mom got many of these images from a great vantage point - Big Earl's family room window.  This worked well for several reasons, partly because his height gave her an advantage over all the cars & people also trying to get the same shot.  It also happened to be raining pretty much constantly, so it was nice to experience nature without getting it all over us! 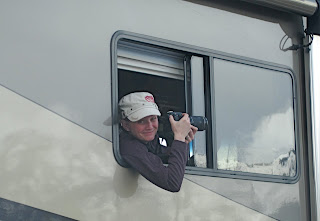 Which brings me to a beef I have with the National Parks.  This pesky sign is everywhere!  What's up with that????  Dogs are only allowed in parking lots, on streets or in 100 feet thereof. 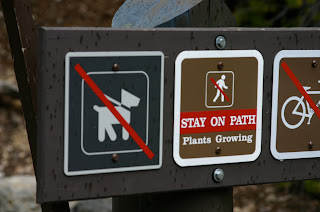 So the majority of my experience had to be gained through the window! 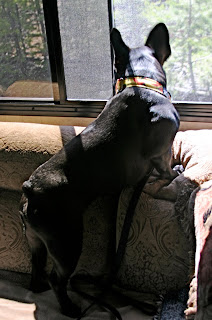 I love my vantage point on the couch and all, but how about letting a guy experience nature?? 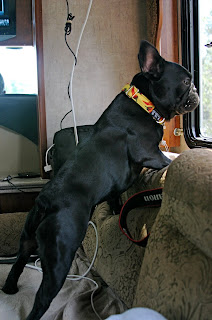 And that stupid sign also dictated that this is the closest I could get to Old Faithful (the hump under the steam in the background).   "No pets in the thermal basins" they say.  Don't these ranger people understand they are depriving a citizen of seeing the great wonders of his country??? 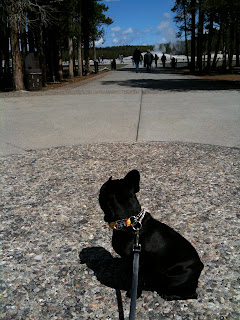 What is that you say - dogs aren't technically citizens?? Hmpf.    So that means the only glimpse of a bison I can get looks like this. 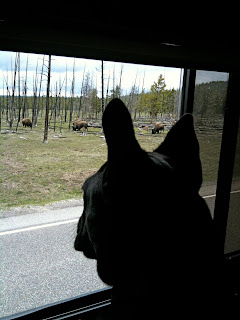 Even sleepy ol' Mason got a little excited about seeing the bison and wanted to get closer.  I'm just guessing, but I think he was under the impression that they were some kind of giant squirrel based on his reaction!  I've heard they make dog food out of these guys, and apparently Mason was hankering foe some! 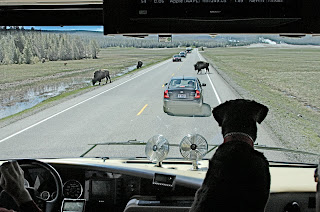 So all my up-close-and-personal nature encounters had to be outside the park boundaries.  Thankfully the town of West Yellowstone was a great place, made lots of friends there! 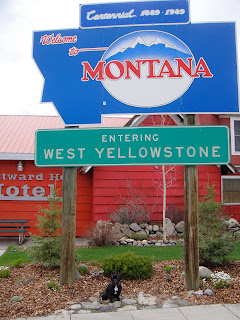 In fact I came to prefer a little tamer kind of "wildlife" as seen in town.  Look at this nice bison I made friends with while on a walk. 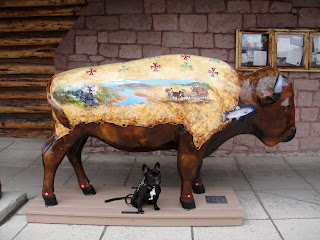 And these moose (mooses??) stood guard just outside our RV park.  We never did see a real moose, so I was pretty impressed by these guys.  Felt kind of a kinship with them.  Must have something to do with their striking ears... 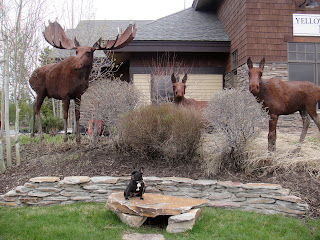 And thankfully this was the only Grizzly that any of us got anywhere near. There was others along for the ride (Grandma...) that were convinced we'd be eaten by bears at some point during our trip (and that would put a damper on things), and apparently she started to rub off on me!  I had to keep checking over my shoulder that no real bears came to investigate (mom had left the Bear-B-Gone back in the coach)! 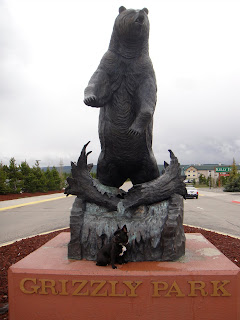 So that about covers it for now.  There's plenty of spare time for me & Mason here, as we have to stay in Big Earl every time all the humans go off exploring.  Guess I shouldn't complain; this is leagues better than the "spa" Mason & I got imprisoned in pampered by last summer when they went to Sequoia and Death Valley National Parks.
Maybe I just need to pull my best "adorable me" face for a few rangers and I can get some more privileges in the park??  Like this: 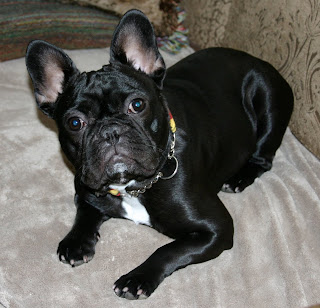 Singing off for now, this is Brutus the Traveling Frenchie signing off from the wild West!  There's lots more to come, so stay tuned for more from Yellowstone and the rest of our Earlventure!
Posted by BRUTUS at 11:16 PM

Looks like you are having an amazing time Brutus!!!! Love the photos! Sorry you couldn't get closer to the sights!!!

Lola and her mama!

That last pic of Brutus is just too darn cute! I want to give him kisses on those smushy portabella mushroom cheeks! Looks like you're all having fun!

Hey Brutus, if you come visit us, you'll probably see some moose. Our neighborhood moose hasn't been around for a couple of days, but if you stick around long enough, I'm sure she (or some of her relatives) will come back. However, I'm rather glad to hear that the only grizzlies you have run into have been of the large bronzed variety!

And I'm totally with you - what IS up with not allowing dogs in National Parks? When we spent all the time right next to Zion N.P. last fall and this spring, we could go on one measly trail in the park (and it was maybe 2 miles, round trip). We spent a lot of time in the surrounding BLM land, were no one cares about doggies! However, I'm all for trying the cute look on Park Rangers. Maybe if a bunch of us do it, they'll relent. Maybe...

And sorry to hear about the rain. But I think you guys have taken it with you; we've got nice weather now! :-)

*kissey face*
-Fiona and Abby the Mutant Puppy (and Family)

Good grief! How can they not allow animals out in nature? That's about the silliest thing I've ever heard!

hi brutus! wow, your trip sure looks like fun! i am sorry you personally did not get to walk around in yellowstone, it's a really neato place. i hope your parents got to see the mineral and hot springs. the colors of these waters are beautiful. we saw many elk on our trip there, some were very cloe. we even saw one in the little town in yellowstone. it was a big male with a huge set of antlers. he dug them into the ground and nibbled some of the bushes. as we were leaving the little town we saw his harem, lots of females!
have fun!!!
hugs,
puglette
:o)

You look like you're having a blast to us, Brutus - even though you can't get too much closer to the wildlife!

Well now that is just NOT FAIR. You and Mason have Rights (and Lefts) and you should be allowed to go everywhere you want.
Those Ranger Guys need to learn from MY Ranger Guys. They let me go everywhere except for the two legger Beach... and who would want to go there anyway. I have my own beach right next to it and MINE is 3 times BIGGER!!!
You surely are having a grrrreat adventure! Love all the Wildlife pics..

Boy Brutus...you sure are getting discriminated against!! Maybe a lawsuit is in order???

But then again...maybe those rangers don't want to see you eaten by a grizzly.....

Oh, Brutus, I feels your pain. That whole "can't go in the National Parks" thing gets old after awhile, huh? But at least you're getting to see SOME wildlife and that's Most Wonderful!

If your cute look doesn't work on those rangers, maybe you can get by them by just temporarily blinding them with your shiny furs.

PeeS. Today we're showing how we took FB to the Broadmoor.

Woof! Woof! There's a good reason why dogs are not allowed in NP. You're lucky no one visited you. Continue to have a FUN road trip. Lots of Golden Woofs, Sugar

I think that face will work perfectly, who could resist it??

Brutus! Sorry we've been so AWOL - what a magnificent trip you are having. Nat'l Parks sure have dumb rules for doggies. But glad you had such a great vantage point up high where you could see some of that cool nature! Yellowstone is sumpin, huh! Thanks for showing us so much beauty!
Big Hugs xoxoxo
Sammie and Avalon

Yay for road trips! My mom and dad took my flat Basil to Montreal over Memorial Day weekend. I'm kinda glad actually because I got to spend the weekend with my friend Cooper.

What a fantastic trip you all had!!! We love that last shot of Brutus. And BTW, you really didn't miss Ciara growing up too much, that is Thunder in today's post, not Ciara:)