When we last posted the Frenchies and I were getting Big Earl ready to spend a weekend at our first "away show".  I'm happy to report that it was a great experience, and it's taken us until now to fully recover and post about it!  As you can see from the look on Brutus' face below we have lots to smile about! 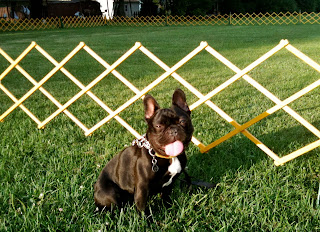 First I'd like to nominate Paul for "husband of the year" award for his support during the weekend.  He drove Big Earl about and hour and a half out to Canfield last Wednesday (no Liz, I didn't suddenly get brave and do it myself, sorry to disappoint!) then came back out to get us again on Saturday. He had to go home in between and work (hey, somebody has to do it, right??), but was always eager to get updates on how we were doing, and check in to make sure we were all safe & sound out there. 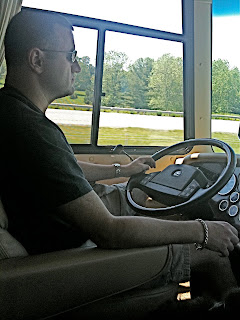 This show is the biggest in our area, attracting exhibitors from all over the country.  The large fairgrounds it is held at literally becomes a city of coaches and campers, hosting over 2,000 entries each day of a 4-day event. 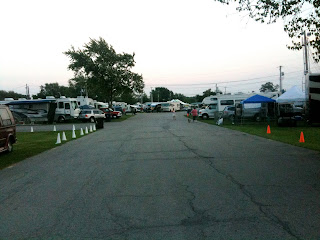 We got to watch some amazing dogs in the conformation ring (some of who we recognized from televised shows such as Westminster), and I'm happy to say that some of the best were owner-handled by our friends! 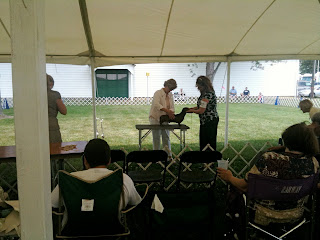 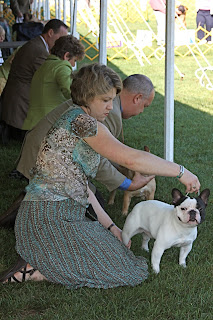 As far as the mighty Team Frenchie, I had Brutus entered in rally for three days.  We'd never shown outside before, so the night before the show we spent some time working around the ring to get used to the area.  Thankfully the weather (which has a reputation for being either dreadfully hot or a monsoon) cooperated and we were able to get our runs in early in the day while it was very comfortable. 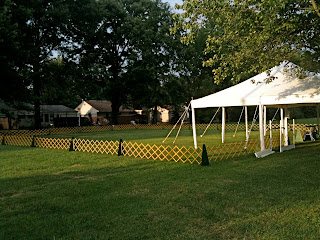 When all was said and done Brutus and I had two nice exercises to add to our list of Q's.  The first earned us a 96, which won the class as well as our RA (Rally Advanced) title.  The second was nice as well, but due to some handler errors (my brain fell out at a few of the stations) not as pretty of a score - but still it was good enough to win the "A" division of Excellent and our first RE (Rally Excellent) leg. 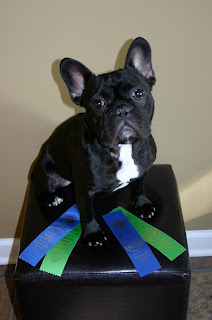 Our third day was not something to brag about, as Brutus told me definitively that two days of Rally in a row was more than enough.  He warmed up nicely but as soon as we got in the ring and the steward took my leash, it was over.  Not feeling it, period.  Only completed a few stations then I thanked the judge excused us from the exercise - but not without some entertaining moments for the spectators first.  As I've always said, if nothing else we'll always make people smile, and I have no doubt we managed to do that! 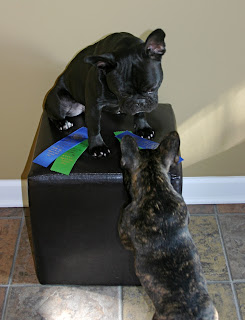 Hey, Carmen!  No slobbering on my ribbons - I worked hard for those!!
Oh well, can't win 'em all, right?  Guess I've learned my lesson to only enter 2 days in the future and quit while we're ahead - gotta play by the dog's rules sometimes when your teammate is a bulldog.  Overall I'm still VERY happy with how Brutus showed over the weekend, especially considering he wouldn't even sit on grass (too scratchy, mom...) at the beginning of the summer, let alone complete a complicated Excellent course on it!  He was one tired bulldog and deserves a nice long rest! 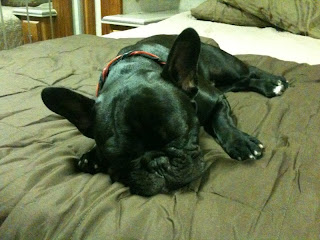 So before I make you all as tired as Brutus from reading a long post, think I better wrap it up.  Tune in again to see how we still managed to end our weekend on a high note.  I'll tempt you by saying that Carmen came through and saved the day, making me and a lot of other people smile.  For now I better let the Frenchies get back to their naps, they've earned them! 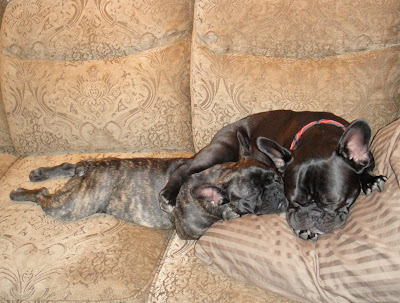 Congratulations on all da ribbons, Brutus!

That is most impressive! All your hard work (and your moms) paid off!

You sure did work hard for those ribbons, Brutus! And you done good! I have to agree with you though, buddy, that two days are enough! I love the last picture, btw, with Brutus's back leg draped over Carmen - so cute!

Way to go!! Those ribbons are pretty impressive :)

Congrats on the purdy ribbons. I bet you are tuckered out still after all that hard work and excitement. Sounds like it was all alot of fun too.

Oh Brutus we are so proud of you. We could just imagine what you did to make the crowd laugh. LOVE the last picture. Hysterical. Maybe you should hire Paw as your permenant limo driver. Can't wait to hear what Carmen is up to.
Snuggles
Benny & Lily

Happy you had a great trip and won some ribbons for Carmen to drool over :)

We sure did miss you. Congratulations on your wunderful ribbons too!

And a goooood time was had by ALL.

From the looks of that nap at the end, it was a great time for everybody!

Congrats! That is great news!!

Those two look sooo cute laying on top of one another!

Congrats! That is great news!!

Those two look sooo cute laying on top of one another!

First, to Brutus' Mom: my Mom thanks you for not making her feel totally inadequate! (And Dad said something about Mom not driving the House With Wheels anywhere but on airport tarmacs where we race cars...) Whatever! Brutus - DUDE!!!! You are AWESOME!!!! (And we already know about your upstart little sister's accomplishments, too. You both are making the rest of us look bad!) Seriously, congratulations to you (and Carmen) and your Mom (and your Dad for doing the driving!) - EXCELLENT work!!!!

what a great job at rally! those big shows are fun but exhausting. i have been looking into rally out here in washington, i think i am going to watch a trial this friday. and i totally understand about brutus' decision to only work two days. charlie gets like that too and will just go out and sit and stare at us when she is done. they sure know how to communicate!
hugs,
puglette
:o)

We never knew you were a show dog! La-ti-dah!
So your Flatty brutha has arrived and weve been having a, well, interesting week...more to blog a bit later, I promise ill send him on clean though...love Major!

Oh Brutus, you did so well, and look at all those ribbons, wow! We can't believe you lasted as long as you did, we're impressed.

We're loving that last photo, looks like Carmen can double as an ottoman... BOL !!!

Rest up little buddy, just because you're back home doesn't mean you can slack off now, that sistah of yours will keep you on your toes.

WOW! Great job Brutus! You and your Mom really know how to bring in the ribbons!
xxoo
Deborah

Ohmidogness! That last picture of the two of you is just TOO precious!

Congratulations, Brutus! I'm real proud of you and your mom. And sometimes it's real impawtant to remind our humans that sometimes it's okay to sit on the bench for awhile. I have to remind my mom of that ALOT!


Don't forget, we moved to http://dogisgodinreverse.com/