As they say, all good things must come to an end.  The car is long since unpacked, suitcases put away, laundry done.  We brought back many memories from our first National Specialty, but of course we couldn't leave there without some other "souvenirs" to help keep commemorate our time in Oconomowoc.  After all, there were fabulous shopping opportunities, and Frenchie stuff is hard to find!  Plus we wanted to do our part to support the artists and vendors who had booths there.  I'm great at justifying things, can you tell???
First, we had to get the obligatory win photos. I mean that poor photographer was just standing there, nice set all ready.  He needed something to do, and we had all these ribbons.... 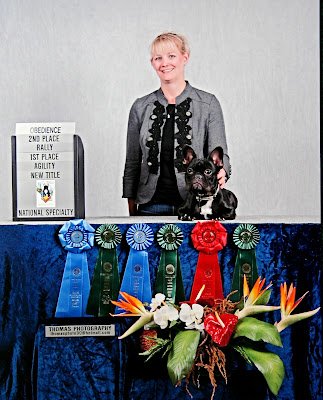 I thought it would be nice to have Brutus & Carmen together in the same photo  - not to mention that would have saved me $40 - but Brutus had other things in mind.  He had the crazy idea that the camera needed attacking, so we had to go through all kinds of antics to get the picture above (they had to hide the camera until the very second the picture was taken).  Carmen, on the other hand was perfectly happy to strike a pose! 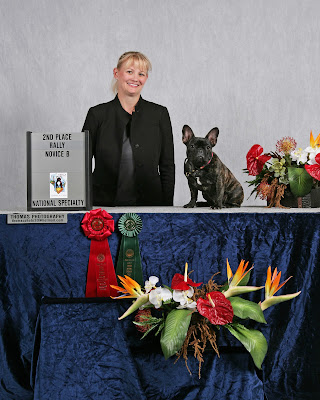 Of course I did some shopping ringside too.  So many fun things to buy, but I was trying (somewhat unsuccessfully) to stay on a budget.   I'd always admired a friend's clay Frenchie sculpture, and couldn't pass up the chance to bring home one of my own:

I think he's kind of a fun interpretation of brindle (dotted instead of striped), but Brutus is still on the fence about whether or not he likes my choice.
We got to meet Michele Copen, and Flat Brutus insisted we have her sign a copy of each of her Frenchie-photography collections for us to bring home.  If you love Frenchies, you HAVE to get her two books, The Heart Thieves (just released) and A Frenchie For All Seasons. 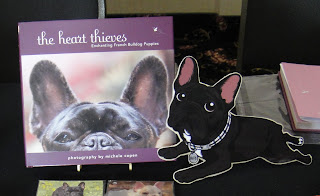 Then this was my splurge - kind of a present to myself for us doing so well in the ring.  I like it because it's kind of subtle, and is something I can wear anytime since you have to really look at it to tell it's a crazy dog person thing.  In fact if you look really close, I'm wearing it in Brutus' win picture above. 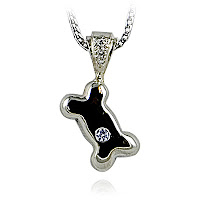 Finally, we were at a silent auction one night and saw this framed Dottie Dracos print.  It was a benefit for the French Bulldog Health Foundation, so everything that was bid went to help research that will help make Frenchies a healthier breed. 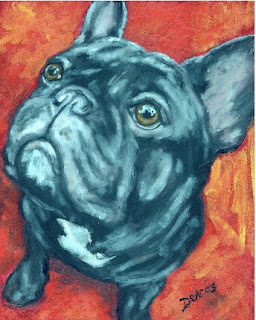 I loved the colors, but what sold me is that it looks SO much like Brutus!
Believe it or not, that's about it.  I got a sweatshirt or two for myself, but really not much of anything for the dogs themselves.  At least they got collar charms with their ribbons from obedience, so they have something of their own to show for all their hard work in the ring! 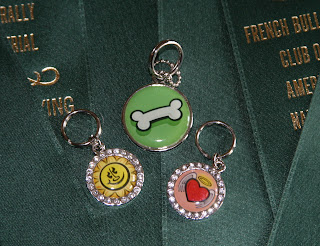 OK, so that's it.  I'm sure you've all had your fill of my ramblings about our trip.  It took us five - count 'em FIVE - posts to share it with you, so in the mean time I've gotten a chance to catch up on some of your blogs as well as capture nice mundane, normal moments from back at home.  No more shows until late next month, so Carmen and Brutus have been happy to be "just dogs" again.  That means lots of napping & snuggling on the couch, as well as a much-awaited return to daily walks now that our weather has finally cooled off.  Thanks again for being here to share it all with us!
Posted by BRUTUS at 10:39 AM

It is hard to find good Siberian mementos too, but Mom is hoping to find some at the Nationals at the end of October. We love that necklace, very tasty. We enjoyed following along with your posts about your experiences. Congrats on doing so wel.

We loved hearing all about your adventures in WI!

We loved hearing about your adventures - Mom is still bowled over - we're so stubborn we'd never be able to do what Brutus does.

Brutus you should be awfully proud of yourself. What a champ. Too bad I 've got to many muscles cause I was trained to be in the ring. Oh well. Mom sure had a fun time too we see. BOL..if you need help building your trophy cabinet let me know. By the way, good job attacking the camera. And Carmen so sweet and patient. Rest, bet there's a lot of snoring going on.
Snuggles
Benny & Lily

What an awesome trip and you guys should be so proud of yourselves!
Your mom brought home some very neat Frenchie mementos!

I bet everyone is happy to be home!

I understand! Greyhound stuff is hard to find, too! I think you got some excellent swag and I'm glad you had such a great trip!

BOY!! You and Carmen really know how to bring home the souvenirs!! What a great job you both did. yah Are you sure that you didnt pose for that picture Brutus and you arent telling us?? That looks xactly like you!! Glad that you are all home safe and sound.

Hey kids check out our blog today, Thursday. We gave you both an award
Benny & Lily

Woof woof woof! I am so glad u went to the nice show and everything. Yipe yipe yipe! :) (wags tail)

gratsers to brutus and miss carmen!! they did super awesome at nationals!!
i really liked all the thingies you bought. the necklace is so pretty...mama says she would love to find somethingie like that to wear! the picture you won at the auction is totally neato, too. you are right, it looks just like brutus! (but brutus is most handsome in person still. heehee.)
enjoy being back at home and just chillin' for a bit! :)

I looked at that first photo very differently after reading about Brutus and the evil camera from hell. That is so funny.

I think all your purchases look wonderful. That painting does look like Brutus! Congratulations again on a fabulous showing.