OK, I finally wrestled the laptop away from Brute's strong little paws.  My turn today!  Once you let that boy start talking, I guess he just can't stop...
As we continue our story from the FBDCA National Specialty, I suspect you are all dying to know how it went for Team Ohio.  We wouldn't have gone all the way up there to just watch after all!   I'll start by saying my frogs did me proud in the ring, and achieved and surpassed the goals I set for our first nationals! 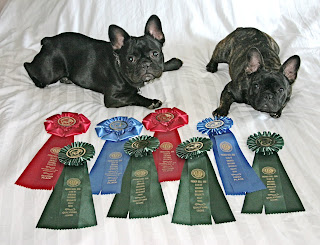 Agility was the very first thing on tap for the week, being outside on Monday afternoon (a very strange time for a trial).  It was a beautiful day albeit it about 10 degrees warmer than I would ideally have liked.  But temps in the 70s, a good breeze and ample shade made it very comfortable for the dogs.  It was a first in two ways - agility had never been held at a Frenchie national before, and we've never trialled agility outside before.  There were many spectators on hand to watch about 20 Frenchies show off their athletic abilities. 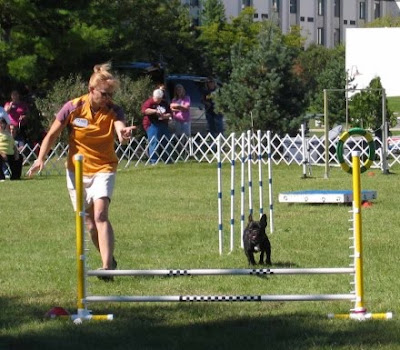 Brutus and I were entered in two events.  Our first (Novice Standard) course went beautifully for 15 obstacles, then a small natural disaster ended our run a little prematurely- a gust of wind blew over a jump, disrupted our concentration and resulted in an NQ.  Bummer.  Thankfully our second run (Open Jumpers) was even better, Brutus running the best he ever had for me!   We had a clean, fast (well, for a Frenchie), qualifying round and which turned out to be the best run of the day.  The judge even commented that Brutus was the nicest-running dog there!  Quite a compliment considering the #2 agility Frenchie in the country was also there (the #1 dog was off getting his MACH2 title, gotta keep our egos in check!). 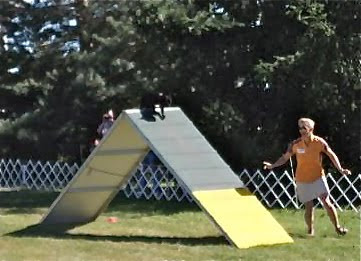 Here are the videos from our two runs.  Note to those of you following the blog via Facebook - these are the same videos I already posted on Brutus' wall, so don't worry that you are missing anything.
For those of you who can't watch video on blogger, these are all on YouTube as well.
Our other time in the ring was on Wednesday, the obedience and rally portion of the specialty.  Brutus and I had another nice Rally Excellent run (scored a 98/100, winning the Excellent A class), only one more qualifying leg to go for our RE title now!  We also braved the obedience ring for the first time, eeking our the first leg of our CD (Companion Dog) in Novice A. 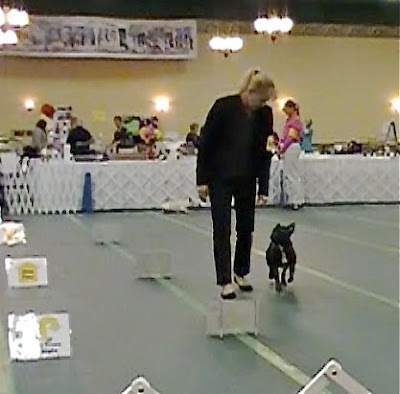 I only have video of rally, too bad since the obedience run was definitely more entertaining!  Brutus did well in most of the exercises (there are 7 parts to the test), but our heel free (off leash heeling) was pretty hilarious and the audience certainly enjoyed it.  I personally found it slightly excruciating, as I glanced back and Brutus was half a ring away from me instead of heeling at my side!  Unlike rally - where there is really no limit to how much you can interact with your dog, short of touching or feeding them - traditional obedience is much stricter.  You must walk with your hands at your side, and can only give one signal (either verbal OR hand) at most.  The dog must sit automatically when you stop, and speed up or slow down to match the handler's pace without any signals.  Brutus becomes unmotivated (to say the least) when I can't cheerlead him, so it was a small miracle when he caught up to me at the end of the heeling pattern!  But hey, we qualified and now only need 2 more legs for our CD title.
Sorry for some camera malfunction, but thankfully I have the more successful (albeit less humorous) rally test to show you here:
Last  - but certainly not least - Carmen got her first chance to strut her stuff in the ring.  At six months and one week old, she had just become eligible to compete (6 months is minimum age for any AKC event) and was MUCH younger than any of our competition. Not to mention that she had to deal with all the distraction of noise and spectators sitting so close to the ring - a tough thing for such a young dog for sure! 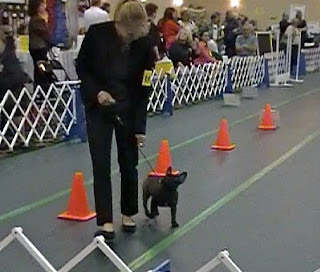 No one told Carmen that apparently, because she blew almost every one of them out of the water!  We scored a 97/100 and came in 2nd in our Novice B class of 9 dogs - could have won if it weren't for 2 points of handler error!  After our run I told the judge how young Carmen was (he apparently thought she was a mini-Frenchie) and he was stunned.  Haha!  Here's the video of her short but sweet exercise.  I can't help but smile at her as she waddles along, looking up at me with those big brown eyes!
With that resoundingly successful debut, Carmen has the first leg of her RN (Rally Novice) title.  So proud of my little princess, who thankfully is NOT living up to her name of Drama Queen!  She took everything the whole week in stride, from the 9 hour car ride and crating in the hotel room to minding her manners in the ring and around all those other dogs!  I think Carmen is looking to catch up and pass Brutus before he knew what hit him!
So that's it for our time in the ring at the specialty.  Even if they hadn't have placed so well, Brutus and Carmen are always #1 in my book!  Thanks for friends Andrea (who videoed our agility runs) and Hope (who was made sure our rally runs were on film), and those who took still photos during our runs.  There are some more good agility action shots floating around out there, will post them if we can get our hands on them!
Lots of other fun things still to tell you about, so I hope you'll stick with us for another few installments from Oconomowoc!  And yes, Mayzie, there will be cheese....
Posted by BRUTUS at 8:56 PM

WOW, I really enjoyed watching you both! Congratulations on all the ribbons! I have never done agility before and it must be very hard and time consuming! BUT I bet it's a lot of fun and rewarding!
Have a nice night!
xxoo
Deborah

Most impressive - especially for doggies with short little leggies! ;-) We are humbled by our complete lack of behavioral skills!

Awesome, just awesome. Congrats to Mom, Brutus, and Carmen - we are so proud of all of you!!!

WOW!! That is really cool!! CONGRATS to Brutus and Carmen, A job well done!!

What an amazing trainer your mom person must be!

Congratulations to all of you...and did you say cheese would be featured?

WOW, they are both so amazing! Brutus amazed me when he climbs those tall obstacles! And Carmen is so sweet watching you!

ya'll are workin' it!! gratsers to brutus and miss carmen!! mama is way impressed with miss carmen's attentions cuz she says i was totally a hooligan and completely uncoordinated at 6 months. hmmmph!
lookin' forward to hearing more...especially if cheese is involved. teehee!

pee s -- i totally dig brutus and miss carmen's bathrobes from a couple posts back! :)))

Great job!! We are excited for you and in awe of you.

So Pawsome!! Congrats to you, Brutus & Carmen :)

I am not surprised that you got so many ribbons, but I am jelly. You are superstars.

Oh man, we are so thrilled that both Brutus and Carmen did so well. Watching the videos, one can't help but smile. They are both so adorable. It's amazing how obedient they both are. Wow.
Smooches,
BabyRD & Hootie
(& Cassie,the human)

You doggies sure had a terrific adventure. I am furry jelly!

wow! i am so impressed by both brutus and carmen. they look wonderful in the ring. most of our sgility trials are outside. we have a few inside horse barns with dirt floors and one big akc event indoors on carpet. i only wish we had most of ours inside! most of the trials we go to are early spring and fall. brrrr cold and wet.
good job all of you, well deserved ribbons.
hugs,
puglette
:o)