We interrupt Brutus' Earlventure posts for some obligatory Halloween fun!  It's come down to the wire, but the Frenchies are still trying to make up their minds on what to be for Trick-or-Treat this year.  Maybe you all can help...
Ever notice that there are qualities about someone that just shout for a particular costume?  That's where this idea came from - Brute just has the face for it!  I swore I'd never use a dog costume that had arms, but to say this first one is a popular choice is an understatement (the photo's gone viral on Facebook).  Not sure how Brutus feels about being a villian, though...

I mean...  The facial resemblance is uncanny, no? 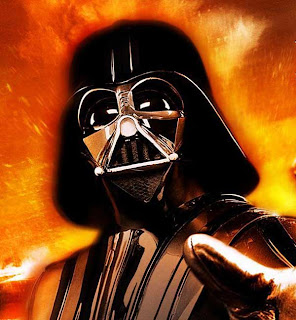 Then we were going through our Halloween supplies, and ran across some old things of Duncan's.  They met with mixed reviews form Brute.
Then I pulled out something a little more appropriate.  I think this one gets Brutus' vote.  He CAN fly after all, we just need an action shot of Super Brutus!
Such a well-attired dog as Brutus has to have something more comfortable to change into for the "after-party", so here is this years' choice:
OK, now for Carmen.  She's a little more of a challenge - partly because we had no "girly" costumes, and partly because she tried to eat everything I put on her!!
I was trying to keep it simple for Carmen, so thought maybe this cute spider costume would do the trick.  It was supposed to be a hat, but she kept grabbing the legs that dangled around her head and thought the ankle cuffs were fun to chase.  After a few minutes of failed attempts, we bailed on the spider idea too.
When actual costumes weren't working, I tried the utilitarian approach; just a simple T-shirt.  That worked until she found out Brutus wore it last year & she didn't want a hand-me-down.

Finally I found something fit for my little Drama Queen.  Simple, elegant.  Very Carmen.
And then of course my little diva needed to have something in case she got any invitations to a Halloween Ball.  She was completely comfortable in this snappy little number, actually wore it for over an hour and never even tried to roll it off!
Mason didn't feel like playing dress-up this year, plus Paul gets irked when I put clothes on his dog.  Thought about just draping a sheet with eye-holes over Mason and making him a labraghost (he'd just sit there), but thought I'd let the ol' boy keep at least a little of his dignity.  Instead, here's a recycled image from last years' Halloween post so that Mason doesn't feel left out here.
So from all of us - Darth Brutus, the Drama Queen, batty Mason, myself & Paul (who's birthday just happens to be today...) - hope you all have a super-Happy Halloween! 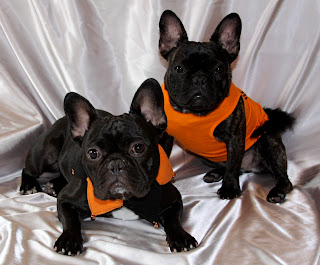 Now get out there and score some treats!!!
Posted by BRUTUS at 8:56 AM

Oh...my...DOG! While I do very much agree that Brutus is more of a Superdog, well...the Bark Vader costume is just too, too pawfect. And that crown for Carmen? Stunning!! But poor Mason most definitely looks put out with mom for sure.

Happy birthday to Paul, too! And I hope you all get lots of yummy treats today! Happy Howloween!

Darth Brutus!!!! Somehow Mom must have missed this on FB, but dude, you Have. Found. Your. Calling. Seriously. Go to the Dark Side immediately (I've heard they have cookies, BTW...), do not pass go, do not collect $200. You make us poor Jedis-in-training quake in our snowboots. That is AWESOME!!! And Carmen? Well, duh. Someone has to rule that household - particularly when Brutus is off gathering his forces. All that said, we're with Mason, except we protest costumes on the fact that they can be considered clothes, and we are diametrically opposed to clothes (except for our snowboots, and we'll get back to you on that). Although we like the idea of a labraghost! BTW, happy birthday to your Dad!

Oh no! Mom nearly peed her pants. We have visited your blog 4 times just to keepp laughing. Love it
Happee Halloween to you too!
Benny & Lily

You are hysterical. That Darth Brutus costume is just to DIE for!

I think Yoda would be a fine choice for next year, too!!

Oh Darth Brutus all the way. Looks exactly like the real guy. CArmen you are so pretty in that Queen crown. It is totally YOU!! Now just a elegant pink gown and you will have everydoggie drooling!!
Have a fun day!!

Youw choices wewe pawfect!!!
You look fantaboolous!
Happy Biwfday to youw Dad and lots of tweats and halloween fun fow all of you
smoochie kisses
ASTA

So cute! I hope Mason doesnt feel too left out! Happy b-day paul!

No matter what you two wear... you are soooo adorable!
Happy Halloween!
Kisses and hugs
Lorenza

OMD, you two are adorable! Carmen - LOVE the tiara :)

Darth Brutus is priceless and Carmen was made to wear that crown!

What great costumes all! Carmen is adorable in her crown - it suits her and S-Man definitely works for Brutus! Happy Halloween!
Hugs xoxoxo
Sammie and Avalon

I love Darth Brutus, but Carmen, your Halloween dress is so adorable! We love it!

I just about laughed my furs off at this post. TOOOOOOO funny. And adorable too.
PeeS... HAPPY BIRFDAY Mr. Paul.

You are always so clever with your posts - this was so good, so well done.

We think we vote for SuperBrutus and DivaCarmen as the costumes of choice:)

You two are too cute.Perfect costumes.Caermen,looove your crown darling. happy Halloween!

You two crack me up! Oh and Happy Birthday to your Dad! I do have to say Darth Brutus should be viral!!!!!
Snuggles,
Twix

happy halloweeny to ya'll!! :)
i vote for darth brutus and drama queen for sures! teehee!
(mason, dude, i totally know how you feel...my mama tried to put me in a ghost costume. i was like NO WAY, JOSE!!)

We just wanted to say Hi and Happy Halloween!

Man, we luuuv your costumes! You are one mean machine! Butt, so cute!

We have missed you a lot and luuuv you too!

That picture of the spider costume doing you in is just a riot, Carmen and poor Brutus doesn't look too happy in the lobster outfit! Must be too many legs for both of you!

First off, great to see Mason again. We miss him. Next, I am pleased to see how you were able to instruct your human regarding the proper outfit. Clearly Darth Brutus was the one for you.

And I noted how Carmen settled right down when she had her wee tiara on.

Darth Brutus rocks! That's such a winner! Carmen is so regal with her beautiful crown jewels and Mason so cute to agree to wear the head gear.

Happy Howl-o-ween to all of your and Happy Birthday to Paul!

Brutus, what a great Darth Vader you make and Carmen, you are quite the Queen. ;)

Brutus looks so cool in his Darth Vader costume while Carmen is so sweet with her tiara.:D
hope you all had fun!