I'm always bragging about Brutus & Carmen and their accomplishments.  I try not to do it TOO often on the blog, because as impressive as a bulldog in a performance venue is, if you aren't into that sort of thing it can get old in a hurry.  So today, it's time to brag about our tribal elder, Mason. 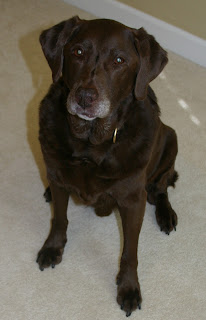 If you haven't followed us for long, you probably don't know much about Mason.  He's our 12.5 year-old chocolate lab, who has patiently tolerated the comings-and-goings of 3 different dogs in his life.  He not much of a blogger, more of a go-with-the-flow, low-maintenance kinda guy.  He's shown up in maybe 10% of our posts, but definitely has his own fan base!!
Other than being unquestionably loyal, one of Mason's biggest attributes are his toiletry habits.  Long gone are the days when he had to go 12+ hours while Paul was a "single dad" away at work, but still Mason's bladder has a legendary capacity to "hold it".  More impressively, somewhere along the line Mason learned to "go poo-poo" on command.  Seriously.  Don't know how we did it, but if you tell the ol' guy to go, he'll try his darnedest to oblige (and he is a prolific pooper, so it's not usually too difficult). 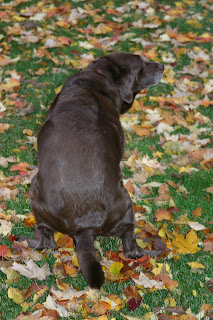 Last fall when we traveled up to New England during our maiden Earlventure, Mason got into the habit of leaving his "trademark" in each state we drove through.  Believe it or not, he was able to keep that streak going through our trip out West this past summer, as well as our most recent trek down south. 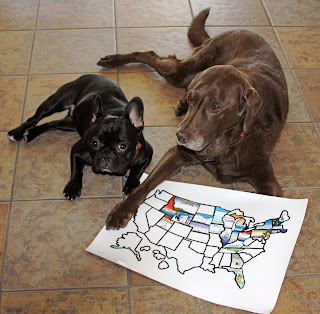 That being said, Mason has now pooped in a total of (drumroll, please...) 26 states!!  Not sure if anyone is keeping track of that kind of statistic, but his total is surely noteworthy. 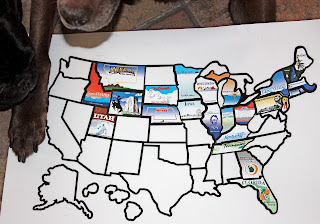 A strange brag?  Yes, I'd say so.  But hey, a guy is good at what a guy is good at, ya know??
When he's not traveling around the country in Big Earl, Mason enjoys copious napping and shedding as pastimes.  Paul is always saying that Mason is "the BEST dog EVER", and he may be right.  Anyone who could help raise two fiercely energetic Frenchies has to be remarkable, after all!
Posted by BRUTUS at 12:14 AM

Mason, our Angel Java would be proud of you, following right along in his footsteps.

Mason we just love that you have a poop map

That is pretty impressive Mason!!

Pooping is very much impawtant to US. Of course Mason would want to keep a MAP of where he was able to MAKE IT along the way!!
Grrrrrreat post!!!!

Well done, my friend! I have quite a ways to go to poop in THAT many states. Bravo!

Wow! On so many levels. Pooping on command, for starters, and then having pooped in so many different states, and finally (and probably most importantly) being able to count shedding as a pastime! Brutus and Carmen, we both think you are cute and respect all of your agility/command stuff that we could never pull off in a million years, but I think Mason is our True Hero. We know all about tribal elders, and the trials and tribulations they go through when putting up with the younger generation, so we are Most Impressed with Mason on so many levels. (Mason, make sure you get lots of extra treats just for not nipping those little bowling balls with legs in the butt. I'm just saying...)

BOL! Mason, that is a lot to brag about fur sure! I can't help but notice, that you have yet to do your business in our state....

Mason, you're a dog of many talents! We salute you! We also have a special affinity for those senior dogs -- they're a treasure!

Good for you, Mason! Heck, we haven't been in 26 states and probably never will be!
I poop on command too! It comes in handy lots of times!
We love your new header picture!

Being a consummate popper myself, I am most impressed with Masons skills. I am honored to live in a masonized state. Is he shooting for all 52? Or at least the continental 50.

Now, THAT was a very nice post - congrats, Mason - you are quite the accomplished pup. Phantom is an almost 12 year old gent who is a lot like you with the laid low go with the flow disposition. But he can't make claim to a 26 state poo contribution:)

Mason!
That sure is a big accomplishment!
Kisses and hugs
Lorenza

Licks from me Olive!

Mason! That is a real accomplishment. You sure are a talented doggie. Not to mention how patient you are with those little attention hog doggies you live with.

It was nice to learn more about you.

Whoa! I'm pretty sure we all needs to bow down to Mason's greatness! Gosh! That is a Most Amazing feat. I think his name needs to be up on a plaque somewheres. "Mason the Great Pooper - Pooped Here!"

mason,
you are my hero -- a real manly labradude type who is an interstate pooping sensation!! :)

Mason, you are my hero too! I am also a chocolate labrador - 8 months old. I am most impressed with your achievements! Love Brutus & Frenchie too.
Lotsa Licks
Casper Bear

You the bomb Mason. Bet no buddy has a poop record like that. Congratulations. Love the new header
Benny & Lily