Brutus spent a good part of his weekend at an agility trial hosted by our club, Medina Swarm.  We went as spectator for the most part, as he is too young to compete (dogs must be 15 months old, so he can't be entered for competition until October this year).  So that I could still be part of the action, I volunteered - building courses, setting jumps, timing runs - all sorts of jobs that I'm not really qualified for, but enjoyed nonetheless!!  This was a USDAA trial, and I worked in the masters' ring; got to watch & learn from many experienced dogs & handlers.  While I was busy in the ring, Brutus was a guest in a primo tent of our friend/agility instructor Jean, along with her JR terriers & a foster border collie.  Despite being crated away from home (he hates this, but it's good therapy for his separation anxiety), Brutus was a good sport overall.  Even though it got a little warm (75F), he had shade & a fan to keep him comfy, so much better than being stuck at home :)
Below is a shot of one of the agility courses, showing the very obstacles we are training on right now. Also shown are photos of Brutus at his campsite, being an almost-gracious guest (although he would have rather been out on the course himself).  BTW - if you are looking for healthy, home-made corn/wheat-free treats, check out our friend's business at www.3jacksdogbakery.com!
Tune in this week for a some video footage of the same scene (I got a new camera - yeah)!! 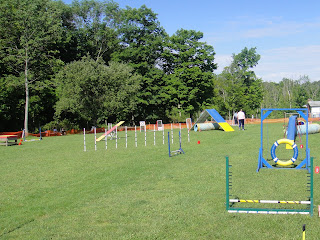 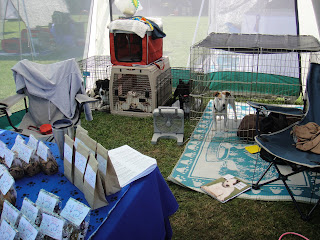 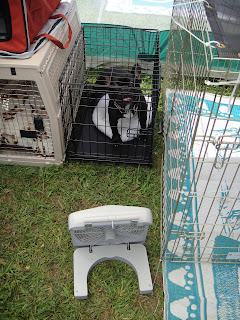 Not happy, but coping!  Note the shady surrondings & fan (both courtesy of our friend Jean) that kept The Brute cool & comfy :)
Posted by BRUTUS at 11:00 PM

Now that your mom can take video, I hope we get so see you struttin' your agility stuff in the future!
I'm doing puppy obedience now but my human hopes to do obedience & agility with me when I'm old enough.
Your pal,
Sedona