I guess we are official in the blogging world now, as we have been included in our first blogging "game."  One of our fellow bloggers & followers, Sedona (a Nova Scotia Duck Tolling Retriever)"tagged" us with a little assignment.  Here is the assignment:
1. Open your "My Photos" folder and select the 6th folder.
2. Select the 6th photo in that folder.
3. Post the photo along with the story behind it.
4. Tag 5 of your friends to do the same thing.
Following those rules, here's what I came up with: 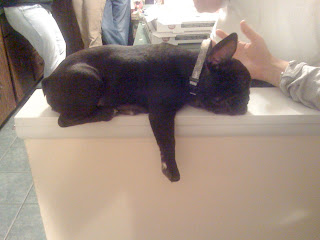 Brutus was just a wee little puppy (5 months old), and lots of people were dying to meet him.  He accompanied me to a party,  were we stayed for quite a while so that The Brute was exhausted.  I had been carrying him around for hours, ended up standing next to this little half-wall, so I rested his weight on it.  Next thing I knew he was out cold on the ledge, slept there until I got up to leave.  Note my protective hand in the background, as I was afraid he was so relaxed that he'd just flop right off.  You can't see it in the picture, but his other leg was hanging down the same way on the other side of the wall.  The quality isn't great (iphone photo), but it's still pretty darn cute.  To this day, he has retained the ability to sleep in odd places/positions, but this is one of the funnier ones!
So there you have it.  Now, I have to tag some others to keep this going.  We don't have that many canine friends that haven't already been tagged, so I'll include some humans in the mix.  So Lexi & Mayna/Aimee, you're on the list!  Tag, you're it!!
Posted by BRUTUS at 1:34 PM

What a great picture! You were and still are, adorable!

How fun! Since we have the new PC, my 6th folder and photo probably won't be too old!! I will do this this weekend!!!

Brutus, great shot! I *love* your picture...you must've been "dog tired" to be able to fall asleep in such a precarious position!
Your pal,
Sedona

Hi-Woo, Brutus! Me & my mom looove Frenchies. I have a few frenchie friends in fact, they are SO much fun. Mom says maybe one day we will have a frenchie brother or sister!! Any-woo, it is nice to meet you!

Oh brutus, you are so cute!! Your photos become more and more special everytime we see your cute little face!

Sugar just did a little grunt, I'm sure she's saying hello to you!