Into the wild blue yonder

Don't have much to post this morning, so this is mostly a quick update.  I dropped of Mason & Brutus yesterday afternoon with minimal drama (on my part).  Only felt really bad when Brutus noticed I wasn't following him back into the kennel area & put the brakes on, trying to come back to me.  *sigh....*  I just talked to the staff who said both boys were doing fine, only hiccup is that Brutus wasn't really interested in eating (not surprising).
Paul & I boarded a flight to Vegas, and after an extra 45 minutes on the tarmac waiting for our pilots (guess we couldn't expect to leave without them), had a fairly smooth flight.  Got to the house here around midnight (which is 3 AM our time), and had a decent night's sleep.  Now the car's loaded & we are ready to hit the road for California, about a 6 hour drive to where we're headed (I'm making our destination a surprise to you all, keep the suspense building, you know).  Here's the only photo I have so far - try to post again later today! 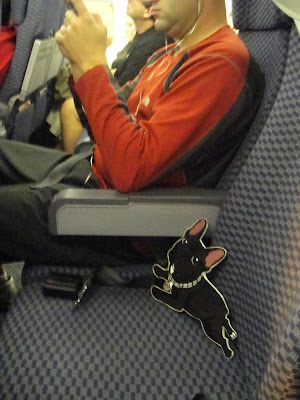 Flat Brutus flying the (somewhat) friendly skies
Posted by BRUTUS at 11:51 AM

And the other passengers thought WHAT?

I don't think Sugar eats much when she is away either... but she sometimes doesn't eat much when at home... such a danty girl!

Glad there wasn't drama when leaving your boys... I bet they miss you but want you to have a blast!!

Sugar & I welcome you to CA... it's cloudy and windy where we are today hope the weather is better where you are headed!

Glad to know everything goes well!
Kisses and hugs
Lorenza

Now did Flat Brutus count as an extra carry-on, or did they just charge you a full additional fare for him?