Since almost any summer day is a hot day as far as Brutus is concerned, so I thought a pool would be a great way to cool off.  I put some water in it for the first time last week, thinking he'd get the idea & hop right in.  Not.
The part Brutus liked best was barking at the hose & taking a drink out of what he saw as a very large water bowl.  Duncan, my old JR, loved to swim in his younger days & hopped right in after not having seen water for a few years.  Even with only an inch or two of water & Duncan's demonstration, it took me 10-15 minutes to convince Brutus that he was supposed to jump in.  Maybe he thought it was an outdoor version of a bath, as he isn't fond of that activity either.
We've heard that Frenchies aren't good swimmers - but they make usually make great waders & splashers!  After I threw a few treats in (they sunk) Brutus finally got in splashed around a little in order to get the sunken treasures.  I don't think swimming will be on his "top 10" list in near future, but I hope that eventually he'll learn that it's a "cool" idea! 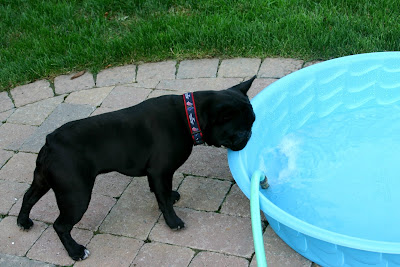 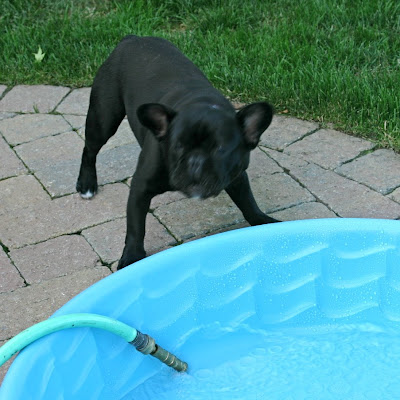 A green snake!  And it's spitting water!!
Cue barking frenzy... 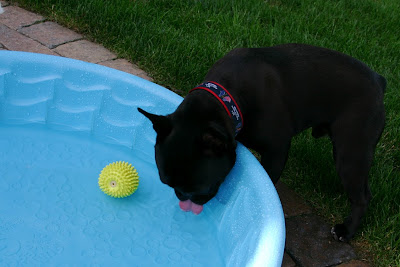 I know I'm a thirsty boy, but why do we need such a big water bowl out here? 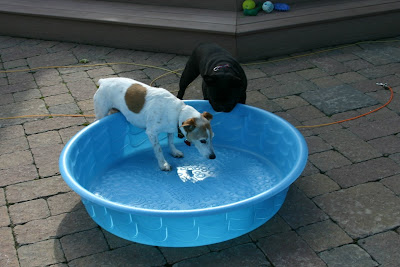 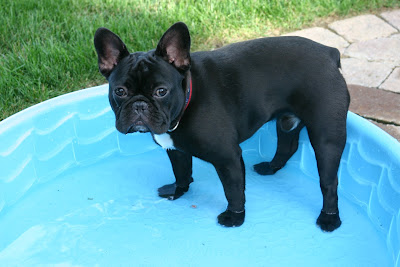 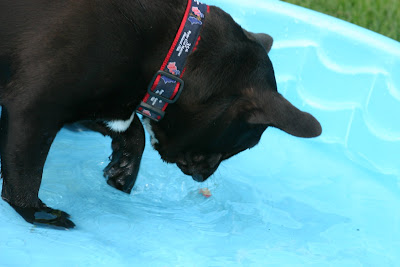 Oh - bobbing for treats!  Now there's something I can get into!
PS - I just re-titled this blog, have to give credit to Bonnie (of ScrapsofMe) for such clever thinking!!  Thanks for your comment :)
Posted by BRUTUS at 1:43 AM

I am with you Brutus, except for drinking stay as far away from that evil water as you can. I hope your treats tasted good.

I think Sugar would react the same way... my parents girl Bailey HATES the summer pool.... but boy did my old boy Sherman LOVE IT! He'd play soccer in the pool, it was so cute. I have a picuter of him in the pool on my blog. I miss him!

Brutus looks so cute, as usual!!!

We just got a pool but haven't got to try it out yet - we are not sure what we will do.

Have a Fantastic Friday.
XOXO
Lilly, Piper, Carrleigh and Java

Yay Brutus! Good for you for getting in the pool! Maybe you'll really like the water once you get used to it.
Your pal,
Sedona

You are like me, only get in the water if bribed. Banjo won't get in our pool unless mom puts him in! Have fun fishing those treats out!

Is that what is called a FRENCH DIP?
teehee...

Mimiature schnauzers like me are supposed to enjoy swimming, but I never did take to the pool my people got me. I was afraid that any moment someone would whip out the dog shampoo!!