Happy Friday!!
Dog Agility was born in the 1980's as a "halftime" entertainment during horse jumping competitions.  It caught on like wildfire and has become the fastest-growing canine performance event.  Thanks in part to it's presence on ESPN's televised "Great Outdoor Games", agility has gotten much more popular with the general public over the past 10 years.  Along with the AKC, there are several organizations that have arisen to promote the sport, and more training clubs are popping up every year.  Any breed is eligible to compete (mixed breeds allowed in all venues except AKC), but sport is dominated by herding dogs (Border Collies, Shelites, Austrailian Sheperds) retreivers (Labs, flat coats) and terriers (Jack Russells, Carin terriers), with Schnauzers, Corgis and Westies always making a reasonable run.
So you can imagine the looks I get when I show up with a French bulldog.....
Brutus shows a unusual athletic ability for a breed that is known more as a couch potato. Although I started doing agility just to help drain his endless energy, it turns out that Brutus has developed quite a following.  We hope to make our show debut this fall (he can compete once he turns 15 months in October), but for now have really enjoyed doing agility demonstrations at local dog-related events.
Sure, the other dogs might be more flashy, but Brutus is predictably the crowd favorite. No one ever expects a stocky little guy like him to be able to fly around the course, or get his body off the ground at all. Luckily people are so enamored with Brutus, they don't seem to notice my poor attempt at handling!!  He manages to win their applause every time, and always performs better in front of a crowd than he does during practice.  I just come along for the ride!!
The agility photos I posted a few weeks ago proved to be one of our most popular posts ever!  Not suprisingly, I have received many requests for more photos.  You wanted to see tunnels and contact obstacles (A-frame, dogwalk, teeter), so here you go!  Since I was busy handling Brutus, I must give credit to my dad & step-sister Aimee for capturing all the action!
Here we go--- 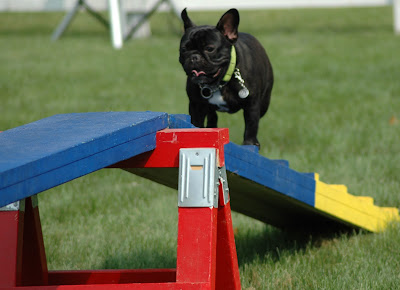 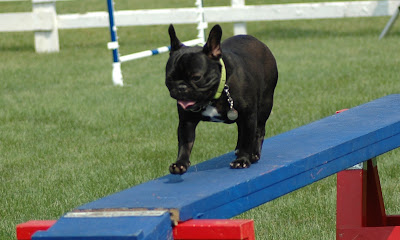 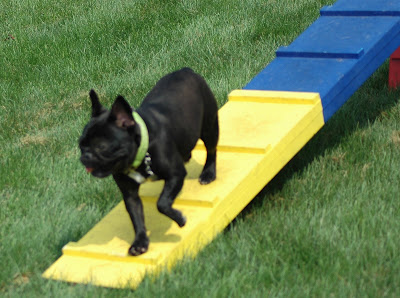 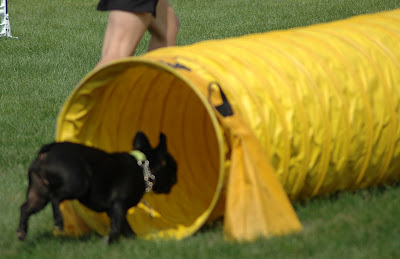 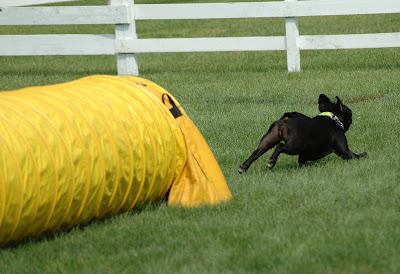 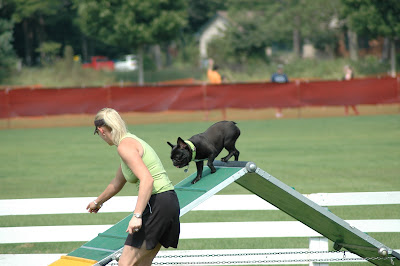 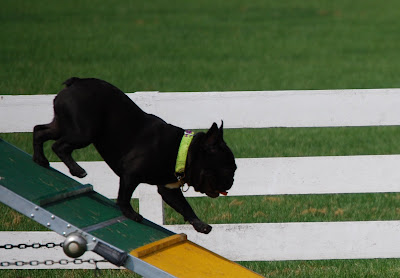 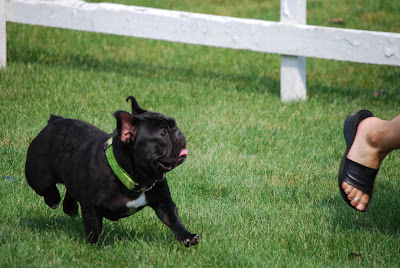 The Brute focussed on his momma!
I never noticed his ears curled when he ran until I saw this! 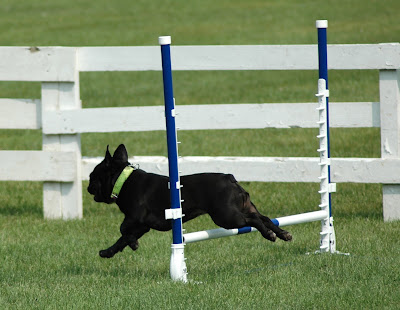 Had to include one jump for good measure!
If you are new to our blog and want to see more of Brutus doing agility, check out our "Flying Frenchie" post earlier this month for some amazing photos!
Well, we're off to practice some weave poles (notice there were none of those pictured... LOL).  See you next week!!
Posted by BRUTUS at 12:17 AM

That looks like sooooo much fun! Do you ever see any wee Scotties compete in agility? I love to run and jump...zoomity zoom zoom...not so sure about the tunnel though.
Congratulations! You look AWESOME!
What a jock!
Bonnie

You make that agility look fun. Mom wishes there was an agility course around here so we could give it a try. I'm pretty fast and agile!

My my Brutus you certainly look fine goin all up and down and in and out.

You are most talented to be able to do the dog walk and to actually hit the touch zone on the a-frame. I think in October when you are competing I will still be in beginner agilities.

We had a shortie dog in our class for a while and had to keep lowering the jumps. Hee hee.

Brutus you soooo rock!! Way too many shiny things in the world for me!!

Good job, Brutus!
I enjoyed a lot looking at your pictures!
Kisses and hugs
Lorenza

Awesome job Brutus! It is fun to see you when your ears are curled up and with your tongue sticking out(giggle). You are too cute.

Great pictures! I love your 'concentrating face'! And I'm super impressed that you are supposed to be a couch potato and are still out running and jumping and things!

WOW Brutus!!!
YOU looked GREAT out there, really impressive!! Man!! I like that concentrating look, it is cute.

Keep up the good work and you will be beating all the other dogs, hehe

Very impressive Brutus. You look like you were having alot of fun!

This looks like so much fun. When we saw the first picture, the colors reminded us of SuperMan!!

Brutus you are awesome!! We LOVE the pictures. Lily was afraid of her agility class. Mom had to quit. We nominated you for an award. Check out our blog
Benny and Lily

Agility is loads of fun! We might look short and chubby - but we can have fun with the big dogs! I've got my own jumps and a tunnel up by the lake so we can do it when we're up there (we've got no yard in the city)!I showed it off here: http://wrigglebutts.blogspot.com/2009/07/nice-gift.html (pix would be better if mom didn't have to handle me AND take pix)

Awesome pictures!! You know I am a sucker for all things agility.

Get workin' on those weaves.. we should combine Marge and Brutus into one super agility dog.. he can hit the contacts, Marge can do the weaves. Just this week we tried her on the A-Frame, and she goes over it like a freight train and flies off without hitting the yellow. LOL!

I love that his collar matches your outfit. :)

You are a real pro at that Brutus!
And I just know you are having so much fun!

I left you an award on my blog!

Brutus, you make it look easy. I just love seeing all the photos of you in action!

Sorry it has taken me so long to stop by your blog - but, I'm so glad I did! You have a dog haven's blog. Adorable pictures and great captions! And a little bit for everyone - I grew up with pugs and can definitely see both the similarities, but also the distinct differences between them and Frenchies. You also have my favorites - the hounds of course :)

Brutus - congrats on the agility work and you have a great blog!!!!

You're sure a master at agility, Brutus!
Good for you!

Very cool moves, Brutus! Be sure your human gets someone to take some video to post next time...we need to see you "live"!
Your pal,
Sedona