In what has become a common phenomena, Brutus' cute, extroverted self brings a significant amount of attention my way by virtue of being on the other end of his leash. Whether it is through blogging, obedience training, agility, dog shows, canine fun events - the list of people who I otherwise might not of had the pleasure of meeting if it weren't for the irresistible Brutus keeps growing!  And then when they find out that Brutus has his own blog...  They might think it's nuts at first, but before they even know what hit them, we have another follower!
We love it when new people start following our blog, especially those who had never even visited a blog before, or thought that a dog could carry such a thing on his own content!  Now we have something new to be proud of - all our fun has inspired one of our new friends to start a blog themselves!!
Brutus & I met Courtney through our agility club, Medina Swarm.  She competes with her Brittany spaniel Sadie Lou, but shares her home with quite a few other animals as well!   She has two labs, what seems like a zillion other Brittanys (there are actually 6, mostly rescue dogs), a few cats, and a herd of 13 miniature donkeys!  Sounds like an awful lot of great blogging material to me!!
Some of you might recognize Courtney, as she has made a few cameo appearances on our blog, most recently tending to the dogs in our dog party post from last weekend. Please go pay a visit to her and her menagerie over at her new blog, Kennedy's Funny Farm!  They've only got one post under their belt, so I'm sure they'll love a big, warm welcome from the DWB community to inspire them to do more!  Stay tuned there for posts not only for Courtney's adventures with her dogs, but also with some totally cute, fuzzy little equines!!
We went out to visit Courtney last weekend, and Brutus got to meet her pack as well as her herd!  He felt an odd kinship with the donkeys, their disproportionally big ears and all...  So, to give you a taste of some of the members of the Funny Farm, here are some pictures of Brutus meeting his first equines! 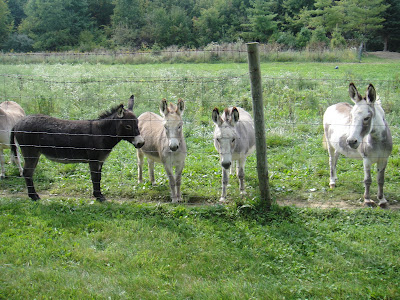 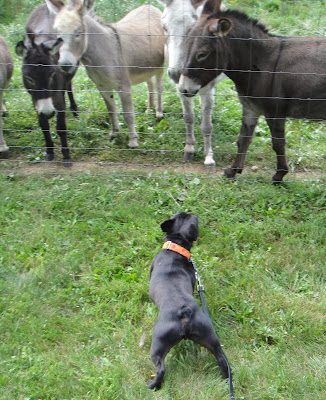 Boy, he sure is funny looking!  And what's that strange noise he makes?  Sounds like he's yelling "yabba, yabba"?? 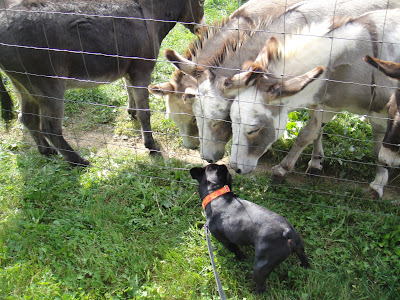 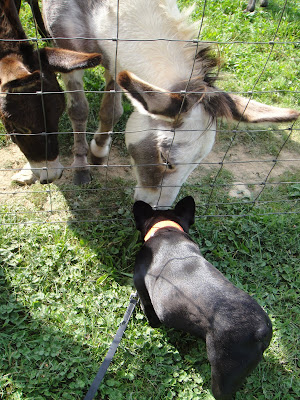 Don't know what you are little guy, but we've decided to be friends with you on the basis of that fantastic set of ears you've got!!
Posted by BRUTUS at 12:02 AM

Anybody with ears that big has to be your friend! Because otherwise they'll blab all your secrets, which they'll hear by using their freakishly large ears.

Brutus, Thank you for telling me about a new friend to meet. I have never met a donkeydog. They are pretty big. Did you tell them any secrets??

licks and sniffs, Sasha
p.s. Mommy says they kind of look like your mascot at OSU(giggle).

Ha! Same thing happens to me. I cannot go out in public without people making a fuss over my large and handsome self.

I will go and visit your new friend with the big fuzzy animals.

We love to meet new friends!! We're off to visit your buds.

Always nice to see the efforts to bridge the species gap!! I love making new freinds too!! We'll go over and welcome Courtney =)

Hey Brutus! How cool is that, to meet a bunch of donkeys! And what a welcome they gave you!
Speaking of welcomes, I'll mosey on over to say hi to them on their blog!
Your pal,
Sedona

Those are interesting looking critters and I would wanna check them out too. But mom says to be very careful cause donkeys have been known to stomp doggies to death. I guess that is why some ranchers use them to guard their sheep from the coyotes.

You are always making some interesting friends brutus. Just be careful around those guys.

We have gone to visit your new friends...your friends are our friends!

Hi, Brutus!
I see a donkey everyday here! But I have not been able to be that close to him!
I am going to visit your friends now!
Kisses and hugs
Lorenza

Aw they are sooo cute! I love donkeys. My trainer has one named Clarence at her stable. I'll go say hi to your friend. :)

We love new friends!! Even ones with long ears that go hee haw!!

Love the pictures of you with the donkeys! They make you look even more handsome!

Woah! Dude! Those are some seriously strange looking critters! Did you get a tooth on one of them? How do they taste? Are they armed and dangerous? Looks like sharp feetsies at the bottom of those long leggies.
Be careful,
Bonnie

LOL! I desperately want Marge to meet some hoofed friends just to see her reaction. For now, we'll live vicariously through you guys!

Will definitely go check out the blog once I get on a computer that works (AKA my Macbook).

How cute your new friends are, Brutus! We're off to go say hi!

Those are some very strange looking animals. It was nice of you to be their friend. We're going to pop on over to that new blog right now & say howdy!

OH DEAR! Now you've got my Mom trying to find one of those little guys! She's wanted one for quite a while now, but we try to keep her distracted! She wants one as a companion for her old horse (they don't eat as much as getting a regular sized horse for a companion)because she's not sure how long we will have her son's horse, Tuffy!

She's planning on letting us sniff our way on over to your Friend's Funny Farm to check it out! The Corgi Country Crew