This past Sunday Brutus and I got invited to a dog party, hosted by one of our agility buddies, Jenn!  Dogs and humans alike had a blast!  There were more dogs (17 best I could count, but they kept moving...) than people, and it was fun for all!  Us humans hung out & ate.  The dogs had the run of Jenn's yard, complete with a pool and sandbox!  There was even a doggy egg hunt (snausages inside), and a doggy pinata - Jenn totally outdid herself!!  This is a bunch of dogs who usually "work" together (at agility practice & competition), that finally had a chance to play together!!  Yahoo! 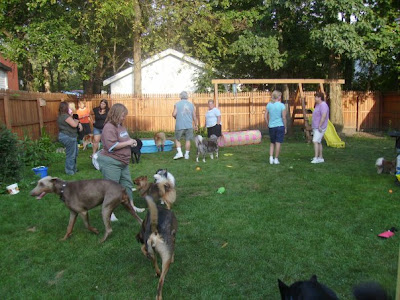 As the guests arrived ... 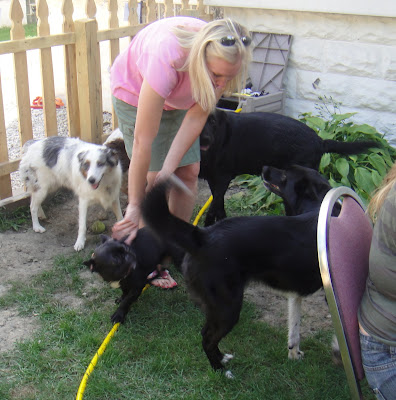 ... our friend Courtney made sure everyone was properly introduced! 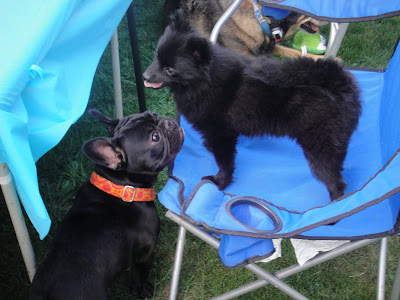 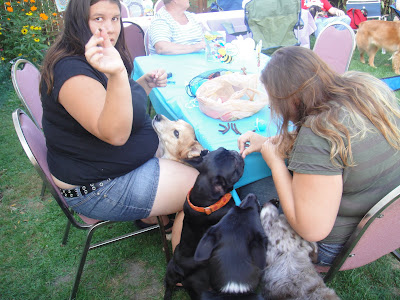 Brutus likes this picture - Amanda is asking if he can have a treat, while the other Amanda (they happen to both have the same name) gives him one!! 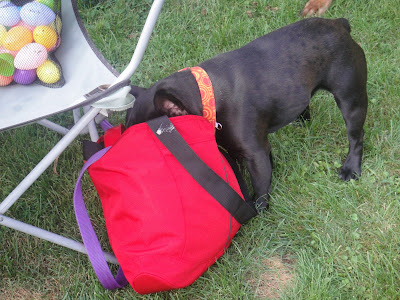 Brutus made sure that everyone brought something fun or tasty! 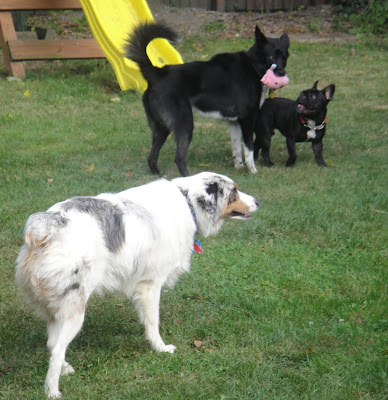 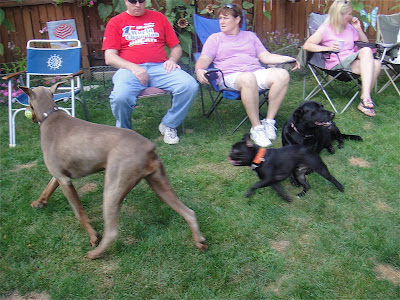 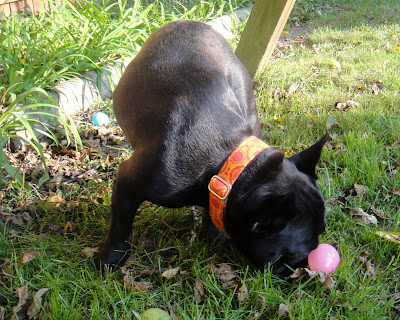 It doesn't have to be Easter to have an egg hunt - especially if there are snausages inside!! 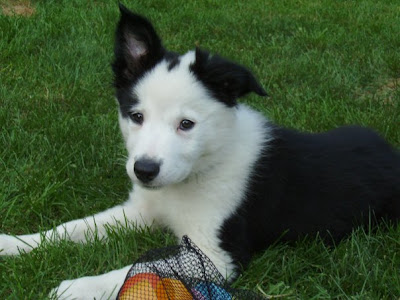 This is Riot, a Border Collie puppy. He is aptly named... 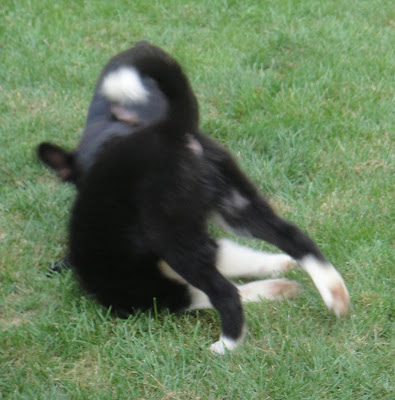 ...as he was a match for Brutus!  Lots of body slams, take-downs and running!  Sorry for the blurry photo, but they never sat still!! 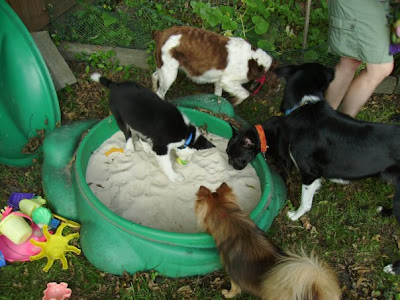 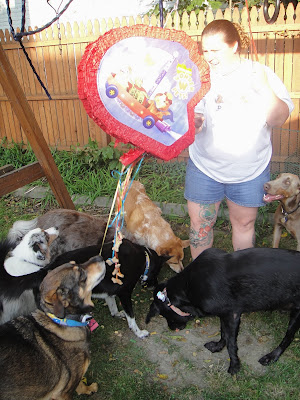 Here's our hostess Jenn with the dog pinata (bones inside).
There was enough for everyone, so the dogs all played nice! 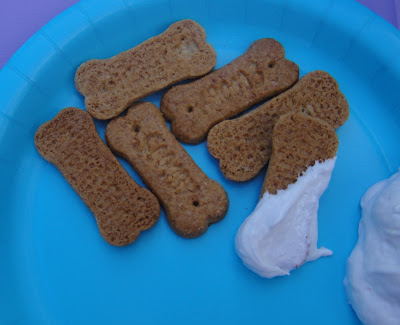 The humans ate hot dogs & hambarkers, and even had a few yummy "biscuits" (dog-bone shaped graham-crackers) for treats of their own! 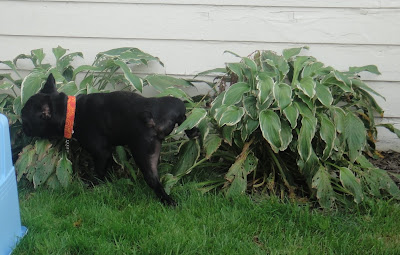 Brutus made sure that all the plants stayed properly hydrated during the party!
It was a great party, and we send our thanks to Jenn for putting the whole thing together.  All the dogs were contentedly exhausted by the time wrapped up, so it made for a quiet night back home.  Brutus made lots of new friends - it was great to see all the dogs interact so well together!
We'll leave you with a photo of Sadie Lou, who was one pooped pup after all the festivities!! 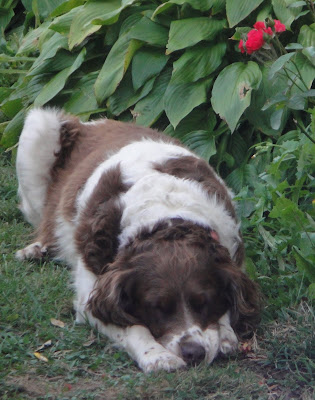 Brutus, that is so cool. I wish one of my doggy friends would have one of those. I am going to work on Mommy to have one for me and my friends. I am glad you had fun and made new friends.

Oh, what an amazing looking part - wish I could have been there!

Looks like you had a blast!! and you were right in there with the big dogs. I would have been worn out on the way home just like Sadie Lou.

Good job, getting some treats from Amanda!! LOL

What a fun pawty, Brutus! Puppy Riot sure does look like a riot!

What a wonderful party - looks like you had fun.

WOW we are jealous of all your dogtastic interactions!!!!! Great party!

That looked like a terrific pawtay! It's great that you and your furiends can get together like the hoomans do.

Wow what a great party!

I didn't see the tail on Inky at first and thought for a second it was a Schipperke. I was about to get excited lol.

Did anyone swim or was the sandbox a bigger hit?

What an AWESOME party..Mama loves the "Egg Hunt" idea!!

WOW! The hostess sure knows how to through a party! Looks like you had a great time. Easter eggs filled with snausage...What more could a pup ask for?

Wow looks so fun! I might have to host my own English version.. shame we can't plan a day ahead because of the English weather *sigh*!

Love the photos! Riot is so adorable!

What a party animal you are Brutus. Wow a egg hunt and a pinata that party looks totally fun. Good job keeping all the plants watered. Thats a very important job that we take seriously. That party looks like a good way to get over the Buckeye loss.

Oh my: that Riot looks to be khwite the funster!

Oh wow Brutus, that looks like so much fun! But I don't think we could ever take Sis to one of those things. She would have a hissy fit! We are glad, even after your team's loss, that you were able to enjoy yourself.

Ha, ha, you cute doggies had all the fun while the humans did all the work! Don't you just luv it when that happens?

Brutus what a blast. You sure are having fun with all your friends. And a sandbox! what could be better
Benny & Lily

Wow! That looks like a killer party!!! I think you should convince your humans to do that on a regular basis!

Hi, Brutus!
Sure you all had a pawesome time there!
Lots of funny activities and a pinata included!
Kisses and hugs
Lorenza

I've never been to a dog party....that is pawesome! I'm glad you took some responsibility and kept the flowers watered!
Snuggles,
Twix

Brutus looks like he had an awesome time! Marge would love one of those things as long as the other dogs didn't try to jump on her or sniff her too much. She'd like it even more if all the doggies were around Brutus's size!

happy to see you meet all those new friends

What a STUPENDOUS party! So many FANTASTIC things to do with your friends! What a blast and a fascinating idea... Wonder if we could get Mom to put one of those together? Hey, Moooommm... OC

HOLY COW that is my kinda party!!! Emma is sooo pretty- Dobermans are my favorite, I always find them at the dog parks and want to play (my best friend was a dobe when mom first adopted me- I havent seen him in years so am always trying to find him..) And is that another aussie I see?! Holy cow and a SANDBOX! Wowzers, I gotta tell mom to get us a sandbox!! Our old yard had tons of dirt so I got to dig anytime I wanted, but at our new house theres only 1 spot I can kinda dig in, and its not very nice dirt......

Thanks for sharing the FUN!

p.s.- mom has scheduled me for a new agility class here in our new town- woohoo!