Over the last week we have had some neat encounters with nature right in our own yard.  You'll think we live in the Amazon, not Ohio, when you see these creatures! Hope none of you are too squeamish, as neither of the visitors we had are exactly cuddly...
First is a common but remarkable resident in many North American backyards: Argiope aurantia, a type of orb spider known as the "Garden" or "banana" spider. 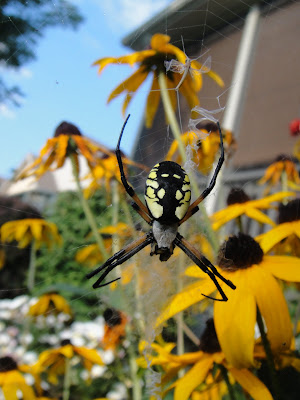 Isn't she spectacular?  It's hard to appreciate how big she is, but it is common for female spiders to as large as 28mm.  The males are much smaller (5-9 mm), and are often eaten by the female after they mate with her (yikes!). 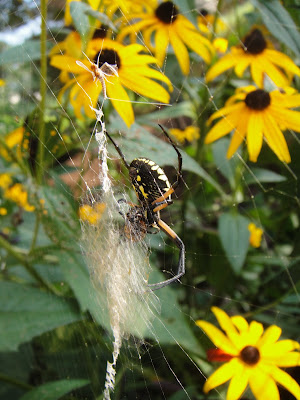 Orb spider webs are often over 2 feet in diameter.  That zig-zag line down the middle is called a "stabilimentum", and is always present.  It is thought that it somehow broadcasts the presence of an otherwise hard-to-see web to birds, so they don't crash through and make the poor spider rebuild the whole thing.  I don't like spiders much, but can certainly appreciate the beauty this big gal, especially since she is outside!
Just the day before that I had another visitor, this time on my front porch.  You probably won't believe this, but it literally knocked on my front door!  I heard creepy scratching sounds coming from the porch, so tentatively peeked out the front widow to see what it was.  Imagine my surprise when I realized what it was: 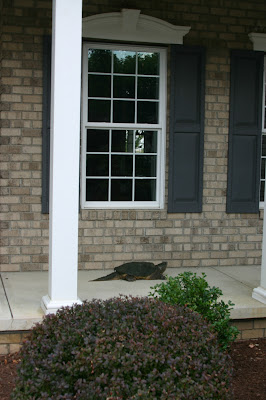 That's a Northern snapping turtle!  He was HUGE!  I don't have the slightest idea what he was doing on my porch (he had to crawl up a pretty big step to get there), but he was standing on his hind legs and trying to climb up my front door when I first saw him.  My first thought was to run & get the camera to get some pictures of this strange guest. 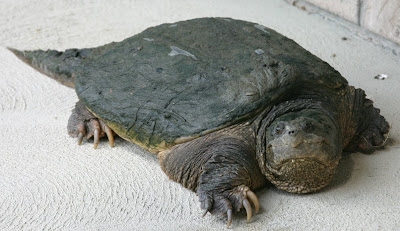 Look at the size of those claws!  I wasn't about to mess with him!  So my second thought was, how can I get him outta there??  I didn't want to hurt him, but I wasn't in the mood to lose any fingers either, and he wasn't going anywhere on his own.  I tried to call animal control, but they weren't in (it figures).  So I did the only other thing I could think of to get rid of a 30-lb snapping turtle - I called the police! 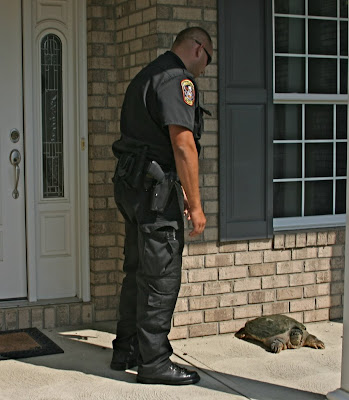 I can only imagine what dispatch was thinking when a woman calls and says "I have a huge snapping turtle on my front porch" - yeah, right.  But I can tell you the when the first officer to arrive came striding around the corner with her gloves already on and saw how big the turtle actually was, she immediately called for backup!!  Since I live in a township & the police department is small, the second officer to arrive was actually the SWAT team!!  The officers luckily thought the whole scenario was fun, and seemed to enjoy the challenge of removing the turtle, as compared to responding to the typical call of quarreling neighbors! 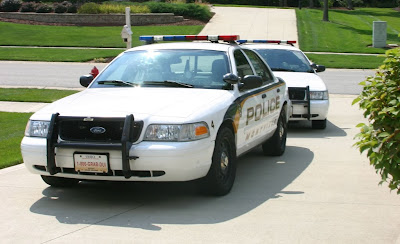 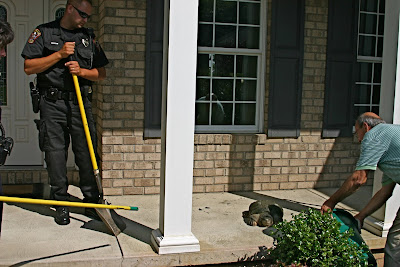 A snapper might not be fast on his feet when on dry land, but his head could shoot out a few feet in the blink of an eye, and supposedly has the second strongest bite of all animals (only alligators can generate as more pressure per square inch)!  He REALLY didn't appreciate that we were trying to help him - he was vicious!  But with the help of some long-handled tools and a really big bucket, he was successfully removed from my porch and safely deposited in a nearby pond.  I was relieved to have him relocated sucessfully, and just glad the dogs didn't find him before I did! 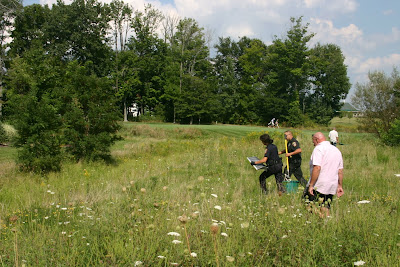 Thankfully we haven't heard from the turtle since.  What a great story!
I still have one more bit of nature to share with you today.  Remember the trip we took out west earlier this summer (see the Flat Brutus posts)?  This was one of the souvenirs we brought home: 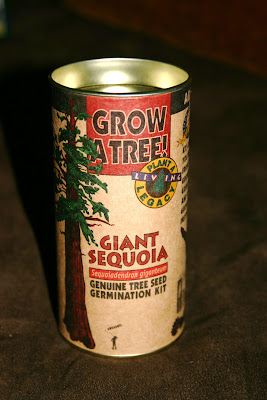 I followed the directions, planted the seeds & waited.  After 20 days in the fridge, I moved the container to the windowsill as instructed.  Sometime over the weekend while we were away on our "Earlventure" (thanks to Sam of Margeblog for coining that term - LOVE it), a little miracle of nature occurred: I am now the proud caretaker of not one, but TWO giant sequoia seedlings!!  I kept Brutus away from the other wildlife (for his own good!), but let him check out the baby trees: 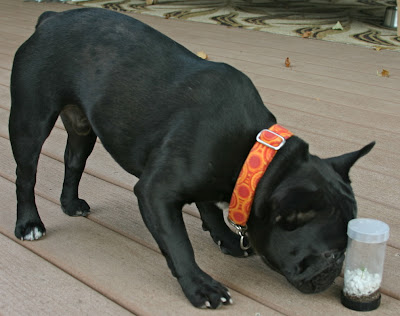 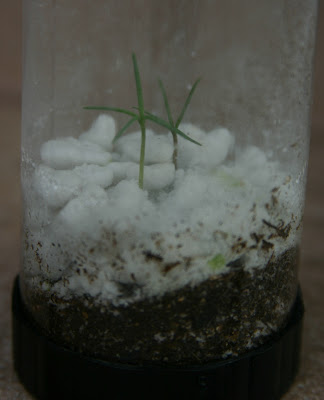 Can you believe that those fragile little wisps have the potential to grow to be the largest living thing on the planet?? 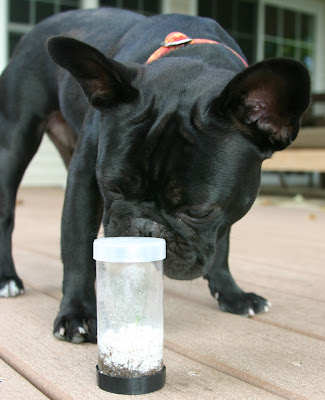 They do grow quickly (up to 3 feet a year), but I don't think we'll be decorating the sequoias for Christmas any time soon!  Hope my withered brown thumb can be a little greener than usual for this project!  Wish me luck!
Posted by BRUTUS at 10:26 AM

Wow, you've had quite the encounters with nature!!! THe momma was not thrilled about the spider, but thought the turtle and new trees were pretty cool!!!!

Can't wait to see pictures of teh trees as they grow =)

BOL to the snapping turtle!!! And the spider actually made our mom gag!!!!!!

Oh and we wanted to thank you for the xylitol comment- Mom put some stuff in the comment after yours that she forgot to mention on the blog.

Momma used to live near a snappy turtle nesting area and always had trouble when walking my Grandpa Angus in the spring time. He was a wee bit too curious.

Looks like an exciting day for the local police force. I bet they enjoyed the break from bad guys to have some fun and it will give them lots to talk about back at their fort.

Good luck with the tree. Hopefully Brutus won't water it too much.

WOW! what an adventure! I loved the story of the snapping turtle! I bet the police were happy that this was a "fun" call as opposed to, say a dog-fighting thing. :)

Wow, how in the world did that turtle get to your porch? That is incredible Brutus. Lucky you weren't outside on security patrol. We just got a kick out of the story though. Love that the police handled the situation it was great. Did they ask mom why she was snapping pictures? Or did it seem like a normal thing, well normal considering there was a huge snapping turtle on your front porch. It looks like you are trying to figure out a way to water your moms baby trees for her. BOL.

Hi Brutus & mom!
Ok, that spider totally gave me the heeby jeebies, but you're right- she is pretty!

And I am so glad you got that turtle safely relocated! You guys are full of adventures!

So much wildlife in one post! We're impressed. Love the spider pix - and hope your little trees grow large!

Wow, what a gorgeous spider and what a pawsome turtle! Those are great encounters. Good luck with the Sequoias!

The spiders were khool!
The turtle was furry snappy!

And I khan see Brutus pondering his pee-mails on the seedlings!

I have to tell you that Mommy is just a little freaked out right now. The spider was enough and then you have this "thing" on your porch. Where do you live?? Is this some attempt to try to scare away a Badger fan?? Brutus, I am so glad you didn't find it, you might have gotten hurt. I couldn't stand for anything to happen to my pal. I am going to start a Friday college football post, come and check it out tomorrow if you dare.

licks and sniffs,Sasha
On Wisconsin!

Wow! What an exciting adventure with the turtle. Sure breaks the monotony of a small town police officer's day. :)

I want a Sequoia tree! That is so cool. Can't wait to see it grow.

Holy crap Brutus..becareful in that jungle. I would start wearing some body armor.
Benny & Lily
PS. Bull headed in French? bullheaded..guess thats all of us

That was a great adventure with the turtle but the spider is creeping us out! Hope the little trees keep growing cause it will be fun to see how big they get.

You gave the police and the Swat team an interesting day!
Kisses and hugs
Lorenza

What an adventure with the turtle!

Those spiders looks scary!!! Stay away from them Brutus!

Good luck with the trees, those will be really neat!!!

Wow what an adventure with the turtle! What cute trees. Good Luck with them! We love the nature post.

We used to see snapping turtles at the conservation center back in New York. Evil-looking things -- like refugees from a Japanese monster movie. Glad he was removed successfully!

Snappers are SO NASTY! We sure hope the police were very careful!
How neat that you're growing sequoias, Brutus! You'll have to give us updates from time to time so we can see how big your trees getting!

the spider is cool - we we loved the turtle and the story - so happy it had a great endibg - wonder hwy he was up at your house!!

good luck with you little trees that potential is really impressive

Heavens those are some ugly creatures at your house. I bet Brutus is wondering how long before he can "water" the little trees, lol!

Whoa!!! I saw a snapping turtle in a parking lot when I was an underdrad at UF and they are quite something! I can't imagine what I would do if it were on the front porch scratching at the door! Quite something when you need the swat team at your house! The peacock was much more cooperative ;-)
it is funny reading about the sequoia, I think one of my first visits to your blog was a later update on how your little tree was doing!
Lovely spider though I agree the are much prettier outside!