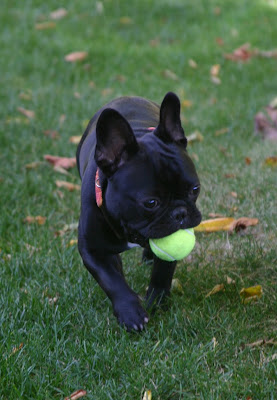 Recently I discovered something new that can drain Brutus' endless energy: a tennis ball!
I had tried to get Brutus to play with balls in the past, but he never had much interest (other than chewing on golf balls).  Then I happened across a tennis ball the other day - it had been in our gift bag from the dog party!  Brutus wasn't doing anything at the time, so I gave it to him.
At first he just stared at the ball, sitting on the floor in front of him.  He considered trying to eat it, but it's size and texture was not conducive to swallowing.  Then I tossed it just to see what would happen.  Not much initially, but then Brutus realized Mason wanted to play with the tennis ball.  When you are the little dog, there's nothing like a good game of keep-away!! 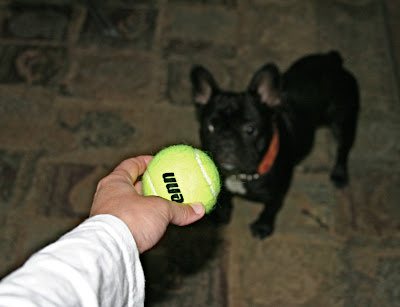 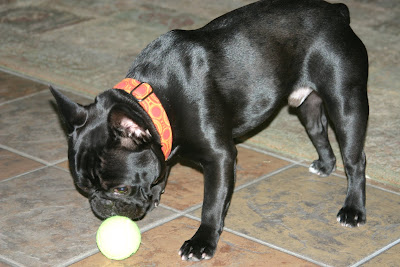 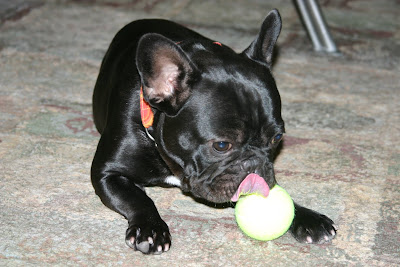 And that furry stuff feels funny on my tongue.  Wonder if it'll even fit in my mouth? 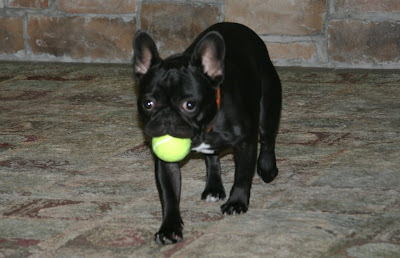 Mwff fumph wif dis?
(it was hard to understand what Brutus said here, as he had a tennis ball in his mouth....) 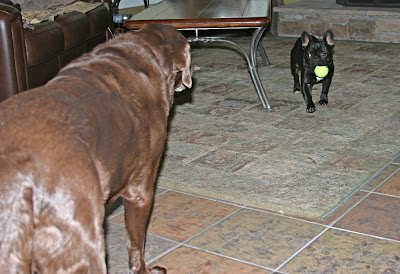 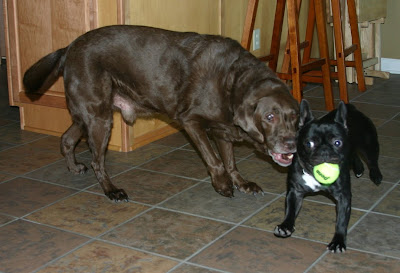 Can't catch me!!  Yeehaa!!
After some near disasters involving my interior decor, I decided we should take it outside. Mason lost interest (he's having a bad time with allergies right now, on antibiotics and prednisone for the itchies), but Brutus was all about chasing the ball around the back yard!  He even brought it back to me multiple times.  So funny to watch him bolting around with the tennis ball jammed in his big mouth! 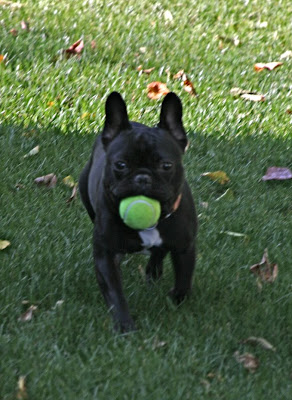 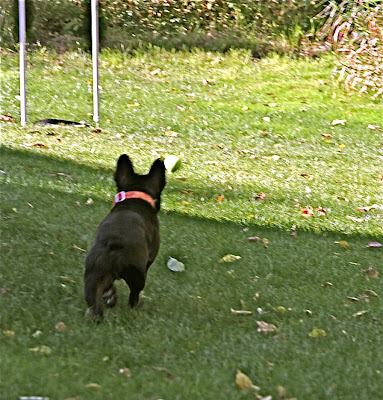 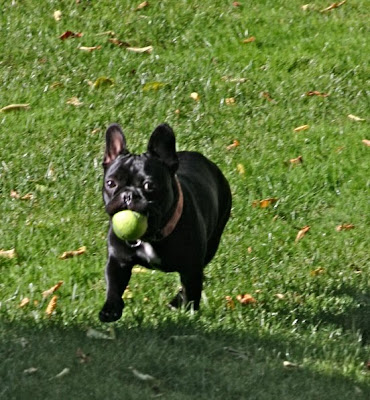 Right back at ya!! 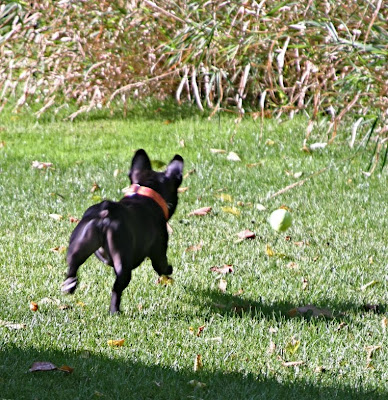 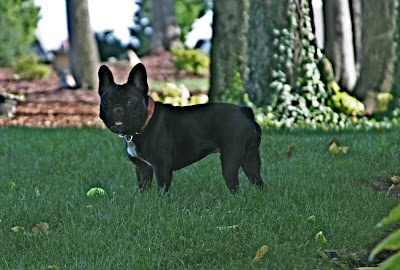 We love to play with tennis balls, Swisher's mouth is too small to hold it so mom puts it in a sock so he can grab onto the sock. We are happy you found a new game Brutus, tennis balls are endless fun.

Brutus, that looked like a blast. I have a tennis ball, but I haven't had much interest until now. I will give it a try.

licks and sniffs, Sasha
p.s. Brutus looks so cute with the tennis ball in his mouth!!

Mom wishes we Scotties would play with a tennis ball - we do - we strip the fuzz off of it in about 2 seconds flat!! Java has lost interest in fetch - he's getting too old - now he's just interested in eating and going for a short walkie.

Brutus!
Watch out with labradorks and tennis balls. They are a bit nutty about them. My dumb brother would chase one until his head exploded.

Is that like some mini-me tennis ball? You did a good job carrying it around, but I bet your mouth is sore from opening so wide.

I like the tennis ball too!!! It's almost to big to fit in my mouth, which daddy finds really funny, but I get it in there. So far I've only chased it in the house. Maybe I need t get the momma to take it outside!!!

Now you need a racket!

You are one tuff little doggy!

Yay for tennis balls Brutus...mom found me a little one the squeaks when I bite it...I love to run after it and pounce on it. Glad you found out how fun they are!
Wags,
Draco

Oh he is TOO CUTE. I love how he is so solid but so... squishable! LOL His little black flat face reminds me of Harley's sometimes.

I LOVE tennis balls and footballs! And I love chasing them until my Mom's arm gets tired! Heehee! It looks like you are having a, well, a ball!

First of all the new layout is so pretty! I love leaves...The are good to chase also.

Tell your momma that Petco has little tennis balls for little doggies...I have....let me count....8....I love them!

Your momma got some cool action shots. Thanks for sharing!

Bilbo also has the little tennis balls and will even chase them sometimes!!

Go Brutus, playing with the ballie is TOO FUN!!

All balls are terrific, but tennis balls are the best! When you get bored chasing and fetching them, you can defuzz 'em!

Oh Brutus, you look like you had a good time with that furry tennis ball! I used to have a dog that loved to play fetch. Of course you'd have to fight to get the ball back from her to throw again, but she seemed to have a good time!

I play my own kind of fetch. I get a ball and make my people chase me around the yard while I cunningly escape from them!

Hi, Brutus!
I have some tennis balls too but they are very big and hard.
I prefer the small and soft ones!
I can see you had lots of fun with yours!
Kisses and hugs
Lorenza

If tennis balls had wings and could fly around the back yerd, maybe then the Britts would be interested. Pupcake says tennis balls are for those who need more to do. Jaeger drops them in the yard for them to get pulverized by the mower. The donks are just plain afraid of them. Now we know what to do with our "hand-me-downs" - excellent regifting opportunity!
Courtney & the Kennedy Clan

I love the photos of Brutus running with the ball in his mouth!

Looks like you ended up having loads of fun, Brutus.

You're such a photogenic little guy. All of the pictures of you are adorable. I can never decide which one I like best!

Freya loves the tennis ball too! She will play catch on her own and will dribble it like a little basket ball player--it's quite cute. Her brother just loves to chew it up to bits though--so we don't get to keep them long.

Too cute! I WISH Marge would play with a ball, but she only does so when she feels like it.