Our Big Earlventure, Part I 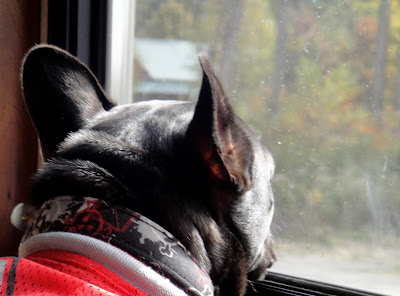 I bet you were all starting to wonder where we had gone!  I planned to do more posting from the road, but despite having mobile internet (the best invention ever!), I somehow managed not to get around to it until now.  As I type we are on our way back home to Ohio, driving through the beautiful fall colors on a fabulous sunny day.  It was our first "big trip", and I have lots to tell - too much for one post.  So here is "Part I" of our Earlventure!
Just in time for our trip, our plates finally came - how appropriate!!  Now the entire country will know what cheeseballs we are! 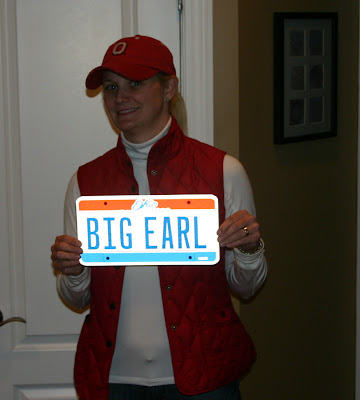 We headed out on Thursday, leaving home in Ohio at around noon.  Shortly after we left it started to rain, yuck.  We were only on the road for about an hour when we had a serious windshield wiper malfunction (the drivers' side, of course).  Thankfully it was an easy fix (the nice mechanic at the TA didn't even charge us), but finding a place & doing the quick repair ate up about an hour and a half of driving time.  We stayed in the coach while they fixed the wiper - here's the lovely view from inside the shop: 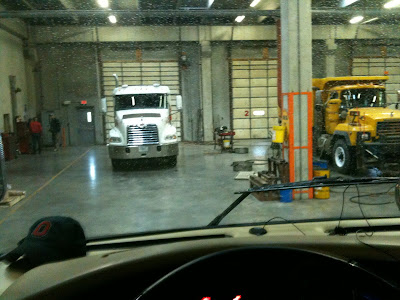 Eventually we made it just past Albany, NY that night.  We had stopped for dinner only to discover that the water pump (that supplies the fresh water inside) had decided to die while we were on the road. Ahhh!!  Since it was already late (almost 10PM), we decided to call it a day and find a place to park Big Earl.
We spent the night parked at Turning Stone - one of the many RV-friendly casinos across the country.  My in-laws (who are traveling with us) enjoyed a night in the casino, while Paul, the dogs & I put out the slides and stayed comfortably in Big Earl in the casino parking lot.  Things started looking up the next morning, which began with a beautiful sunrise.  What we hadn't been able to see in the darkness when we arrived was how beautiful the resort was, including several PGA golf courses and lots of walking trails. 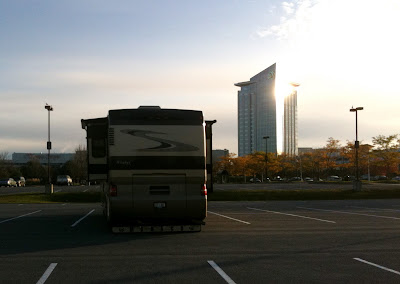 I took the boys out for a nice long, brisk walk before we headed out in order to help drain some energy. 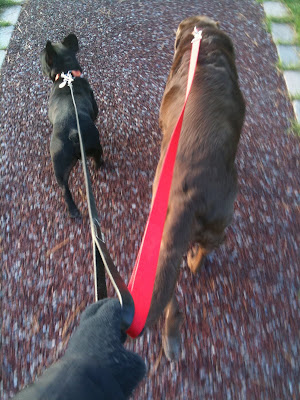 Next stop: Camping World in Amesterdam, NY for a new water pump. They were very accommodating, and got Big Earl in almost as soon as we arrived (we had called ahead). 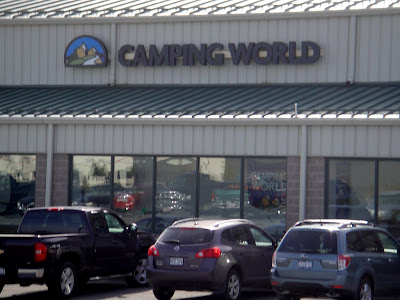 Brutus entertained all the employees, who surprisingly seemed to have an endless supply of Milkbones on hand.  Paul and Mason hit the general store, picked up some supplies while we waited. 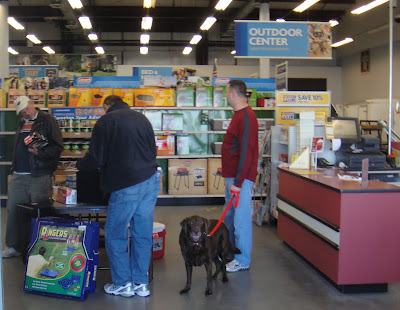 About two hours later, Big Earl was back together and feeling much better (that's him at the far end with the basement compartment open), so we could finally get on with our trip. 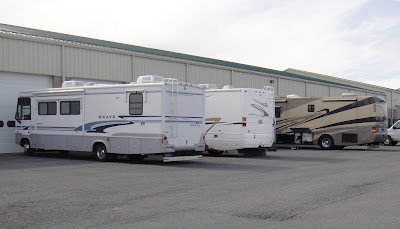 From there we headed through upstate NY, stopping in Lake George to camp for the night. 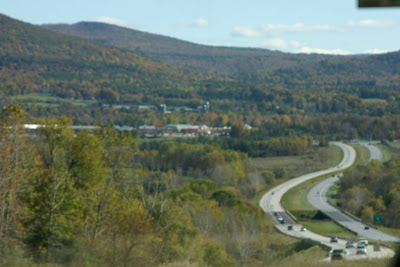 I use the term "camp" lightly (not exactly roughing it), but we actually did stay at a campgrounds.  Here's Big Earl at our assigned site: 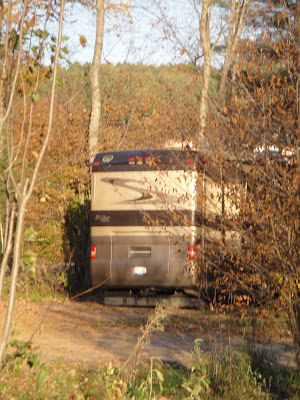 While Paul set up "camp" Brutus, Mason and I headed out for a little hike.... 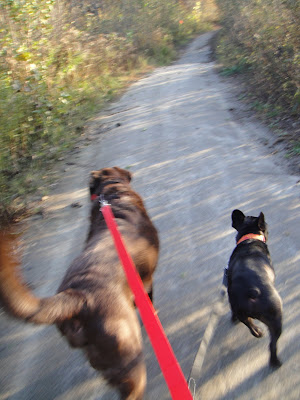 ... and my father-in-law got in some much-anticipated fishing time (although he didn't catch anything). 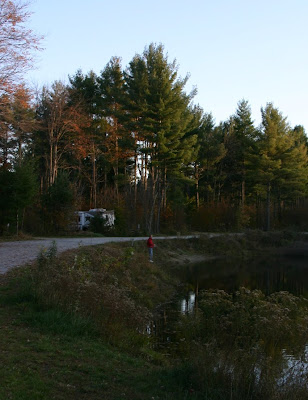 It was a crisp night, and after grilling some dinner, we all spent the rest of the night cozied up in the coach.  The only problem was that with the clear night, the temperatures really dropped; by the next morning our external hose had frozen.   Thankfully the boys creatively solved this problem in about 20 minutes with a hairdryer! 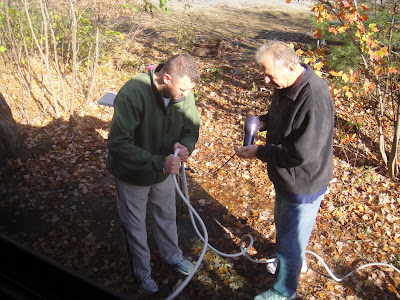 To this point, everyone has travelled well.  Other than getting a little stir-crazy after a long day on the road, the dogs have been great.  They have enjoyed the crisp air, lots of new smells, and some nice walks.  While on the road, Brutus likes to watch the world go by from my lap in the co-captain's chair or from the back of the couch. 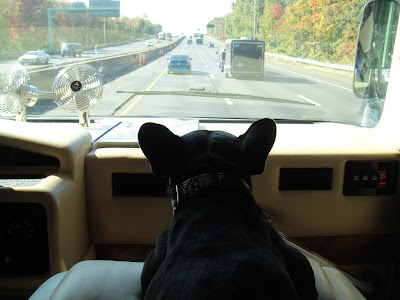 Mason is happy just to hang our by Paul's feet or on the couch, having logged many hours on the road in his younger days (that's my mother-in-law on the left). 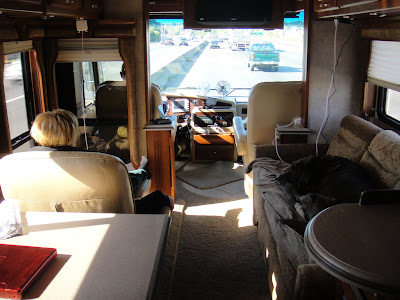 Paul is a road warrior & has driven 95% of the time, confidently piloting us through quite a few crazy situations. 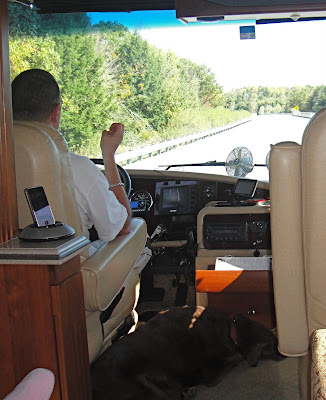 So, Brutus is becoming one well-travelled Frenchie!  Paul says that he can imagine a day in the future when we are traveling to some far-off place in Big Earl, and a total stranger (who has seen our blog) will stop us to ask "Hey, is that Brutus the Frenchie??".  Mason, on the other hand, has made it his personal goal to poop in each state in the U.S. - to date he can check OH, PA, NY, NJ, VT, NH, ME, MA, MI (from a prior trip), and CT off his list (we only missed RI, but after all it is a small state). 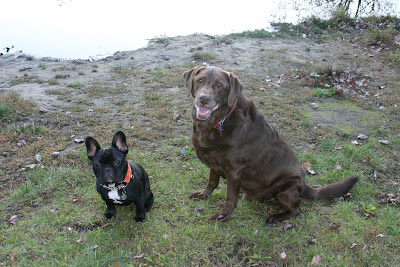 Well, that's it for the first installment.  I'm planning one or two more, depending on how wordy I get. Lots more stories to tell, so stay tuned for Part II of our Big Earlventure: ME & MA
Posted by BRUTUS at 9:21 AM

Your little doggy is sooo cute. I love the icture of him looking out the window.

Looks like you're having fun. We'll be watching for you when we are out on the road. hehehe!!

looks like a great time - we were up in monticello this weekend at our house - you should have come by!!

If you guys ever bring Big Earl through Indiana let us know so we can pet Brutus!!!!

Aren't trips fun?!! I just got back from my first big trip on Sunday too!! ~~Jack

WOW, nice trip. I always wondered what Lake George looked like. I have a lot of friends who go there. Great photos. The camper is really nice! Have fun! Have a safe trip!

Wow, Mason is quite the varied pooper! Go Mason!

It sounds like even though you had some glitches, you were able to get Big Earl some quick fixes.

I can't wait to hear about more adventures. I love camping, so I'm livin vicariously through you guys!

Hey Brut,
Looks pretty neat traveling in Big Earl. Although I must admit that "MY" idea of ruffing it is a nice pet friendly hotel, and the A/C on low!!

Cant wait to hear the rest and we will post our story later tonight.
Wags
Jazzi

Brutus what a great adventure! You do make a handsome co-pilot. We hope you gave Big Earl a pep talk just like you gave Coach. We see you were on the road again. Welcome back
Benny & Lily

Great trip - Lake George must have been so pretty this time of the year. Aside from all the little Big Earl delays, it sounds like a wonderful trip.

Big Earl rocks! What a great way to travel. Momma and Master are most jelly.

P.S. Don't worry about missing your RI poo stop. Its a small state.

What a pawesome time of the year to make the trek!

This was SOOOOOO much better than Flat Brutus tours The West!

What great adventures! Two well-traveled and handsome pooches, for sure!

Oh wow, that looks like a great holiday! I can't wait for the next part. We have never travelled so far and to so many places. You're so lucky, Brutus.

Enjoy and have a safe trip!

Woo-Hoo! Brutus and Mason are almost home! Can't wait to see you both again....we've missed you sooooo much! Glad Big Earl took care of you and your family. Great pix, can't wait for the next installment!

How FUN!!! Looks like everyone is having a blast...we are looking forward to hearing more!!

WOW!!! Glad to hear you got all your malfunctions fixed so quickly.

The pups look comfertable in Big Earl and I love the personalized plates... normaly I don't but yours are great!!

xo martine and the kiddlets

Wow! You've been one busy family! Look like you're enjoying yourselves. Love the pictures from the Lake George campsite. I went there when I was younger.. so pretty up there.

You mean you pooped in CT and didn't stop to see us? We would have been delighted for you to poop in our yard, Mason! Next time!
It sounds like you're having a great vacation despite the minor set-backs.

Wow, it looks like such fun to travel in comfort! That would have helped us tons when we were driving cross country to Arizona last month:D.

Be safe out there!

Albany? Turning Stone in Verona? Amsterdam? You're in our old neck of the woods! Tell everybody I said hi!

Your adventure sounds great! And your camping sounds a lot like ours -- yeah, not exactly roughing it!! (We camp with a microwave, oven, bathroom, TV, DVD player, fridge -- yeah, all the convienences of home!) I'm glad your minor problems turned out to be just that...minor, and that the pups have enjoyed their travels.

Aww looks wonderful.
And i love the pooping goal hahaha

What an adventure Brutus. Mason is very handsome, I don't think I have seen a picture of him very often. It is nice that you shared for this post. Looking forward to your next story

Hi Brutus, That is a super vacation you had in Big Earl. The pic. of you being the NAVIGATOR is precious. I'm with Mason. Poop in every state. Grreat fun.

Wow, lots of unplanned stops. Yuck. I hate when that happens! Tell your Mom not to feel too cheesy - Mom and Dad and my Uncle Charlie refer to the House With Wheels as the Starship Enterprise, and yes, our license plate says "ENTRPRZ". So we are cheesy AND nerdy. So I think we've got you beat!

And I'm jealous at all of the states that you have been to! I don't think I've been to as many as you, although our states are bigger here.... I've been to Idaho, Wyoming, Nebraska, Colorado, Kansas, California, and Arizona. So you've got me beat by quite a bit!

Looks like a great trip! But then, any trip in a House With Wheels is good, right?!?