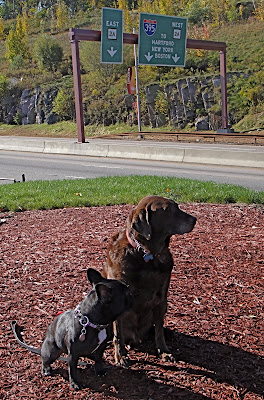 I don't usually post on Saturdays, but I'm SO far behind I'll never catch up if I don't plow ahead!  In our third and final post of the Earlventure, we spend another day in MA, then head home thought CT, NJ, and PA.
Sunday turned out to be a really crummy day in the weather department!  We started off in the rain, and toured the Cambridge area without ever leaving the warm & dry interior of Big Earl. We actually drove through Harvard and MIT campuses (an impressive feat in a 40-ft coach!), just took some pictures through the window! 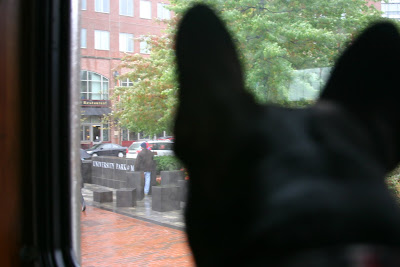 Brutus getting a taste of the Ivy Leauge. 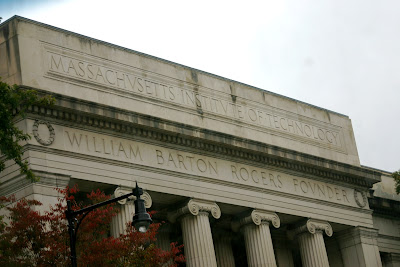 The stoic buildings of MIT

That's the Harvard crew having a meet out there!  Brrrrrr!!!
Although it hardly seemed possible, the weather took a turn for the worse as we approached the Foxborough area.  If anyone saw the footage from the Patriots game last Sunday, we drove past Gillete stadium during the game - it was snowing/sleeting at an alarming rate!! 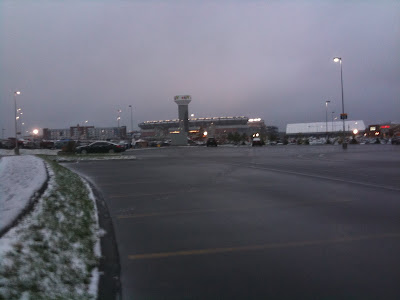 The prematurely frozen landscape outside Gillete stadium!
Thankfully as we drove south out of MA, we left that miserable weather behind us.  We concluded our trip the way we started it, camping in casino parking lots!  Another late arrival to our resting place at Mohigan Sun in Uncasville, CT.  We were once again pleasantly surprised the next morning to find what a scenic view we had!  Thankfully the weather was beautiful, so I took the opportunity to catch up on my picture-taking! 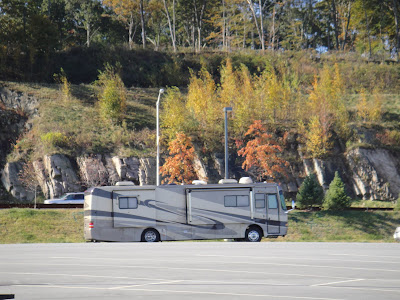 Big Earl camped out in the RV lot.  We were surprised how many other rigs were there! 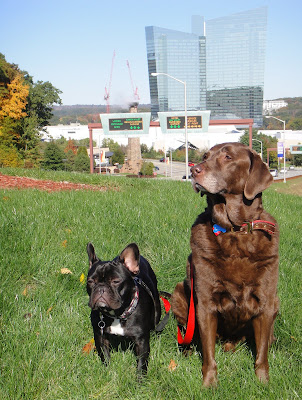 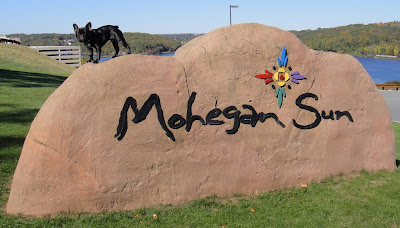 Part Frenchie, part mountain goat!  Wonder if Mohegan Sun needs a spokesdog?
After a half-day of exploring this really neat resort (it's beautiful inside), we made the short drive over to Foxwoods casino.  That is where we spent our final night before heading home the next morning.  Two nights in the casino for my in-laws, a nice dinner, and a good-nights sleep for us! 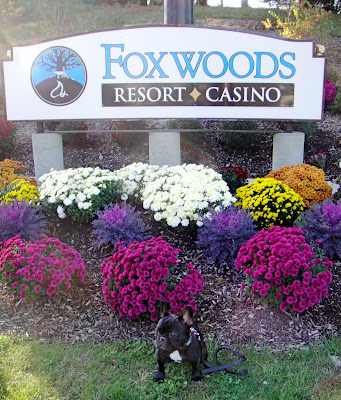 We had another nice day for the drive home, the warmest and sunniest of all the days on the road. Everyone was tired and ready to get back to Ohio, so it was a quiet trip home - other than Brutus' snoring!  He found a few new places to nap in: 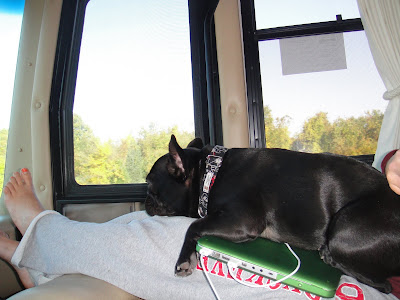 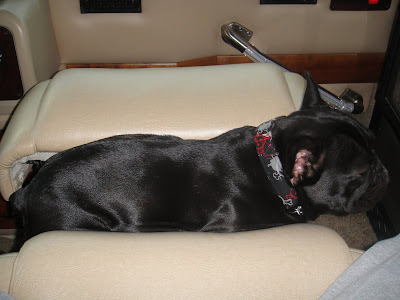 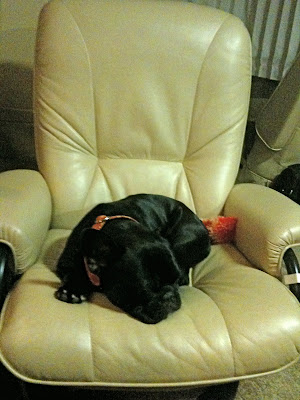 ... and in yet another chair!
After the l-o-n-g treck across 1-80 through PA, we arrived back home safe & sound. Big Earl was happy to be able to finally rest in our driveway.  He logged almost 1800 miles on this trip! 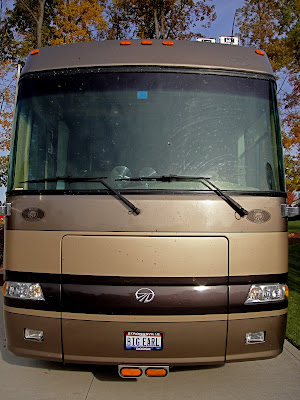 The only problem we ran into (literally) on the way home were thousands of flying insects!  Look at the windshield! 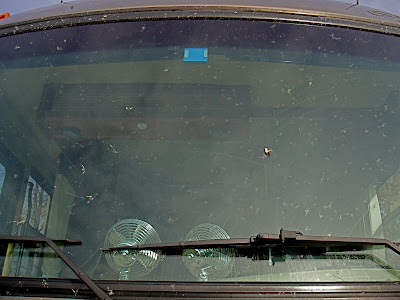 Here's a close-up in case you can't see it well enough in the first picture!
So I'd say the coach is officially "broken in"!  Some of you have asked if Big Earl is done for the season.  He actually has one more outing: a trip back into PA for the Penn State-OSU game. Then it's hibernation time until next spring.  We have BIG plans for him next summer, namely a month-long trip West across the plains, then up to Alaska!  Big Earl better rest up!!
Hope you all enjoyed my recap of our adventure.  Next week I'll post more contest entries, as well as some fun fall photos and some other more mundane things (compared to all the adventure from last week!).
Good luck to everyone's teams, be they college or professional. OSU is up against Minnesota, and we're almost afraid to watch after last weekend's debacle!  Oh, well - for whatever it's worth......  GO BUCKEYES!!!!!
Posted by BRUTUS at 12:54 AM

Brutus
You sure are a well traveled frenchie for a little guy. We were shocked, we thought you grew a long tail, but we realized it was your leash. Whew! Thats for the great photos. You look like a king in the leather chair.
nite-nite-
Benny & Lily

You sure have lots of great adventures in Big Earl. We used to goed on Big adventures now we goed on little ones.

I, Bobo, love to ride. Meja on the other hand doesn't like it so much after our big accident.

You folks sure did have quite an adventure! And Big Earl did a great job. I like Brutus's selection of resting places -- especially on the laptop! Heeeee!

We just love your Earlventure! What fun you have travelling in Big Earl!! And we love all your pictures too!

That was fun, Mommy really liked that. I am sorry you had some problems and bad weather but it seemed like a good time all in all. Good luck to your acorns this weekend, Wisconsin is idle until we play Purdue next week.

hello brutus its dennis the vizsla dog hay i thawte mit wuz suppozd to be ful of smart peepul but luk they yoozd a v insted of a yoo in there etching their!!! i gess they didnt hav spel chek bak then or maybe it wuz too hard to go bak and chip owt a yoo ha ha ok bye

You guys have been having such great fun. You better keep up with the blogging in time for your trip to Alaska - I would LOVE to read all about that next year!

Yikes! You drove Big Earl around Cambridge? That is most brave for sure. Sorry you had such crappy weather for visiting my state. Maybe next year...

Wow Brutus, you such do get around! Sounds like a great trip. Are you happy to be home or are you a gypsy at heart?
Your pal,
Sedona

Hi Brutus, I wish I could have gone with you. What fun. Love the Mountain Rock shot.

I need some YELP. There seems to be something really wrong with my blog. I have not been able to post for TWO mornings. When I go there all I see is a BLACK SCREEN. Do you have any idea what might be wrong with my blog???
I can get into everybuddy eles' blogs so you can leave me a note here with your YELPFUL advice.

That was a pawesome road trip! Thanks for sharing your adventure with us. Mom wishes she had a Big Earl but then she'd also need someone to drive it for her! BOL

Brutus we can't believe you get to go to Alaska next year! Is there room in Big Earl for one miniature schnauzer?

Just catching up with your blog...what fun!! Brings back a ton of memories from when I lived in CT (went to Foxwoods, mohegan, etc) and andy lived in Boston. What a great part of the country!!

WOW !!! Brutus,
You sure covered alot and saw alot of places. What fun!!

It was cute, all the places that you found to sleep!! lol

Glad that you are home safe and sound

Great trip. There isn't much worse than a rainy cold day in the Boston area - it cuts right to the bones. But Mohegan Sun and Foxwoods are right up the Momster's alley - she and Dad used to go there often when they lived in CT. It really is beautiful inside even if their luck in the casinos was really bad.

Thanks for sharing your trip with Big Earl.

Love the pic of Brutus on top of the laptop. Hope you didn't need to use it for anything!

Mom is just now catching us up on reading bloggies we loved reading all about your earlventure. Looks like you had lots of fun and you are such a good boy posing for pictures.

You were in my neck of the woods! The weather was lousy on Saturday but I was in PA on Saturday! Nice photo's, glad you had a nice trip!

Thanks for letting us come with you on the Big Earl! Great trip!

Mohegan Sun is about 45 minutes from us, Brutus! You were so close! Next time!
What an adventure you had!