What a great weekend!  Our beautiful weather continued, so Brutus had lots of good walkie time, and got to play outside with all his buddies at the Funny Farm.  Ohio State not only won their game, but locked in a BCS bowl game.  It might be late fall, but everything is coming up Roses in Ohio!!

What could be better???  Thought you'd never ask....
We are ready to announce the winner for Brutus' "That's Ridiculous" contest!!!! 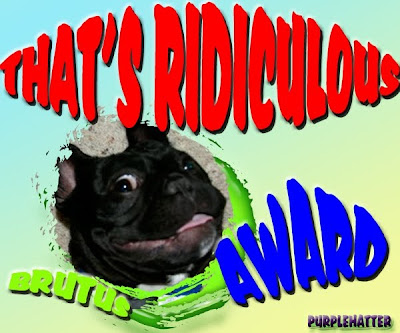 My husband, Paul, poured over the entries last week, even visiting blogs to see some more background on his favorites.  There were many great entries, but after much deliberation, one stood out in it's level of ridiculousness!
And the winner is (drumroll, please): 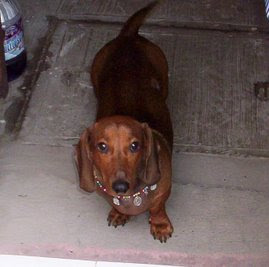 LORENZA
Those who know this most fashionable dauschund from Mexico might think she won based on the fact that she must have 50 dresses made by her grandma.  That might win her a modeling contract, but it was her mom's sacrifice for Lorenza that Paul felt took things to a whole new level.  Her mom actually cut off her long locks because the hairdryer used to style them stressed poor Lorenza out!  Wow!  Some might say it's ridiculous, some might call it devotion, but we say it's prize-worthy!!
As her prize, Brutus and I are commissioning a drawing of Lorenza by the fantastic Lili Chin. Those of you who have followed for a while may remember her work when I posted it during Brutus' birthday week.  Others of you have met Flat Brutus, who is the slightly more 3-D version of that drawing.  For those of you who haven't seen Lili's work, here is what she did for Brutus (click here to see more of her drawings): 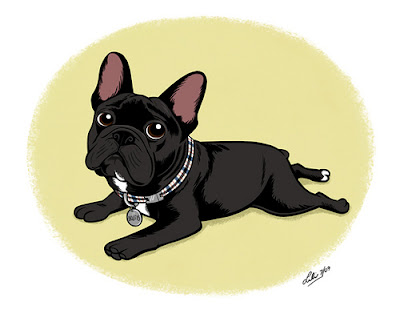 Lili also donates a portion of each drawing to a dog rescue group of your choice, so it is not only Lorenza who is winning here!  Several of our other blogging buddies have also commissioned her work, so I plan to do a post featuring those pieces, including the completed one of Lorenza.
Brutus and I want to say a BIG thank you to everyone who played!  It was so fun to host this contest, and we have a new appreciation to all you who have done the same.  Next time I hope to be better organized, seeing as a few of you had to remind me of your entries (sorry!).  But posting the pictures, sharing your stories, and linking to everyone's blogs did more than just make for a fun contest - we met several new friends who stopped by for the first time!  Our blog would be nothing without all you who follow it, so again we say THANK YOU!!! 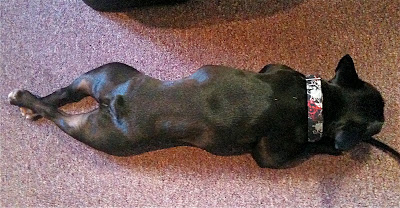 Well, all this excitement has completely exhausted The Brute!  Time to go recover from the weekend (look at that body outline - yowza)!
Posted by BRUTUS at 8:12 PM

Lorenza and her mom definitely deserved that win. That is QUITE a sacrifice!

Maybe this will make Lorenza's mom feel a little better too, as last I heard she'd been battling kidney stones.

Wow, the winner is definately prize-worthy! And what a prize it is- too cool!
(And yayyy buckeyes!!)

That IS a pretty drastic change and it definitely deserves a prize.

But which one of her 5000 dresses would she be depicted in?

That was an inkhredible sakhrifice her mom made fur her!

What a pawesome khontest AND prize!

How did your dad ever pick a winner? So many were deserving! Congratulations to Lorenza - I'm sure she'll have just the right outfit to wear for her acceptance speech!

Hooray for the Buckeyes!

Come back to play at our Funny Farm very soon...we always love to see you!

Haaaaa!
This is the first time my mom feels proud to be sooooo ridiculous!
Thanks a lot!
It was great to participate and the prize is... is.... just the best!
Thanks again!
Kisses and hugs
Lorenza

A deserving WINNER and a most excellent prize for lots more to WIN! Very thoughtful Brutus my boy!
~wags-n-wiggles~
wild dingo

YEAH!! We totally have to agree with you - Lorenza should win; hands down!!

Hooray for Lorenza! Of course her mom would do ANYTHING for her. She is such a sweet little princess.

Brutus, Please thank your dad for is VERY WISE CHOICE!!! I can't believe what a wonderful prize you chose for Lorenza and her totally devoted mom. That is such a thoughtful and generous prize. I can't wait to see it when it is finished.
LOVED your "tired" photo.
Glad that your Buckeye Boys are Bowl Bound.
Maybe Big Earl will take you out there... to see the parade and the big game.

Brutus, Lorenzo sounds like a great choice...It must have been hard for your Dad to pick from all the wonderful dogs out there!
Have a great day!!!

Fantastic choice!!!! We love Lorenza and her Mom could use some cheering up right now as she is suffering from a nasty kidney stone. Knowing how important her hair is to our Mom, we understand what a sacrifice it must have been for Lorenza's mom. Congrats to sweet Lorenza and her Mom.

WAY TO GO LORENZA!!! I bet this will make her mom also feel better after her visit to the ER! That is such an amazing prize!!!!!

Congrats to Lorenza and her mom!!! That last picture of Brutus is so precious, we love how his back legs are crossed.

Congratulations to Lorenza. That must have been so hard to choose a winner, but Lorenza's was really special. It was so nice of you to have this contest.

p.s. We beat Michigan and congratulations to you!!! Are you taking Big Earl to Pasadena??

Congratulations to Lorenza! What a nice prize!
Congrats also to your Buckeyes, Brutus!

Congrats to Lorenza! She had some tough competition. Thanks for hosting a terrific contest.

CONGRATS Lorenza,
there were alot of good stories and she deserved to win. That was a crazy story.

You sure looked pooped there Brutus, hope you are all rested up

Yeah! We luv Lorenza and she deserves to win!

This was a fun contest and thank you for letting us be a part of it.

Congrats to Lorenza!! Her Mom is the tops :) We love that last pic of you!

Lorenza is a well deserving winner! And we really look a lot alike, Brutus! Apart from the tail and earst that picture could be me ;)

So cool! We love the winner and we LOVE Brutus' sexy little buns and chicken drummie legs in his reclining pose! You rock!!!!

What a great contest!! Way to go Lorenza!!!

Yay! Congrats to Lorenza. We totally think she deserved to win. We can't wait to see Lili Chin's picture of her. We are sorry we couldn't participate but Mom couldn't think of anything aside from keeping us warm during the day with a lava buns heated up in the microwave (which was sorta like another entry). But we hope we can pawticipate in the next one!

So glad Lorenza won! Hard to top her human's devotion, huh?! Great prize choice, too...can't wait to see the cartoon version of her!
Your pal,
Sedona