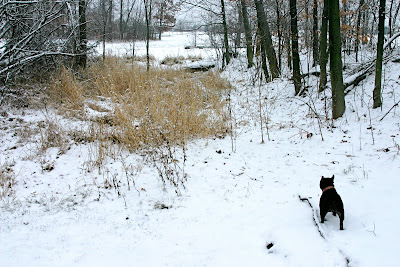 It finally happened!  While most of the eastern part of the country was complaining about digging out from a big blizzard, I sat here in the "snow belt" and complained about our lack of snow.  The storm stayed too far south to blast us, but we had enough accumulation from light flurries in the last 36 hours to give us a nice fluffy blanket of the white stuff (first time there's been enough to cover the grass this season). NOW it's beginning to look a little more like Christmas!!
Don't know that the boys were as excited as I was to see the snow, but we headed out to play nonetheless.  Brutus was still itty-bitty last year when the first flakes flew, and I'm not sure he remembers what it's all about.  So today's post it about two firsts - Brutus' first time ever in the snow last year, and his "first time ever" (as far as he is concerned) in the snow this year!  As much as he's changed (no more curling earls, now we have pink lips - think they are getting better, though) so much has stayed the same. Some of the pictures look very similar between this year and last - if you get confused, Brutus had on a green collar last year, this year's is more red!! 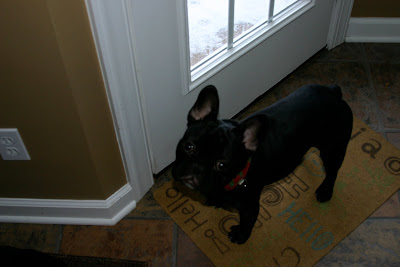 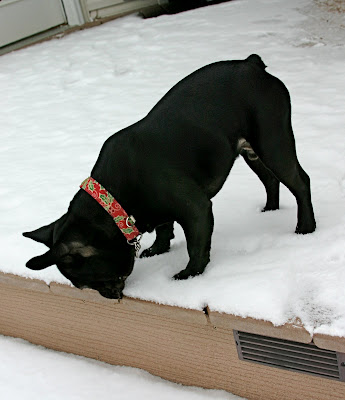 Hmmmm.  Don't know if I want to venture off the deck. 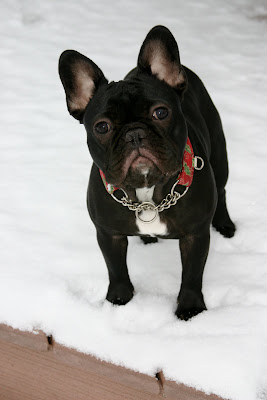 You said I did last year?  Got pictures to prove it? 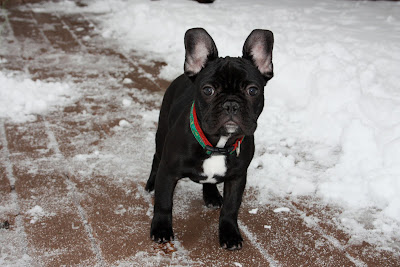 Yikes!  You made me go out into this stuff as a puppy?  How cruel! 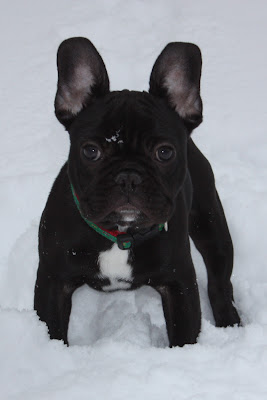 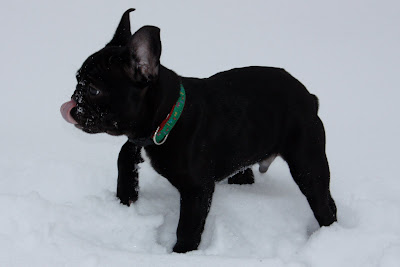 Do you hafta post this one, mom?  That ear curl is so embarrassing... 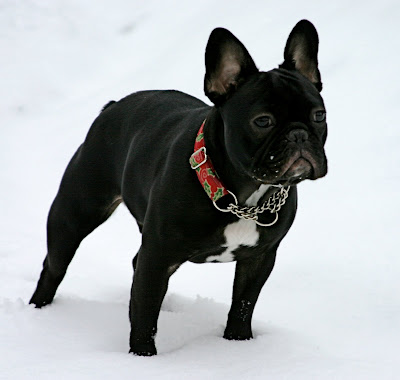 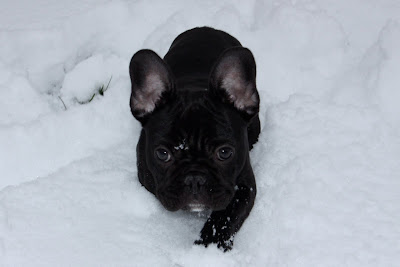 At least I'm not buried up to my elbows like I was last year!! 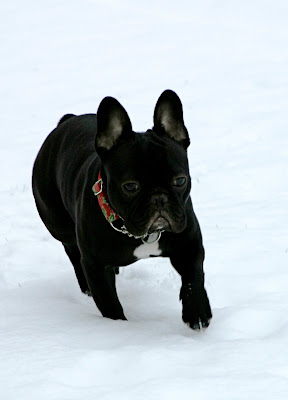 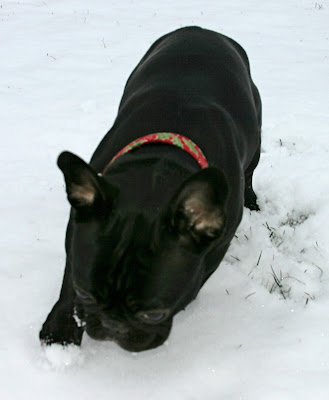 Hey, at least it's edible! 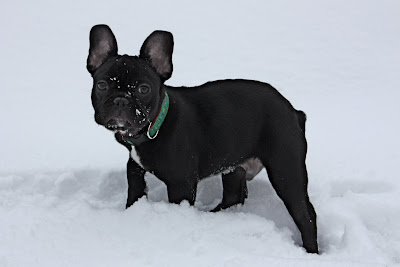 My photo posing has come a long way - much more distinguished-looking now!! 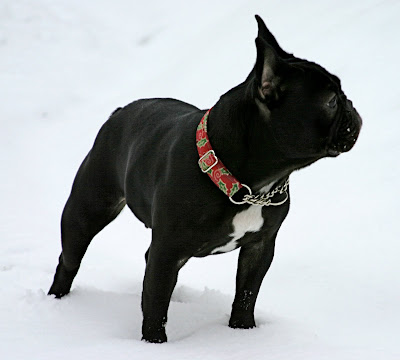 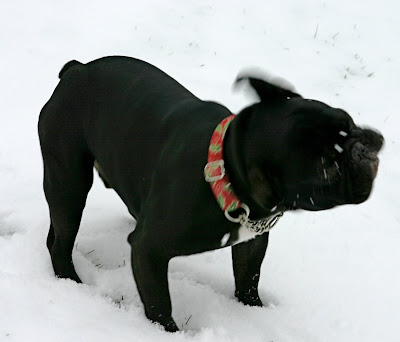 Look, Mango & Dexter - I can even do blurry face!! 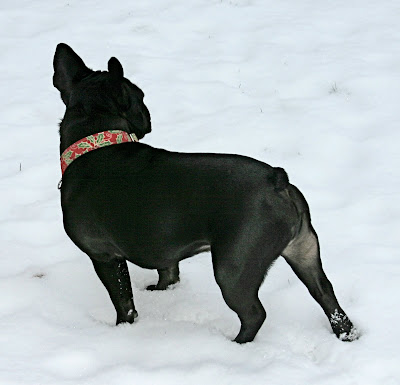 Can't we go inside?  I'm freezing my tail off here (and that's hard to do when all you have is a nubbin!!) 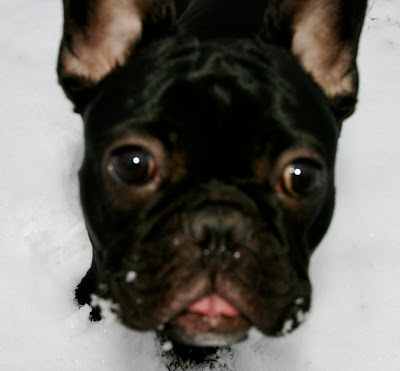 Maybe if I stick out my tongue at the camera she'll get it - I'm done!!!
Hope you are cozy, warm & safe after that winter storm!  At least we'll have a white Christmas after all!!
Posted by BRUTUS at 9:33 AM

We got about half the snow you did here in Indy. We are kind of jealous of the snowed in peoples... their doggies get to STAY HOME WITH THEM!!! Glad you were able to braves the snow for a little while! :)

woo snow! this will make you appreciate snuggling even more!

Brutus, just when I thought you couldn't get any more handsome! You look positively modelesque against the snowy background.

I'm gonna make my mom have a talk with your mom about making you walk in the snow and gettin cold. I'll come right over to snuggle up and keep you warm... :)

I noticed your ears are significantly smaller than bratty Betty's. Hmmm, maybe she'll use hers to fly south for the winter.

Brutus, those are some great pics of you in the snow! We don't care to go out in the white stuff either - too cold on the toes.

My oh my how you've grown in the past year Brutus!!! The snow looks fun until it gets cold I'm sure!!

PS: Your Christmas card is great... especially the photo insert!!!!

Teehee! Why is it that our parents always drag out baby pictures at times like these? I mean, Mom showed me a picture of some ball of fluff lying in the snow up to her nose and said it was me. Uh-huh. Sure, Mom. I don't know how you could stand the snow, what with your short coat and all; I'd think you'd get cold pretty quick!

Hi, Brutus!
The pictures of your two "firsts" are pawesome!
But... I have to say that looks too cold for me!
Kisses and hugs
Lorenza

You looked so cute for both of your firsts!! You really stand out in all that snow!!

I LOVE your Christmas collars too!!

You sure look great against the snow!

Good snow shots of him! Yeah, enjoy it while it lasts...I hear we are supposed to have 80% chance of rain Christmas day. Figures.

We got less snow than you did - in fact, we got ZERO snow. Brutus, you looks so good against the snow white of the snow. Great pics.

Yes Brutus,
you look very sharp in the snow, It looks good with our black colors. Have fun with it, run, hop and sniff it and you will be zippin around in not time.

I see your mom made you go out and "play" in the snow too. What is up with these hoomans? I keep telling my mom I'll just stay inside til the spring thaw.

It's a good thing you stand out from the snow! Otherwise you could get lost inside all that white stuff!

Enjoy the snow, Brutus! I don't even have the chance to see any snow where I am.

DUDE! That is what happens when you start to freeze. You get blurry face. You poor thing. Is your nubbin OK?

Brutus what grea snow pictures. We loved following you on your adventure. We thought you were going to lay down and make a snow dog...BOL
Benny & Lily
Ps. and where is your coat?

Those pictures are so cute! I like the trotting one where he's showing his better clearance. So handsome!

Great snow pictures Brutus!! I kinda hope I don't ever have to have "snow pictures" taken...It looks wet AND cold!!

Yeah, black dogs look awesome up against the snow - this post proves it!

I like seeing then and now pictures, too. He sure has matured since his last experiences with snow!

You look fabulous against that white snow - you are so buff and muscular!! (the girls are giggling nervously)

We're so glad that you enjoyed your first snow. Moms had to work, when we got ours, so no playing for us. Boooo! Send some our way!