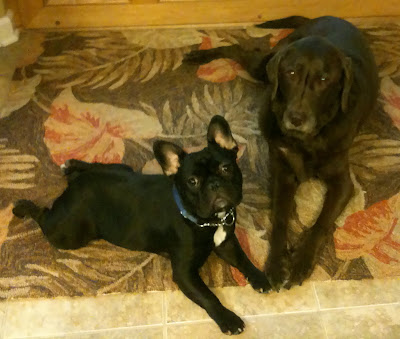 Is it Thursday already?
Yikes, we're so far behind.... Many things I've been meaning to post, so today's blog is part of a general catch-up in attempt to get back on track!! 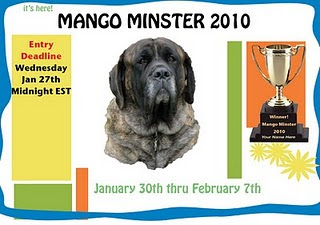 First order of business, Mango Minster entries. I have Mason's entry ready, and - as suggested by the honorable RH himself - an honorary post-humous entry (although not being judged) for Duncan. I'm still waiting on files of a photo to use for Brutus, so his entry will be in a separate post.
MASON: Sporty Dog Entry
Despite technically being a "sporting" dog by AKC classification, Mason is more of a homebody. Labs are supposed to be water dogs, but Mason never got that memo; you can't hardly push him out the door if there is as much as a spotty drizzle going on. Mason has never done any actual "sporting" (unless you count being an avid Couch Potato as a legitimate sport activity), but is entering this category since he is the embodiment of the consummate good sport about life. In his nearly-12 years, he's taken everything in stride - several surgeries, multiple relocations, some unusual attempts at grooming (we used to shave him to cut down on the fur-tumbleweeds that are produced from the shedding of his undercoat), and even the addition of two packmates (after having been an only child for his first 8 years). Mason is always a good sport in playing with Brutus, letting him hang of his lips & ears, and bite his ankles (all in good fun) in never-ending games of bitey-face.
Moreover, Mason has never held a grudge against me for making a fool of him (to my husband Paul's chagrin). Even before my blogging started, I couldn't resist photo ops of Mason in silly/compromised positions. He's worn various apparel and accessories, having been adorned with everything from St. Patty's day hats, to antlers and pink bunny ears. For his entry, we picked out the most recent embarrassing moment, a batty headband from last Halloween. I like this one because although he sat patiently as I snapped away, you can see the look of boderline disgust on his face. I love the one raised eyebrow! Mason, all I can say is you are DEFINITELY a good sport for putting up with all the torment from me & your little brother Brutus. Thanks for being such a great dog (or as Paul says - The Best Dog Ever)!! 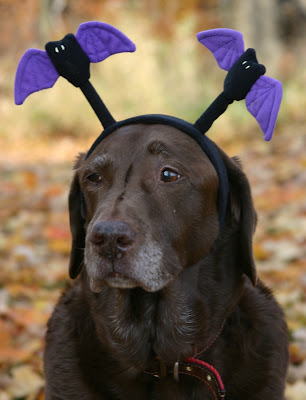 "Seriously??"
DUNCAN: CDIT Division (FEO Entry)
Onto my other "entry". I've picked up a bunch of followers since last fall when my old JR terrier Duncan crossed the rainbow bridge after nearly 17 years with me (to read more about Duncan, check out the memorial post I did for him back in September). Since post-humous entries are not within the contest guidelines, Mango suggested I do a FEO entry (as we say in agility, For Exibtion Only - what it's called when you run just for the experience, not to be judged) as a sort of tribute/reminder of Duncan. This picture is just too perfect, so I couldn't resist. Here is one of Duncan's "finer" moments, which would have been perfect for the CDIT (Cracker Dog Insane Terrier) Division: 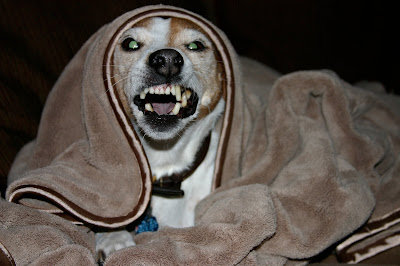 In Duncan's defense, this photo caught him mid-yawn, my flash waking him from a snooze he had been taking. Like many of our older canine pals, Duncan was a bit of a grump in his old age (he couldn't hear, and I don't think he could see all that well either), and did have quite a reputation for snarkyness. Still he managed to tolerate the addition of a high-energy French bulldog puppy during the twilight of his days, that having already adapted to living with Mason in a new home as a senior citizen (he had been my mom's dog, spoiled beyond belief). So for those of you who never met Duncan, here is a photo of him from a warmer-fuzzier moment. It was taken only a few weeks before he crossed the Rainbow Bridge just weeks before his 17th birthday. We miss you, buddy!! 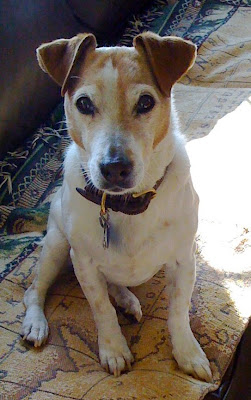 Think there is still room for one more item in this post, and far be it from me to NOT include something about Brutus (it's what you are all coming here for, after all). 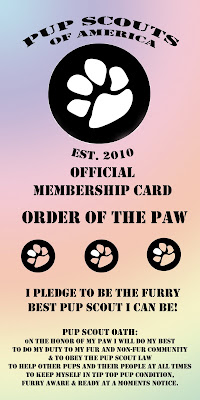 My apologies to Martine and the kiddlets (Captain & Candy) for not getting this posted sooner, but here is Brutus officially taking his Pup Scout Oath (click the badge above to biggify and see the oath, or visit Martine's blog, I Need a Sugar Fix, to find out more). 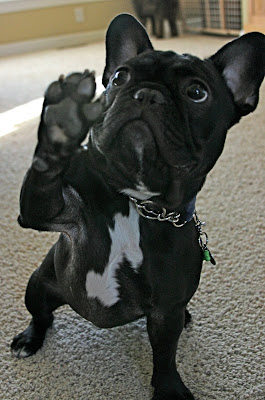 I'm really going to have to work to hold Brutus to the vows he took (he tends to be an "It's all about me" kinda guy), but it'll be good for him!! Now I just need to find him a sash and pup scout hat... Or get a lot more proficient at using Photoshop.... 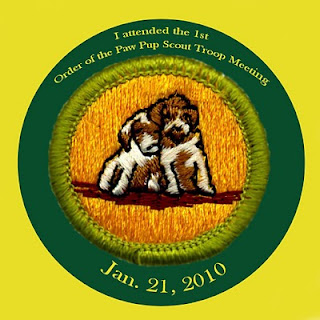 Those are some GREAT Mango Minster entries! We gotta get ours together!

Awesome entries - that's a nice way to honor Duncan, too. This is our first year of Mango Minster, and the competition looks TOUGH!!

PS. I'll look forward to your agility vids whenever you have them!! I've been busy, too - don't worry! :)

What a great entry for Mason! Good sport indeed. I do love the raised eyebrow. Amazing how expressive their faces can be. Moose understands being not so sporty. Moose can be a little sporty in bursts but he missed a memo about retrieving so knows you can't be faulted for missed memos.
Lovely post about Duncan too. That will be a great CDIT photo. FEO is a great idea! That is the fun part anyway.
Congrats on pupscout Brutus!

That's gonna be some stiff competition for sure in the Mango Mister contest. I think I'm going to hold my own contest and people can only enter photos of Brutus. That way I'll have a bunch to hang above my bed...

Go Brutus Mama...so much info...so little time!! You did pawsome!!

Your Mango Minster entries are so great....and being a pup scout is fantastic isn't it???

I'm terrified after seeing your entries. Momma sent mine in a looong time ago, and I haven't even seen it yet. I must say that Mason's photo stands out, and I'm in the same category, yikes! Dog help me!
Twink!

Brutus, how did you hold that paw right up there? I wouldnt do it so just have paws on the ground!!

Good job on the MM entries - good luck. Love that pic of Brutus doing his pledge:)

those are some great entries!

Mom is giving away to many secrets. Humans always getting a kick out of telling stuff. You are a real serious pup scout we see. BOL
Snuggles
Benny & Lily

Terrific entries. I love Mason's photo and Duncan looks like a wonderful boy. I'm not sure if you are really taking the oath in that photo, Brutus. I think you might be telling someone to hush!
Snuggles,
Twix

I loved hearing about your JRT. He was so cute!

OMD you are sooooo cute. Who are all these other pooches. You have like a pack of multi-breed dogs! Cool.
Smooches,
BabyRD and Hootie

We just read and watched your post on PawZ. Very funny and useful indeed. I might have to take you on as a fellow Consumer Reporter. That was a good, thorough review!
Smooches,
BabyRocketDog

awww, those are lovely tributes to mason and duncan. i will have to get my write up on the old bloggy soon. and brutus taking his oath is just too cute!
hugs,
puglette
:o)

OM Dawg! Duncan is a DOLL. Loki and Juno are my first official dogs, tho Maggie (my dingo) became my dog when i married mr. wild dingo, she wasn't officially adopted by me. Still, i knew nothing about dogs until Loki and Juno. 2 entirely opposite dogs. and I've learned something about myself. i LOVE cracker insane dogs. (both of mine are slightly cracker insane in their own ways but one is REALLY craker insane.) and because of that, I've had in the back of my mind that some day i will own a JRT. A trainer once told me that JRT's cannot be owned by dumb people so you must be one SMART cookie to have had a lovely one like him for so long! He certainly was a looker too!

What great entries! We have someone in common, Mason. We're both close to being 12 and we both got younger sibs when we were 8! That's pretty cool!

Great entries. We have to get Mom on the ball if we are entering.

Mason! I can't believe we left before you got there! We will be continuing south later this week so meet us at the 7 mile bridge and we will make up for it! There are soooo many sporty dogs and some of them are quite fleet of foot so it is hard to get a good head count!
Is Brutus gonna enter as a sporty dog? I did not see his entry yet? Maybe he is in another category? Herding perhaps because of his mastery of agilities?
Anyway, see you when I get back from Flyball, K?
Moose