The Tale of the Teeter: I'm SO Board (Bored?) 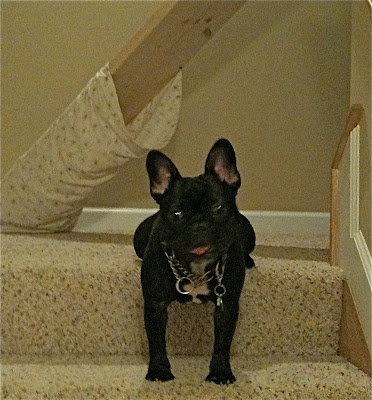 Anyone who follows Brutus' facebook page already knows that we've been working on a project here. I have a nice little agility course in my basement, where Brutus and I practice between lessons, or retreat to when the summer temperatures are too warm to train outside. I already had made several jumps, as well as several other common agility obstacles: tunnels, a pause table, a tire (it's actually a hula-hoop hanging from the rafters) and a chute (a short tunnel with a collapsed fabric sleeve at the end). Not a bad set-up for a basement!!
As we are starting to move up to the next competition level, there some new obstacles we now need to learn that were not required in the most novice courses. Brutus was really not a natural on the weave poles, and I was lucky to find a bargain on a competition-quality set of those to add to my little course. The other new obstacle is the teeter-totter, which is basically a see-saw the dog runs across to tip. He learned the basics of the teeter easy enough, but we'd gotten to a point where I felt I needed to practice it more to have his teeter good enough in competition.
PVC pipe is a do-it-home agility builder's friend, and I finally found a reasonable pre-cut base (with minimal assembly required) so that I could add the teeter to my at-home training. The base arrived in the mail late last week, so I all needed was a 12-foot long board to use for the top. Easy-peasy, right??
So good ol' Courtney (who had bravely volunteered to help) and I headed out to the local big-box hardware store on Saturday. Two blondes walking around in Home Depot buying construction materials and PVC. Talk about sticking out like sore thumbs....
We navigated the store uneventfully, picking up our parts, some paint, and the board - at least until the HD employees assumed we were nuts/helpless. Like two ladies might bring down the whole store if we did things ourselves.... really! This guy came running when he saw us getting down our own lumber: 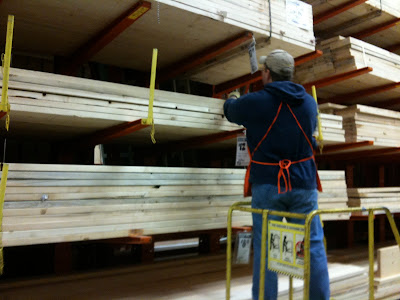 After graciously turning down over-zealous help from more than one other HD employee, we headed out to Courntey's car with the supplies. The board fit, but barely - we had it all the way to the front windshield as it took up the entire interior length of the truck! Here's the view to my left: 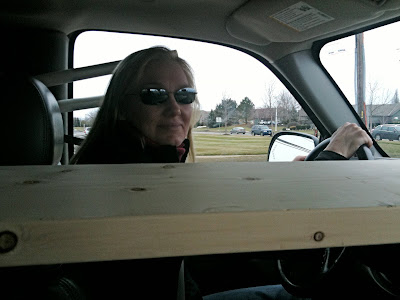 And looking into the back of the truck. Sadie Lou (who came along for moral support) was not happy to lose her usual spot to a hunk of lumber. 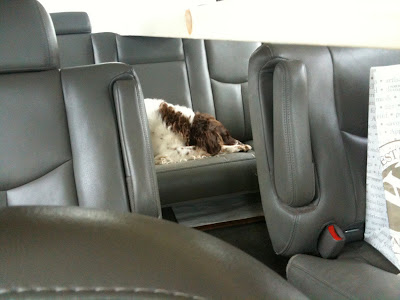 Once we made it back to my house with the goods, the next problem was getting the board down into the basement. My stairs have a tight turn in the middle, but we thought we could finagle/finesse it around. 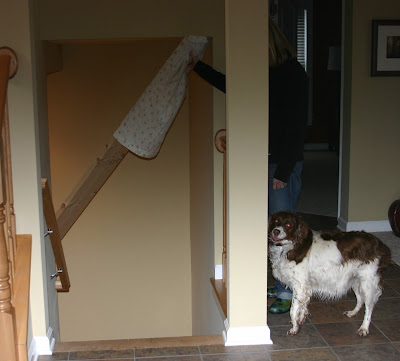 Courtney & Sadie Lou worked the turn from the top end of the stairs... 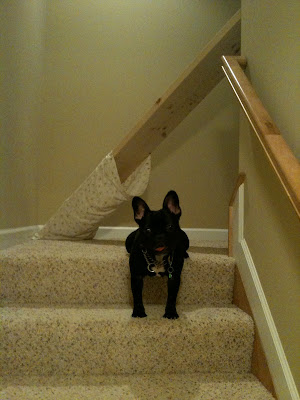 ...while Brutus kept an eye out for trouble down around the corner at the bottom end. Hey, Brutus! You're looking the wrong way - you're supposed be be watching the board!!
Unfortunately, it was (literally) an inch too long to fit. Just look at where the ends are in the two photos above - so close and yet so far from making it around the corner. Grrrrr..... The plans called for a 12 foot length, so we didn't want to cut it. Now what??
Suddenly I remembered that there are some small vents within the glass block of our basement windows. 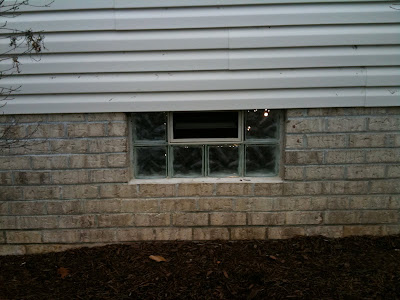 Maybe the board is small enough in cross-section to fit through one of these teeny windows... So back outside we went with the lumber. 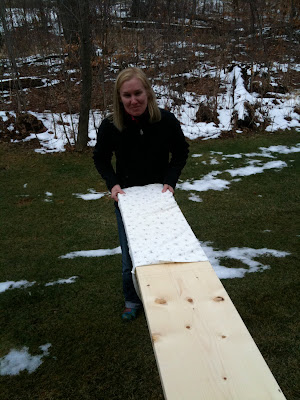 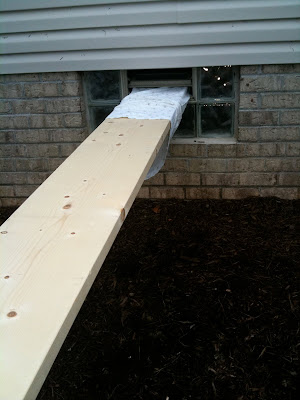 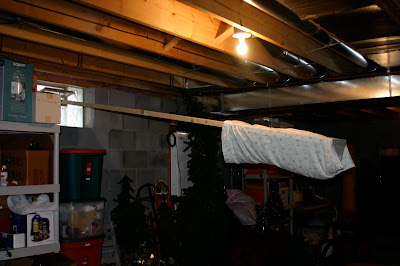 WooHoo!!! Cause for celebrations both the inside 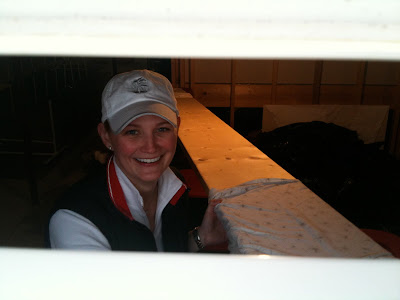 .. and from the outside! 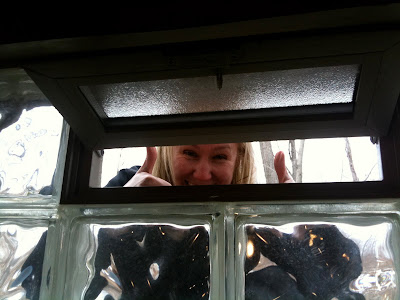 Hooray for small victories!! It didn't look like much like a teeter yet (at least not to Brutus)... 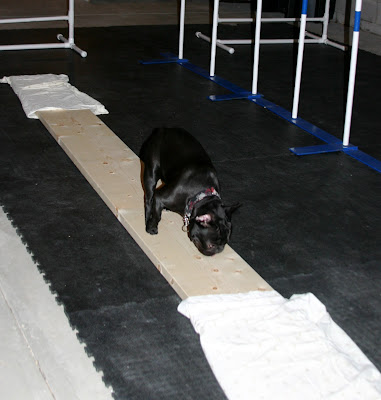 ... but at least now we could finally get on with the construction! All hands (and paws) on deck!! 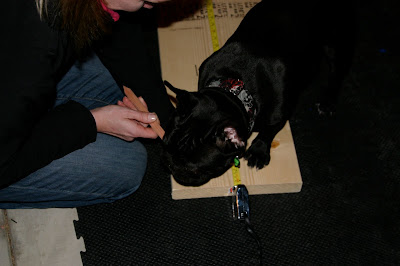 Ironically, the board turned out to be almost an extra inch longer than we needed (biggify the next photo to see) - we COULD have shortened it to fit down the stairs. Oh, well - it's in now!! 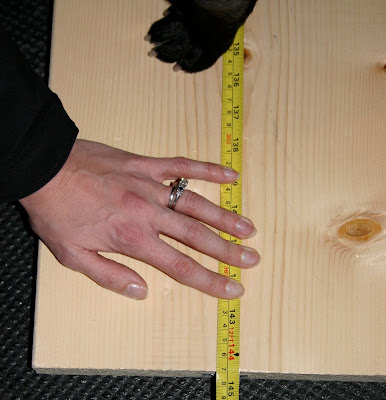 Even though he wanted to help initially, Brutus soon became bored (board?) with all the measuring, marking and assembly. 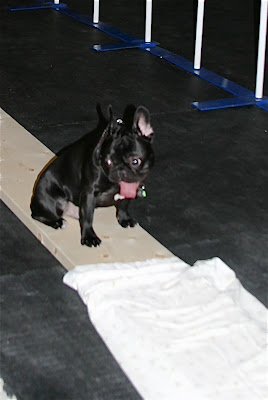 The base was already together, so in no time at all we had a working teeter!! Here's the finished construction, just needing a few coats of paint for a non-slip surface: 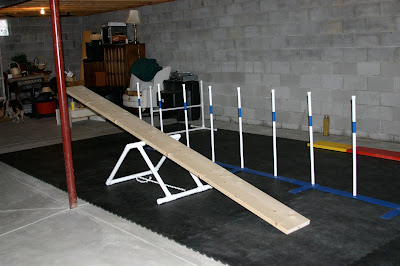 Brutus bravely tested out the teeter, giving it the honorary first tip, up 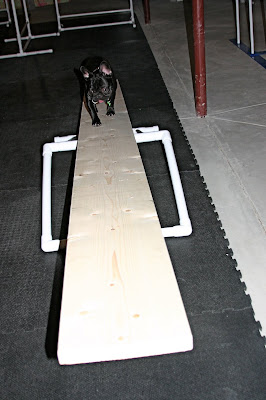 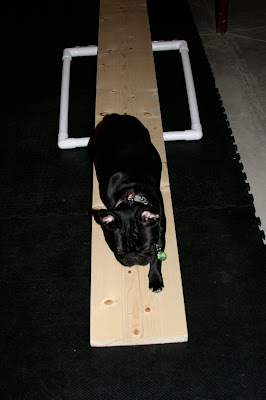 That being done, we called it a day. Not bad work for two blondes, a Frenchie and a Brittany. Well, actually Courtney did more of the work than anyone else. I ran around looking for tools, Sadie napped and Brutus just stuck his flat face in the middle of everything and hampered our efforts!
Now you'll just have to come back to see the final product, painted and ready for action (and hopefully in a shorter post!). Brutus has a lot more fun in the next post, so tune back in for the final installment of the Tale of the Teeter!! A big THANKS to Courtney and Sadie Lou for helping us build!
Posted by BRUTUS at 10:12 AM

Wow, looks like some two legger agilities just getting the board in the house! Brutus is very brave! Moose would not go near such a thing!

That's so cool. What an AWESOME set up! I wish I had room for that!

What method are you using to teach weaves? Just curious! Marge has really nice weaves and I definitely attribute that to having a set at home to practice on.

Sure you two had a very interesting day!
Glad everything went well and now... we are ready to see Brutus in action!
good job!
Kisses and hugs
Lorenza

Momma just had an oh duh moment. Our agilities stuff is all frozen into the back yard and I don't get to practice much especially since the RH howls and moans when I do. But he is afraid of the basement and there is a whole "exercise" area for momma which is unused. Hmmm...

Looks like this project was a two-fer. Your physical agility, and your mom's mental... I'm just sayin' It sort of TIPPED the SCALE there. hehehe

SHE says, if the guys were doing this, they'd have shoved it on through, ripping up the door frames and gouging the drywall. Us women work smarter, not harder!

Bonnie and her support staff

That is REALLY kewl!! Wish we had a basement to play in!!

A basement agility run is a very cool thing! We could have set one up in our place in New York, the basement was as big as a bowling alley, but Tucker wasn't so into agility as Dennis is -- and now we have no basement!

can we come over to play?

Brutus, looks like you did a wonderful job of supervising :). Mom says she probably would have had a few choice words for that board - glad you found a way to get it in. How cool that you have your own training facility in your basement.

BTW - mom rations out the marshmallows and we only get two at a time.

LOL! I can just imagine the day you guys must of had trying to get that board in the basement. Brutus is one spoiled Frenchie... as it should be! We can't wait to see more pictures of Brutus in his agility basement.

Wow, we are all impressed. Are you all up for hire? And we bet most men would not have thought to cover the ends of the board to protect those walls.

Wow, your homemade agility course is getting quite spiffy! Brutus will have a great opportunity to practice! A big shout out of "Nice work" to all!

Wow! I thought I knew about this from FB but now I realize, I knew nothing. What a production, Brutus. I bet you're too tired to take your Valentine's Day contest photo now. Oh, don't forget to tell your mom to change her camera settings to the highest resolution ;)
Twink!

sweeeeeeeet! Loki, Juno and I are headed over RIGHT NOW! we loves us the agilities... we do them all the time at school for fun but don't compete. some agilities, juno isn't allowed to do anymore (hip dysplasia0 but she can do a lot still! she did the teeter much better than Loki the first few times! that teeter scared the bejesus out of him at first!

Great job! Brutus is so fortunate to have his own agility course right in his own home.

I didn't realize that this was a channel set so that's why I asked! At first they looked like a regular competition set.

One thing that helps a lot of dogs get quicker weaves is throwing their reward treat/toy out in front of them as they come out of the weaves rather than feed it from your hand. Don't know if you do that already but a lot of people have suggested it to me, so I figured I'd pass it on :)

BTW, I love Forrest Gump, a ridiculous amount actually, so I totally smiled when you posted that in your comment. LOL

Good thing Brutus and Sadie were there to help. I can always count on my furkids to help me around the house :)

Mom would say, where there's a will, there's a way!
What a neat agility course you're going to have in your basement, Brutus! You'll never be bored!

Wow, we are impressed big time!! That is so totally pawesome. You are going to have the coolest basement ever.

Wow, I am impressed...it looks great! Nala would NEVER go on the teeter when we did agility...she was super freaked out...that and the skinny raised walk thing?? Don't remember the name. Anyway, nicely done on the construction.

What a fun adventure. Brutus did an excellent job supervising!