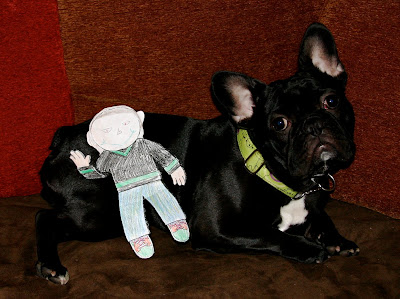 Our regular followers have probably seen Flat Brutus. He first appeared last summer when Paul & I took a trip out west without the dogs. I wanted to keep blogging from the road, so I brought along a cut-out of Brutus so that my followers could keep track of where we went (OK, and maybe he made me miss the real Brutus a little less too...). Flat Brutus has already been to the Grand Canyon, Las Vegas, Death Valley, and Sequoia National Park just to name a few popular destinations (click here to see the first of my Flat Brutus posts). The idea was not only successful, but has even caught on - Mango and several of our other blogging friends also have flat versions that travel much easier than their real counterparts! 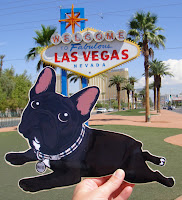 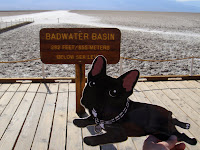 I'll bet many of you are scratching your heads wondering how I came up with such a bizarre idea. Truth be told, it is my permutation of a educational project used to help teach grade-school aged children about geography. The original idea came from the book "Flat Stanley" written by Jeff Brown: 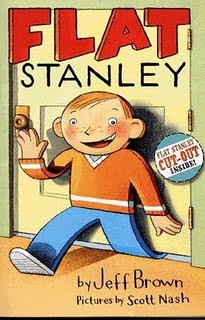 Unlike Flat Brutus, who travels in my carry-on, Flat Stanleys make their way around in an envelope via the postal service. Recently we were lucky enough to host a Flat Stanley thanks to our blog buddies Oakley & Swisher. 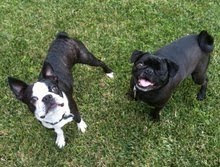 Seems that Oak & Swish have a human cousin named Jazmine who is a 2nd grader in Fresno, California. Here's what she and teacher Mrs. Cords have to say about the Flat Stanley project their class is doing:
In this story a boy named Stanley is flattened by a bulletin board. He enjoys many adventures while he is flat, including being rolled up, flown like a kite, dropped down a drain to retrieve a ring and being mailed. Flat Stanley is sent in the mail to visit a friend in California like I am being sent to you. Please send a postcard from where you live explaining to my second grade class what I did when I visited you. 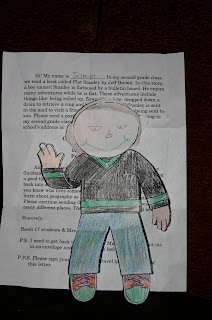 Flat Stanley hung out here for a while looking for things to do. He was a little unsure about meeting Brutus (note the nervous smile & wave), 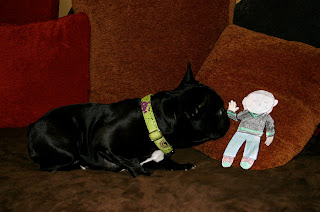 ...but was happy to find companionship - and a lot less drool - with Flat Brutus. Notice how much more relaxed Stanley looks here. 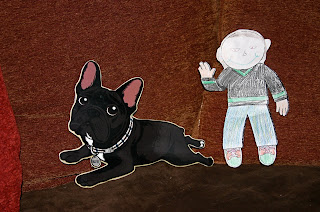 As requested, we sent a postcard to Jazmine telling about all the things Stanley saw in nearby Cleveland. As much as we have enjoyed our time with Flat Stanley, it's time for him to continue his travels. 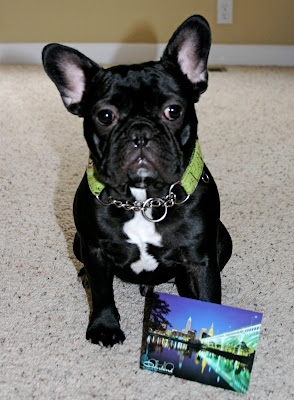 He's safely packed in his envelope, ready for his journey to Texas to visit with our friend Dory. He's really glad that his next stop is in a warmer place! 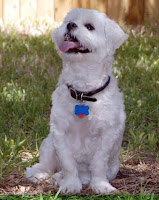 So look out Dory & Bilbo, here comes Stanley! I can assure you he is an easy keeper, totally housebroken & will NOT try to steal your food or beg from your humans!
Posted by BRUTUS at 9:18 AM

I had missed this. Very cute idea about Flat Brutus. Say, I got an idea. Why don't you make your Ca-O-Lympic entry be one of flat Brutus? I'm not sabotaging anything, I'm just coming up with ideas.
Twink!

Flat Brutus! Too funny.Noe I have to go back and read those old posts. Our pooches seem to always travel with us so no flat subs! If we go somewhere sans-dogs I'll keep this idea in mind!

I thought Flat Stanley was such a cute idea when my nephew sent him to me years ago. His instructions were to just have us give Stanley a tour and return him in a month.We faithfully took Stanley with us from Phoenix to Glacier Natl.Park,Montana. He went to 3 National Parks,got his pic taken with a cowboy,he was on a pro golfer's tee and even got a motorcycle gang to hold him for a picture.After all this fun we were sad to return him (& the scrapbook of pics)to our nephew. Then we came to find out (because his teacher wasn't too bright)...she had the kids do this at the END of the school year so she never asked to see the end results! Oh brother.:>(

OMD! This sounds so fun, especially for the second graders!!

We are glad flat stanley and flat brutus got along!!

My mom (being a BEtired Elem. School Librarian) knows Flat Stanley very well.
Pawsonally, I prefer the REAL Brutus.. Butt this will be fun to see what Dory does with him.

Very cool to meet flat Stanley. Dory and Bilbo will take great care of him.

Flat Stanley came to dog class with one of Rugby's fellow class mates before!

I really like the flat Brutus idea. In fact, I will prob have to steal the idea for next time I have to go somewhere without Rugby!

What fun this will be! Flat Stanley is really going to be making the rounds!

Fi's Mom here: That's GREAT!!! I remember reading that book as a kid and thought Flat Stanley had the life! I can't imagine a Flat Fiona. Or a Flat TaiChi, though! I can't wait to see where Flat Stanley goes!

We heard of that flat thing here but not flat BRUTUS!!! If flat Brutus wants to visit us let momma know.
Luv
Benny & Lily

Flat Stanley sure is going to have a great time with Dory and Bilbo!
I will check their blog to see him!
Kisses and hugs
Lorenza

Awww, we've heard of Flat Stanley. He'll have fun traveling to Texas. Just make sure when you come back out West this summer... BRING BRUTUS WITH YOU!!! And not the flat one.

Bilbo and I are sooooooo looking forward to seeing Flat Stanley!! We are already thinking of things to do with him!!

Flat Brutus rocks! My flat self has been on many adventures thanks to you.

Oh yes, my Mom knows all about Flat Stanley....how cute that you got one sent to you Brutus! I LOVE it!

You are killing me! I so get this! There has been a flat Nigel touring the planet lately - it's a really fun concept! :)

I knew about Flat Stanley but never considered a Flat Remi or Flat Noelle (my dogs). I am going to have to do that though - what a fun idea! Thanks Brutus!

What a great project!!! Mom may have to get one of her daughters to suggest that to their children's schools.

What a fun adventure!