Hey everybody, Brutus at the keyboard today!
First I wanted to give a big shout out to everyone who voted for me (and my labradork brother Mason) yesterday at Mango Minster! We didn't take the popular vote, however I did come in second for the Athletic Sporty dog division. There was stiff competition, and I have to hand it to Fiona for a well-deserved win! Thanks to Moose for all the hard work he did in judging what turned out to be a huge group.
Speaking of Moose, that brings me to the other reason for this post, a public service announcement. It seems that like many others, Moose is a little confused about my genetic background. We'll be out for a walk and mom hears "Oh, what a cute little black pug". Although we appreciate the spirit the comment is being made in, hearing that makes us grind our teeth! I mean we are very pro-Pug, know lots of great pugs (win, wink, Stella), but really?? Come on... 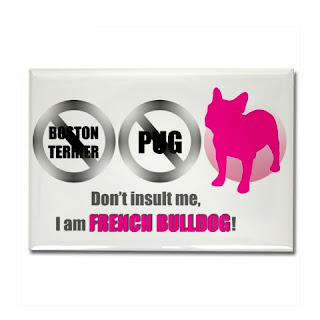 Please allow me to clear up the misconception that Frenchies and pugs look alike. First, lets take a close look at the tail. Here is what a pug tail looks like (I chose a fawn for clarity's sake): 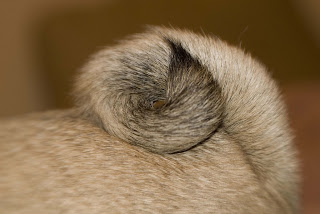 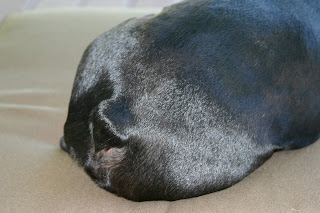 As long as we're on the topic, I'd like to mention that this is how my tail was when I was born. No cropping/docking allowed in Frenchies, we are bred to be tail-less (part of the reason we tend to have back problems, since it's technically a spinal anomaly that causes it to be missing).
OK, moving on. Now lets discuss the most notable difference at the other end: ears. Hear is a nice set puggie ears (in fairness to all our pug pals, this is a random photo I found on google). Cute how they fold over, isn't it? These are called "button ears" but rose ears are also frequently seen (think English bulldog ears). 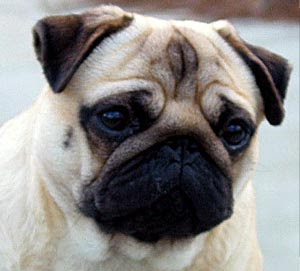 Compare that with my nice erect sattellite dishes. Mom says I can hear a flea sneeze two blocks away with these babies. They are my most distinguishing feature, I think: 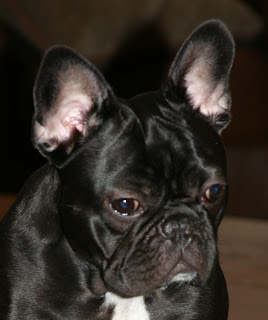 Again, no assembly required on the ears. Frenchies are born with ears down, but they stand on their own when we are about 6-8 weeks old (breed standard forbids any alteration).
The other dog I often get confused with is a Boston Terrier. This I can kind of understand. Again, we know some Bostons, and despite the fact that they are terriers, many are fine fellows! But they are much taller/leaner/leggier than us Frenchies. Plus their ears are pointier (many are actually trimmed to be such, which their breed allows). Here is a generic photo of a nice Boston: 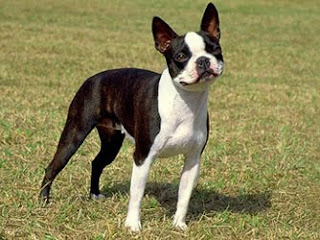 To compare with this recent photo of my beefy, stocky, flat-faced, round-eared self. Similar stuff, but in a more compact package! Compared to the 10-20 pound range of Bostons, we Frenchies pack up to 28 lbs. into a frame that mom often refers to as a bowling ball. 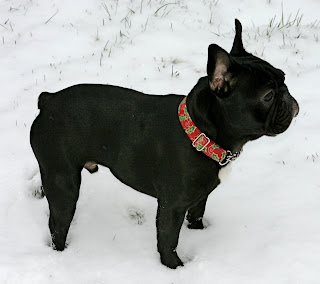 Well, I hope that clears things up for everybody (Moose). But you know, they say that imitation is the finest form of flattery, so I'll leave you with photos of two Frenchie wanna-be's. Here is our pug pal Salinger getting a little ear lift: 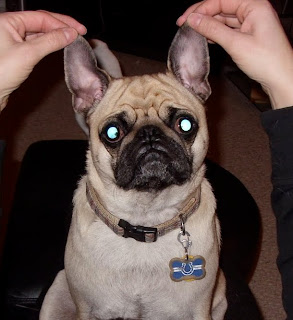 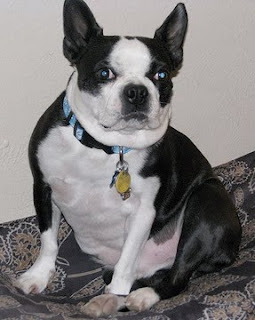 So thanks for the flattery, guys! And thanks again to everyone who voted for me at Mango Minster!
Brutus over & out!!
Posted by BRUTUS at 8:42 AM

We are all pretty proud of our genes. I have been called all kinds of "doganalities". Someone even thought I was a chiWaWa. The funny thing is... this stuff doesn't even interest US. It's all a two legger preference thingy.
Now to the really IMPORTANT thingy. CONGRATULATIONS BRUTUS!!! Woooooie!!! You took Second Place!!! I am soooooo thrilled for you. Are your mom and dad going to celebrate for you???
I think Mason did a grrrrreat job too. In fact you are both WEINERS..oooop NO.. THAT'S ME...YOU TWO are WINNERS!!!! We sort of did OHIO proud, Right????
Hey you are not going to get the big snow tomorrow and Sat.. Lucky!!! Me, not so much. I'm just sayin'.

WOW...congrats on your placement in MangoMinster!!! We totally voted for you!!!!

Mom got all flipped out excited to see my pic on your bloggie while I was doing my Frenchie impression! I have a few Frenchie friends and yeah, there is DEFINITELY a big difference! Silly people!

Mom gets all honked off when people call me the wrong thing too...she hears "ooohh a PUGGLE!" all the time (WTF?) and some teenager RAN from me once at the park yelling "OMG...it's a PIT BULL!" (PIT BULL? DOUBLE WTF???)

Make sure you check our bloggie later...Mom is cooking up a post about her playing with a Frenchie yesterday!!!

Congrats Brutus!!!!!! You are one of a kind (Frenchie kind)!

Now Tanner wants to be a Frenchie so he can weigh 28lbs. Thanks for clearing all of that up for us.

you are surely not a pug :)

CoNgRaTuLaTiOnS Brutus on getting 2nd place!

But. You got some splaining to do.

"and despite the fact that they are terriers"

Congratulations again from me, Brutus :) As for today's post, I found it very informative. We don't know much about breeds in my home, but we sure learned a bit from you. Thanks
Twink!

Brutus, you are so funny! I can see how you could get tired of all of the incorrect breeds you are called- I get it too! Mostly people think I am a bull dog... go figure! I guess it goes both ways!

Someone recently thought I was a SHAR PEI!?! Geez....

A BIG congrats on 2nd place at Mangominster! You really give those bigger agility doggies a run for their money!!!!

Crystal clear now Brutus! I had not even thought about how similar Boston's can be but think I can usually tell when I see one (who knows though?).
Now as for that Salinger, he illustrates how Moose might have been confused. You see... in your entry photo you were doing agilities flying through air so if you were a pug your ears might be standing up in that kind of photo- like Bajas the pug's entry photo... No jury would convict me I tell you! Actually the truth of the matter is that I am a regular reader and as your blog is called brutus the frenchie I definitely knew you were not a pug but in my wee hours of the morning in a photoshop induced stupor who could blame me!? :-)
Anywho, this was a wonderful PSA on behalf of all 3 breeds.

Great lesson for all of us, thanks. Mom said she never knew there was a breed like Brutus. Great explanation of the differences between the difference breeds.

hey frenchie Im sure glad you cleared that one up for everyone (I knew the difference) but hummans can be kinda dumb in the dog breed area sometimes!! BOL!!

I truly gasped aloud to myself when Moose posted "Brutus the Pug!" before I realized it was a joke.. LOL! You must have a lot of patience.. I would have gone nuts by now!

Congrats on your win!

Congratulations Brutus my friend!! We love that you finally cleared things up. We were also called..I could barely say it.."English" Bulldogs...
Benny & Lily

Congratulations Brutus!
Thanks for all that info about your breed.
You have no idea how many "breeds" I am supposed to be here! From Chihuahua, to Basset Hound and the "what kind of breed is your dog"???
Kisses and hugs
Lorenza

Oh, it must be terribly frustrating always being confused as something you are not. You are definitely one sturdy Frenchie but I did like the Pug and his ear impression...cute. :) People always ask Mom if I am a Great Dane or a Whippet??? I don't see it??

Aroooooooo! Congrats to youuuuu!
I knew all along you were not a shameles PUG, I knew you were a Frenchie all the way back to yer cute bum!

I hope you get lots of scritches and treaties for placing at MM!

Congratulations, Brutus!
Your mom is great at splainin'! You are one handsome Frenchy!

Thank you for that most instructional guide to small round doggies. I am often called a Bull Mastiff which makes me mad since they are just little mini versions of me.

that was a great comparison. i have wondered about the frenchie tail. they are cute little stubs. and your big beautiful ears...well, they are just fabulous! are your ears really soft? we say that the puppies at our house have velvet ears. or if you say it fast velvetears.
hugs,
puglette
:o)

Thank you for enlightening us.

Most excellent description. Random hoomans think I am a dalmation... I might have looked like one when I was a baby. But seriously a dalmatation that has 36" tall shoulders?

Thanks for clearing that up for us all, WHo knew??? and Brutus, you are one pretty cool and handsome and unique French Bulldog!! Congrats on 2nd place.

Congrats on coming in second! Not a bad showing at all. We wanted to apologize for being so absent in the commenting. Things have been crazy for us at our house with a lot of illness.

Great post and very informing. We had no idea! But don't feel bad, people get us confused with anything that's white and small.

The only thing we haven't been called yet is a rabbit! But there's a first time for everything, right?

We have missed you guys and love you lots!

hi brutus!
oh my gosh! we love your blog! emmitt and i cracked up at your pawsome post today!
it is sooooo nice to meet you!
we have added you to our google reader thingy so we can visit you all the time. :)

Hi Brutus - oh, well DONE on your positioning at Mango Minster, how pawsome! It's such an amazing competition - it must be almost impossible to be a judge on it, we're glad we're simply sponsors and didn't have to make any hard decisions!!

We loved your puppy information broadcast - so interesting and so funny! Like you we're proud of our lineage - we love being terriers, he he he! Although JD is convinced he is part wolfhound as he's so tall.....ahem!

I know the difference, me lads, no worries! I'm an Irish Terrier, and I have a blog.

your little nubbin and those ginormous bat ears of yours are just perfect! in face, you have huge ears like me and my sisters do! Isn't it great to be able to hear all those things that no one else hears?

We feel SO remiss in not getting over here sooner to congratulate you on your MM win. CONgrats Brutus!! You did great!
XXXX-BRD
OOOO-Hootie