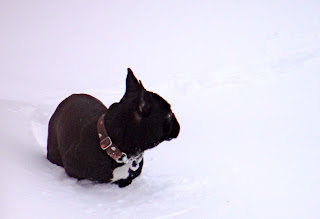 So it snowed.
A lot.
Started Friday afternoon, and by Saturday morning we were buried. Not sure of the official totals, but we have well over a foot of fluffy white stuff. 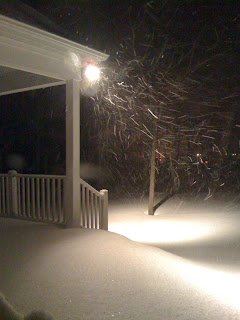 Beautiful, unless of course you have to actually get somewhere in it! Mostly we think of the difficulty the snow creates for us humans, having to operate a car in the aftermath. But for small, round dogs, just moving around can be a real challenge. 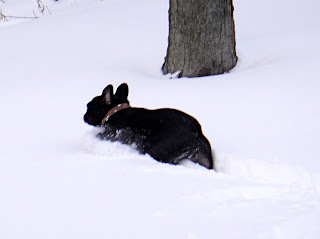 The snow is already up over Brutus' back, and I hear another storm is on the way tomorrow. As it is the easiest way for him to get around is to dolphin-dive. 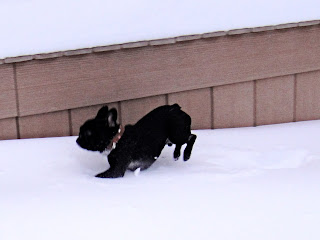 The trees were beautifully frosted this morning, it was all I could do to stop taking photos of them (although the 3F temps helped). 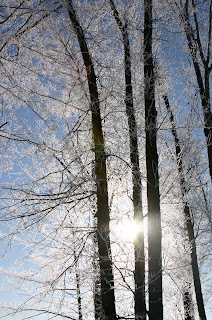 The sky was a brilliant blue, and it looked like each limb had been dipped in powdered sugar. 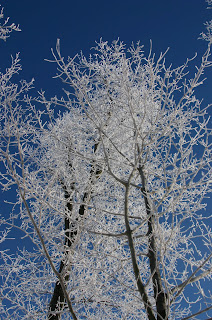 The boys didn't find it nearly as enchanting, as they tunneled around the yard. 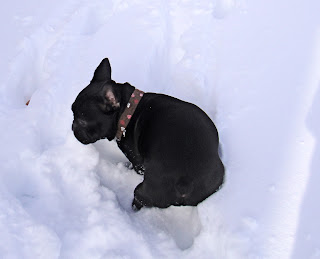 Where's a guy supposed to do his business out here??? 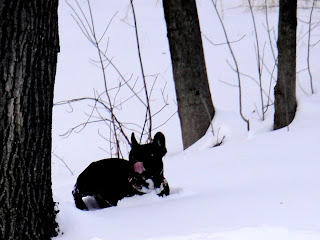 Catching snowflakes on your tongue, Brute? 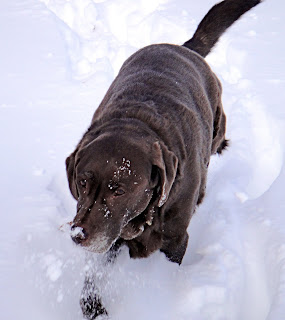 Mason has been nice enough to tromp down some little routes (which I now call "poop chutes") that Brutus can navigate through. 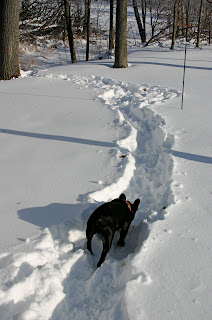 So at least for now it is a little easier for Brutus to get around.
But look out, there is another storm on the way tomorrow, supposed to dump at least as much snow as this most recent one did. Brutus is going to need his snow snorkel for sure. Or maybe learn how to snow scuba if things turn out as bad as they are predicted. Instead of a photo like the one below, next time I'm afraid you might just see the tips of Brutus' ears!! 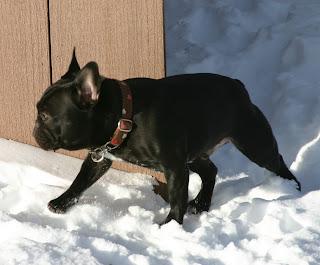 Good job on Mason's part. What a furiend! Hopefully you'll find his tunnels again tomorrow, although I'd personally love to see you in full scuba gear. What do you say, Michelle?
Twink!

Yep,It's gonna do it again. Down here we were supposed to be spared, butt the forcasters have changed that now. 5-8 more inches.
It was -4 this morning.

We wish you could send some of those deeper snowfalls our way. We got a storm on Friday too, about six inches. Then it started to snow last night and snowed off and on ALL DAY and all we got was about an inch. We can see how it might be tough for Brutus to get around, but oh we would just love it.

Your photos of the trees were awesome and we loved the description of them being dipped in powdered sugar.

Uggh, snow sucks huh? Good thing to learn...following in Masons paths. There is definetely a limit to how much snow is 'fun' snow! The trees are beautiful!!!

We got 30 inches, with another expected 10-20 inches tomorrow. Lucky for us though, it has been pretty warm at 32-36*F. Rugby need to get one of Brutus' snow snorkels!! :p

Potty paths are critical during times of fierce snow. Mason is doing a great service.

A little guy like you could get buried out there!

It's a good thing that you have a black coat or we would never find you!

Oh Brutus, thank goodness for snow plow Mason! And where is your coat? We are pretty sure that is child abuse when a pawrent sends their kid out in the cold without a coat. Great pictures..beautiful
Benny & Lily

Having a big dog to clear a path helps. We didn't get but a dusting of snow the other day, but they are predicting 6-12 inches starting tonight into tomorrow, so I'm sure it'll be heading your way! Hang in there Brutus!

I wish somebody would make me a trail through the snow! I'm ready for spring!

Oh no Brutus,
What will you do in the snow? You need some snow boots.
Sally Ann

That's so much snow !! I just got a little here in Colorado but I'll take any I can get ! What are you gonna do with more snow ? You'll get lost for sure in it !!

Yup - they're forecasting another 15" here, too! They weren't lying when they said it was going to be a snowy winter.

Love the photos - that little black body looks great up against the perfect white snow!

WOW! That's some snow! It's a good thing you are an agility champ so you can jump through the snow, otherwise yer nose would be buried in the white stuff. BRRRR...I bet you do yer bidnez and get back inside in a hurry!

Bwutus
That was awfully kind of Mason to make you that poop shoote.
You look pawfect against that bwilliant white snow. Tell youw hoomans not to twyto navigate, just stay home and play wif you
smoochie kisses
aSTA

BOL...poop chutes! Good thing you have mason to help ya out. It sure is pretty though on the trees. Maybe you should give mason some extra snuggles for his good work.

what a good big brother to make poop chutes for Brutus :)

A Poop Shoot! I love it! That's a great big bother you have! I hope we see more than the tips of your ears tomorrow!

Brutus
Hate to be the bearer of bad news, but we are to get 8-10 inches by Wed and it will be headin.. right your way after it leaves our house. We will know more by morning but lets keep our paws crossed that it fizzles out!!

Yeaaaaaaaaa for Mason! We make our dad snowblow a huge area for us to do duty! And we hear that snow is on the way for us too! whoohoo

We know how you feel - we love it when the snow is crunchy and we can walk on top of it.

Brutus dear, I INSIST you have your mom book a flight and send you out here immediately! Tromping through a foot of snow is no way for a Frenchie to live.

Besides, I need your protection from this brute of an English bully. He's rude, crude and just plain smelly.

Right now it is warmer in Edmonton AB, Canada! But we have the same amount of snow. Hang in there, it will probably melt before ours, I am a jealous.
Willis the Frenchie and Winston the Bugg.

What a brave little boy you are Brutus!!! We hope you don't get too much more snow...

Poor Brutus! I wish spring would get here in a hurry! :)

Cool photos! Poor little Brutus! The snow is giong to be over his head soon!

Brutus, tell your parents to get out there and shovel someplace to do your bizness. Thats what parents are for....just ask me!
Snuggles,
Twix

It's good you have Mason to tunnel out those poop chutes! Maybe the next snow will miss ya.

Mason is an awesome big brother! Poop Chute? Hilarious! My big dog from child hood used to do those dolphin moves when the snow got deep. Very effective! Does look perilous for a small round doggie!
The pics are beautiful! I have not seen snow in years but I remember how clear blue the sky could be after it snowed. Lovely backdrop for your photos!