Flat Brutus: What a response!! 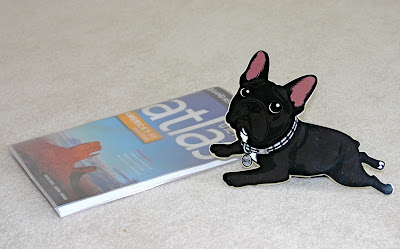 WOW!!! We just can't believe what a popular little guy Flat Brutus is! Thank you so much for all the requests to host him - currently I have almost 40 DWB furiends for him to visit!! This IS going to be quite the tour!! Before he left, we all sat down to plan out his route - it's going to be a coast-to-coast adventure!! 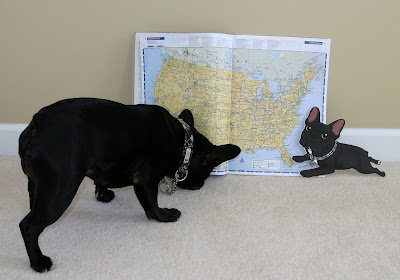 Let's see... Dory and the Pittie pack are down here in Texas....
I think I have replied to everyone who has expressed interest so far. A few of you posted that you'd like a visit, but I did not receive an email with your address. Please let me know if you offered to host Flat Brutus and I did not email you in return!!
I will continue to accept requests for the foreseeable future, as the project will take months to complete. If something changes and you need to withdraw or change your hosting time, just let me know. I think that you can understand that with as many people & doggies who are participating, please try to send Flat Brutus on to his next destination as soon as you can. He'll be out there for many months as it is, and I don't want him to get too homesick or road weary!!
As soon as I figure out how, I'll put up a button in my sidebar so that the Flat Brutus World Tour information will continue to be accessible for anyone who happens onto our blog in the future. Maybe I'll even figure out how to use the new "tabs" that Blogger has introduced, so that Flat Brutus can have his own permanent page within the blog. So if you still want to participate, just drop me a line - the more, the merrier!! 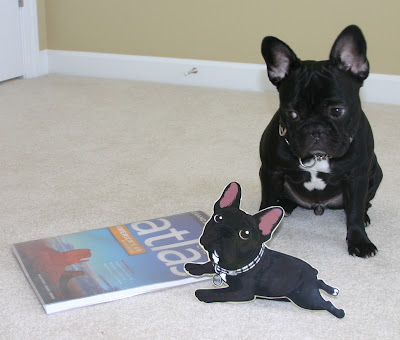 Gosh, when are we gonna see him again???
Since the project as has become so large, I'm making a few adjustments to make it as successful as possible. Instead of sending Flat Brutus out in the order the requests were received, I hope you can appreciate that his travels will be much more efficient if I plan his itinerary by geographic convenience. There are quite a few of you out west, some in the central states, a bunch in the midwest, and a few up in New England, and some down on the Gulf coast. If keep the distances between stops as short as possible, it will cut down on his wear & tear in the hands of the USPS, as well as get him around to everyone faster. 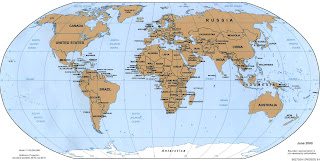 This project has literally become a World Tour!! I've had several requests from outside the US (Singapore, Malaysia, Germany), so I hope you all don't mind if I use a 2nd Flat Brutus to do those visits. I suspect that the "International Flat Brutus" will inevitably get stuck in postal limbo while traveling far & wide, and I want the hosts in other countries to enjoy him without worrying that they are holding up his tour! That being said, any of our overseas furiends who hesitated to participate are welcome to join, you just might have a little higher postage to pay. But if you are interested, Flat Brutus has his passport all ready!! 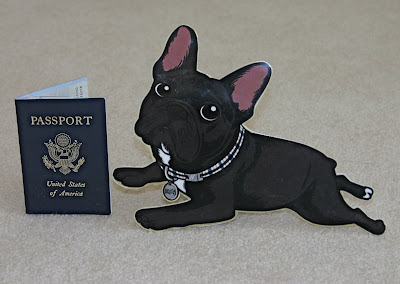 A few words about French Bulldog Rescue Network and the fundraiser that Flat Brutus seems to have become. In my last post, I pledged to donate $5 for each time Flat Brutus was hosted. Some of you have been kind enough to offer to match my donation, and wondered how to do it. I have contacted FBRN to ask how they'd suggest I handle additional donations, so that it is as easy as possible for those who want to help, while still allowing me to keep track of how much Flat Brutus is able to raise to help his fellow Frenchies.

I know times are tight, and it is by no means a requirement for hosting flat Brutus, but I would be more than happy to have help in meeting my goal. FBRN has hundreds - if not thousands - invested in helping each Frenchie they see through fostering, and if we bloggers could help finance just one well-deserving bulldog, I would consider the Flat Brutus project a resounding success!!! I will keep you all posted on how to donate for those who are interested. 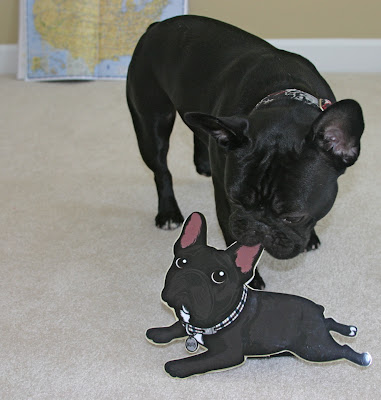 Gonna miss you little guy! It's a big world out there, so be careful!! Here's a little ear nibble for good luck & safe travels!
Now back to the present: the Flat Brutus World Tour has officially begun!! Benny & Lilly posted about him already today! He had a great time with them in California, and really enjoyed visiting some fellow Frenchies (check out the post at Doggy Days to see what great hosts they were). Now he'll be off to see his girl Stella and her gang (including Betty the Frenchie). Something tells me that visit might take a while, I don't think Stella is goning to want to share Flat Brutus with anyone else!! 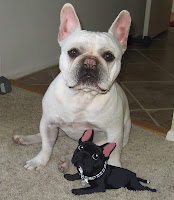 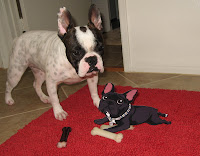 The real Brutus and I are busy finishing up the final details for the rest of the World Tour, and will be emailing you all soon. Have fun with Flat Brutus, and be sure to let me know if you have any questions or concerns. Since his journey is going to be so extensive, I expect that FB may need a little TLC along the way, so feel free to send him home if it looks like he needs some time off or any surgery!! 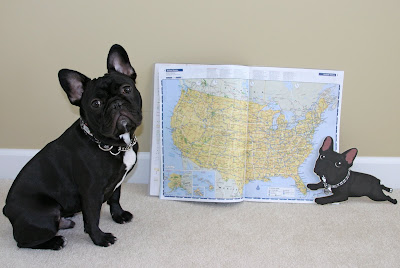 I missed the post while being lax this weekend! my request is on the way :)

Oh Brutus we hope we are not too late! Hootie and I would like to host you also. We are in Phoenix now, but should be in farrr N.Idaho in about a month or so so that is where we should host you. We're usually up there until December or January. Our email is: cassiejo@juno.com

This is such a very cool project!! We hope you get LOTS of donations for the cause!!
Smooches,
BabyRD & Hootie

Wow, my Brutus is sure getting around! Good thing it's Flat Brutus or I would be REALLY jealous!

Mom is just so tickled about the fundraiser you're doing for FBRN. Everyday that we have Betty and she comes out of her shell more and more, mom gets a little leaky thinking about what Betty's future would have been without FBRN. She probably wouldn't even be on this earth anymore if it wasn't for them.

Soooo, my dearest and most handsomest Brutus. I sincerely hope your mom sends me my very own Flat Brutus. Otherwise, I can't guarantee I'm gonna mail him off to the next home...

Love and many Puggie kisses!
Stella

P ess, I've been working out so I look Pugalicious in my dress for Sal and Pugsley's wedding!

I loved Benny and Lily's post today :) What fun FB had! I'm waiting to see you organize all this. I think it's already taken off with a bang. Love the idea of matching the donations too. Great job, Michelle!
Twink!

What a grand update on Flat Brutus. Can't wait till he comes to KY.

Pee Ess: We are thrilled that FBs world tour will benifit 3-d frenchies in rescue!

We can hardly wait to see him and will be glad to match your donation. Mom is trying to find jobs around the house for us so we can make extra money.

oh the flat brutus project is fabulous!
we cannot wait to follow him on all of his adventures!
xoxoxo
m & e

We tried to send you an e-mail to host Flat Brutus, but it was returned saying it was undeliverable! We're trying to figure out a way around that!

We can't wait to host flat Brutus and will happily match your donation!
We're off to read about his day with Benny and Lily!

I would LOVE Brutus to visit us in New England, but we are not members of dogs with blogs because we have cats and no cats are allowed.
If you want him to visit us, we would love to be a host family!!!
xxoo
Deborah

His furst stop was pawesome!

It will be such a blast watching him tour the khountry and the world!

This is an AWESOME idea!! Love it! Hmmm....wonder if I could do something similar but send money to an adoption cause....ideas are welcome oh creative one :)

I just saw Brutus in California! That's so awesome!

I'm going to ask my Humans to see if we can host Brutus too. Though we do live way out in Singapore. But I saw that you already have some Singapore hosts lined up, so that's great!

I'll get my humans' permission to email you soon!

You know what this means, Brutus...
you are FAMOUS!!!

This should be really fun, we have to go see how FBs day in California was now... :)

Great post..thank you. Brutus you are going to more places than we have ever been. BOL... Flatty should be arriving at Stellas any day. What fun!
Benny & Lily
Mom volunteers for FBRN. THANK you!! for your generosity.

I'd love to have Flat Brutus here with me but our postal service is not relieable these days and I don't want him to get lost!
But I know I am going to enjoy seeing him going all around the world!
Kisses and hugs
Lorenza

this will be such fun!! we are excited for our upcoming visit with flat brutus!
hugs,
puglette
:o)

Wow - I must have missed the info about Flat Brutus' tour in my absence. What an awesome idea. He's going to become famous!

Oh if Brutus wants to come to Maine I'd be happy to drool on him! Is there someone else from Maine hosting him? The closest to me I know is Mango.

P.s. I don't belong to DWB :( they aren't accepting new members... Can I still play?

We just signed up. The hounds can't wait to have you visit VA. I'm sure the snow will have melted by then.

woo hoo we can't wait, he is going to smell pawesome when he gets here.