Hope that everyone had a lovely Easter weekend.  Beautiful weather here for all the egg hunts, couldn't have asked for a more perfect weekend!
As promised somewhere in the middle of last week (before GABE and Mason's birthday bumped it out of the planned spot), today is another Flat Brutus installment.  He's made it around to visit a few more bloggers, so in case you haven't seen their posts, here's what FB has been up to.
After leaving Rocky Creek Scotties, Flat Brutus headed to Spotsylvania, Va to visit with a whole bunch of greyhounds at Gengi's Corner. 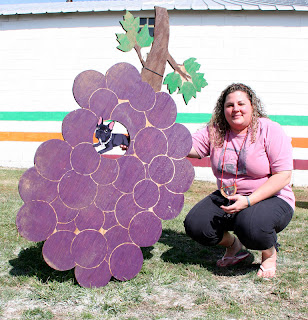 No, I said bunch of greyhounds, not bunch of grapes!!  As you can see, FB got to hang out with the humans as well.  He as even got to got to the Fredricksburg wine festival, where the humans found this coolest agility jump ever for him to hop through!  Speaking of hops.... 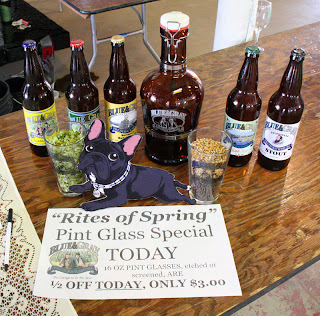 After partying at the festival, Flat Brutus understandably needed a nap.  Here is hanging with the whole pack of hounds, lounging as only greyhounds can.  I added the green arrow so you can find him amongst all those other pups (there are 9 to the best of my count)! 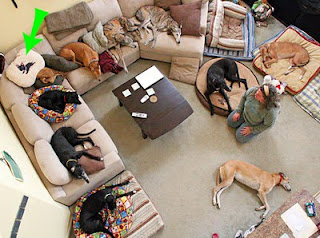 When everyone was all rested, the pack headed out for a nice walk with Flat Brutus... 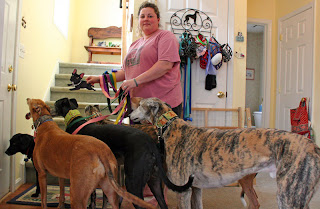 ... which understandably created the need for more lounging when they returned home! 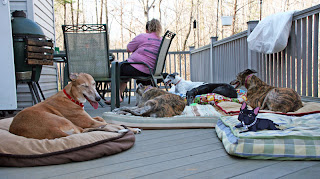 Although he was not at all daunted by being surrounded by such large hounds, Flat Brutus found some more of his own kind to visit with in the yard! 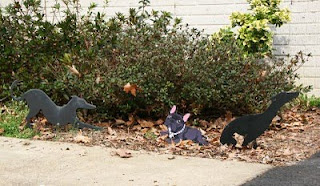 Flat Brutus' visit with the greyhound pack was very special because all those hounds are rescues.  Here he is with one of their fosters, Sarah, who was fresh off the track.  She was very shy, so Flat Brutus made sure to spend a little quite time with her. 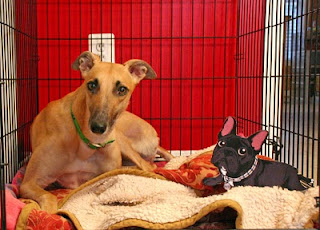 Pretty neat that one group of rescues is helping another, eh?  A big thanks to the hounds & humans at Genji's Corner for a very generous donation to FBRN in addition to having such a great time with Flat Brutus!!
Next Flat Brutus was off to Kentucky to visit some other bloggers, the Two Country Poodles, Mollie Jo and Bobo.  As soon as he arrived, Flat Brutus accompanied them on a trip to the vet for a checkup. 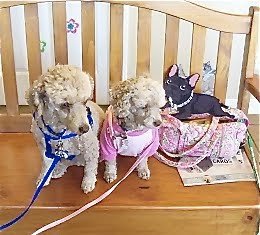 As a reward for good behavior, they all got to go for some special treats afterwards.  First they went foa stroll at the local flea market (thank goodness they didn't find any fleas...) 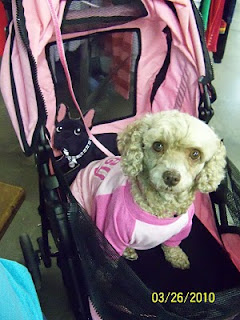 Next they stopped at Sonic for some sweet tea, and even met their mascot! 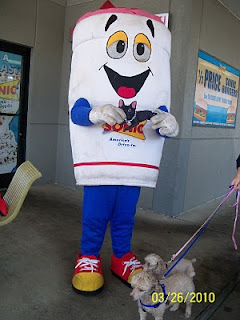 Then they picked up a pizza and headed home. 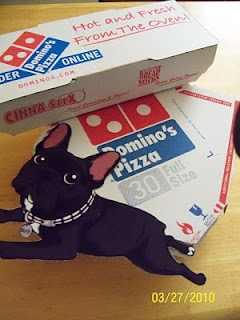 The poodles' mom helps with rescue as well, fostering and often transporting doggies in need.  They even got a new foster while Flat Brutus was visiting, Miss Hunny! Flat Brutus apparently is a great ambassador for rescue, here he is comforting and cuddling with Hunny. 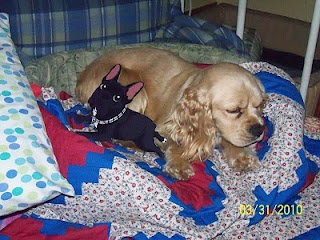 As they say, all good things must end, and soon it was time for Flat Brutus to move on to his next host.  Mollie Jo personally saw to it that he was properly handled at the local post office (I'll have to hide this photo from the real Brutus, he never understands why he can't come into the post office here!!). 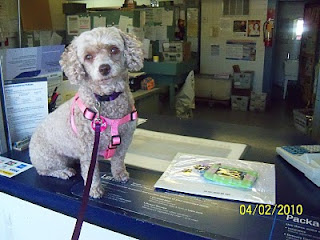 Thanks for being great hosts, Mollie Jo & Bobo!!
As we enter the 2nd month of the World Tour, Flat Brutus will be making a few stops in Tennessee next, before heading south to North Carolina, then on to Florida.  Gotta finish in that part of the country before it gets too hot!  Frenchies melt in warm temperatures you know, and these mailing envelopes aren't exactly air-conditioned!!
Posted by BRUTUS at 9:20 AM

FB meets many new friends!
He looks like he's having pawesome fun :)

Whew! I can see why Flat Brutus needed so many naps! He was a busy little (and flat) guy! Thanks for the update of his travels! Love following Flat Brutus!

Thanks for sending Flat Brutus to visit we had a BLAST!

That Brutus is getting around! We're trying to think of cool things for him to do when he gets to us.

Flat Brutus has been busy! I'm thinking he may get to us by June. Wouldn't it be cool if Flat Brutus was with me for the 4th of July?

Can't believe how much Flat Brutus is getting around. Before you know it he will be visiting with us in Indiana :)

I'm Most Glad that FB's hosts are letting him get some rest between his adventures. Travel can be very much tiring. I can't wait to see where he goes next!

What totally exciting trips FB has already been on!! All those greyhounds sure are pretty and we love two country poodles!!!

FB is having quite the grandiose tour. Look at all those greyhounds - and so well behaved on the furniture. We love Mollie Jo and Bobo - so good to foster, and oh how sweet is Hunny. Looking forward to more of Flat Brutus' journeys.

Geesh you sure get around!!!
I love the grey-houndzzzzz chilling!
Lotalicks and lotsaluv
MAXDOG IN SA

Oh Flatty you are hysterical. You even had your own bed when you were hanging with all those big doggys. The wine festival! You sure get around. Looks like you had a blast!
Benny & Lily

Thoses 2 country poodles are so cute. Im so excited for when you get here B Boy, man we ae going to party!

Mom just showed dad the picture with 9 puppies and asked when she can get more. :-) He just shook his head at her. Maybe FB can come for a vist.

What fun travels Flat Brutus!! We love seeing all the cool places that you are visiting before you get to us!!

It's amazing and inspiring how much Flat Brutus gets around!

Mom was jealous of FB's visit to the AGJ Festival!

Maybe Flat Brutus needs to start traveling in style in a cooler! This might be easier on the poor little guy as summer approaches! He sure does get around! We can't wait for him to stop and see us!

those greyhounds sure do know how to lounge!

Wow! He is really making rounds! I wonder what he will do next!

That sure is a lot of greyhounds.

Flatty, how much is fun that! All those greyhounds and we are friends with the country poodles also.
I'm glad your having lots of fun!
Deborah

Many thanks to FB for sharing his traveling adventures with us. Me and Banjo most likely won't be going on vacation again this summer so we will enjoy reading all about his visits with every buddy.

oh, that flat brutus is having all kinds of totally super adventures! i kinda wish i could fit in an envelope...
*woof*
the booker man

About time. We've been waiting for Part II for e-ver! What took you so long? BOL
Hey, Flatty, those are the good times!
Twinkie

can't wait to host flat Brutus...am glad he;s neked as our weather would melt him; trust he likes ice cream!

chikisses
coco
pee ess: i pray he does NOT arrive when mumster flies off the week of April 20 bol

Flat Brutus sure is making his way around and looking like he is having the time of his life, ;-)

He will never forget all his adventures

Alright! We can cross 2 off our waiting list! LOL

Flat Brutus is having a grand adventure. When they retire, my mom person wants to do greyhound rescue, so she loved seeing the pics!

The Bruti are having so much fun! I cannot wait to have some fun with him.