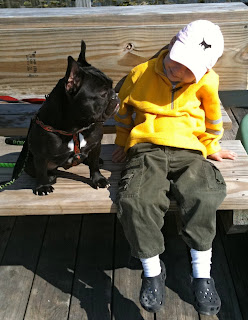 We took advantage of yet another beautiful spring day yesterday with a walk along the Ohio-Erie Canal in the beautiful Cuyahoga Valley National Recreation area.  Our favorite walking buddies (Courtney & Teresa ) and a few of the furry faces from the Funny Farm accompanied us once again.  Also making a special guest appearance is Courntey's cutie-pie of a nephew, 3-yr old Logan (pictured above).  Brutus and Logan get along great, and as you'll see, are better buds than ever after this adventure. 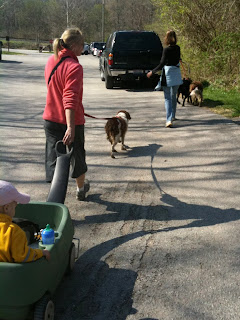 After a short ride in the HeeHaw mobile, we set out on the towpath.  We were a force to be reckoned with, 28 feet strong (we 4 bipeds, plus the 5 canines).  Make that 28 feet and 4 wheels, since Courtney pulled Logan (as well as some important supplies) in a wagon. 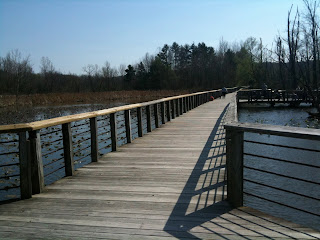 The trail begins on a boardwalk across a huge marsh.  This is quite the nature preserve, and all sorts of creatures were just reappearing after hibernation.  We saw lots of turtles (biggify to see all the little bumps on the logs for what they really are),

And one very slow-moving froggie, bravely sitting on the path. 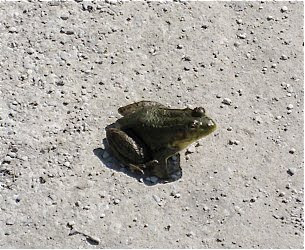 The temperature was in the mid-60s and it was much sunnier than we anticipated,  so Brutus needed lots of breaks and water to keep from getting overheated.  Since we were already stopped, we decided it was time for the obligatory group photo.  From left to right, that's Taz, Jaeger and Sadie Lou (back side of bench), and of course Brutus and Logan in the front. 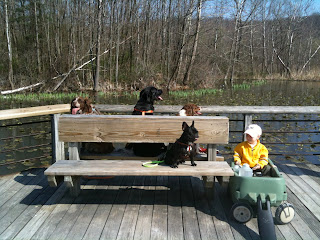 Soon we continued, hoping that the wooded path ahead would offer some much-needed shade for Brutus.  It's been so unseasonably warm here lately, we keep forgetting how early in the year it really is, and that the trees have only just begun to leaf out.  Poor Brutus, there wasn't much shade to be had.  I ended up carrying him for a while (to the amusement of passers-by), but toting a 25-lb bowling ball with legs was not the easist way to hike.  I was so relived when Logan, being the nice little guy he is, offered Brutus the front seat of his wagon as a more comfortable alternative. 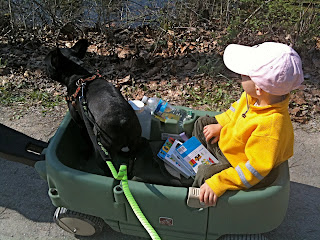 This ended up being a great solution, and Brutus was hot enough that he cooperated pretty willingly.  Not to say that he didn't leap out a few times - to the utter deligth of Logan, who thought this was the funniest thing he'd ever seen! 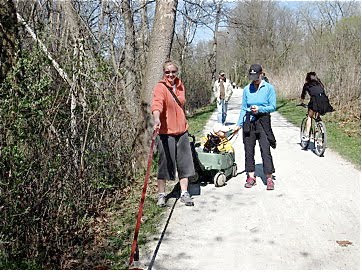 That's me in blue walking next to the wagon, poor Courtney out in front pulling it.  Brutus almost doubled the original payload, so Courtney really got her workout on this hike!   Brutus was certainly appreciative of her effort, although not above doing a little backseat driving... 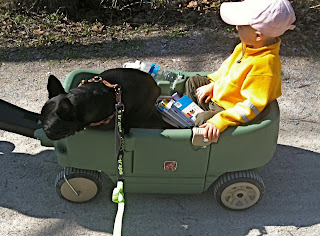 Can't you go any faster, Courtney?  Hey, watch out for that hole!  Precious cargo back here, you know!
So in the end, Logan and Courtney saved the day, at least for Brutus.  As it was, he was one hot Frenchie by the time we got back to HeeHaw mobile, and definitely appreciated it's air-conditioned interior! 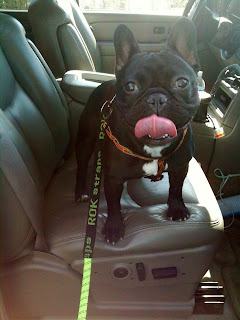 If my tongue gets any bigger, it's gonna cover my whole face!!
Not to say that any dog can resist a little head-out-the-window time.  Brutus was riding in style, after all (don't worry I only let him do this for a minute, and had him firmly strapped in!)

In the short time it took for us to return to the Funny Farm, Brutus had recovered nicely.  We got unpacked, and Teresa made sure that all furryfaces were present and accounted for.  Brutus (with me behind the camera) is #9 - if you click on the photo to enlarge it, you can count for yourself.  Yep, that's everfurrybody! 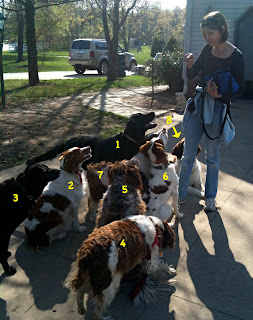 As a thanks for sharing the wagon with him, Brutus offered to help Logan with some sidewalk art while the rest of us looked on. 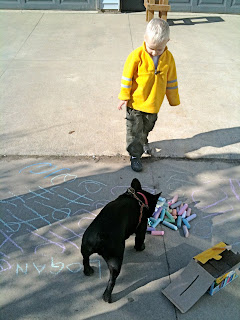 Here, Logan.  Use the green chalk next!
And so for Logan, here's one more big, thankful smile from your pal Brutus.  Frenchies are like elephants, they never forget!  Brutus will be happy to return the favor however he can, preferably by helping to clean your cute little face the next time you eat some ice cream!!

Thanks for the lift, little buddy!
Posted by BRUTUS at 10:18 PM

How cute - the relationship between kids and pets is a force to be reckoned with! I wish there were calm and respectful kids around here - sadly, they all seem to lose their minds when they see a dog, and that doesn't sit so well with Marge.

Looks like Brutus really enjoyed himself today - I hope he slept soundly when he got home.

It must have been the weekend for canal trails! lol Brutus, I'm not sure that you didn't have the best idea of the bunch. Mom is thinking about trying out a wagon for Lilac, but we're not sure she'll go for it. I'm glad you had such a good time! Logan looks like a good buddy!

Oh Michelle! Do I know what it means to have a dark coated piglet not handling any kind of sunshine or heat well. Poor Stella has the thickest coat! We end up carrying her even after a few blocks.

Brutus is so fit, he must have been really not used to the unseasonably warm weather. Thank goodness for the wagon.

Love, Shannon and the Gang

Dude...that looks like one of the Batan Death Marches that my hoomans are always dragging me on too!!! YAY for AC for those of us with smooshy faces!!!

Great pics! Logan is almost as cute as YOU are!

What a wonderful walk you had.. those are great pictures!!! Gotta love the tongue shots! BOL!Nice you made a sweet little friend Brutus :)

Brutus' new pal is so cute!! They make a cute little pair!!

That hike looks fun... we were not really able to do any walking outdoors this weekend... too much rain!

How cute you are in the wagon, and how generous Logan is!
It looks a great trail.
Spring is a kind of dangerous season for frenchies as sometimes it gets too hot for us...

What a big day for you, little pal. You got totally baked, huh? But so worth it.

Those little wagons sure come in handy, don't they?

Oh Brutus...I need to get Mama to bring a wagon to the park for ME!!!

Awww...that was a Most Beautiful hike and I luved that story a lot! That was awful nice of Logan to share his wagon. Brutus does looks pretty hot. Maybe he should change his coat to white for the summer.

Brutus - you are a smart dude! I would totally prefer riding in the wagon too!

Logan was very nice to share his wagon - he is a cutie too. What a beautiful way to spend a gorgeous spring day.

Brutus
You sure were one hotdog BOL...What a great hike with your pack. You better where a bright colored vest so you don't get lost in the woods.
Nitey-nite
Benny & Lily

A free ride for Brutus! Logan was sure nice to share his wagon with you!

we love trails and need to find some so we can blog about them and let all our bloggy friends see the cool stuff in LA!