I'm so excited to share with you the most interesting person Flat Brutus has met to date.  Do you recognize her?  Think Animal Planet.  Dog training.  British accent.  Getting any warmer?? 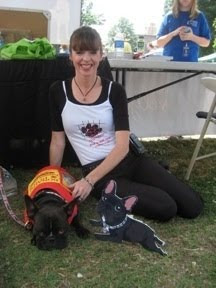 If you don't recognize her, that's Victoria Stilwell!  She's the dog behaviorist in the hit APL show "It's Me or the Dog"!! 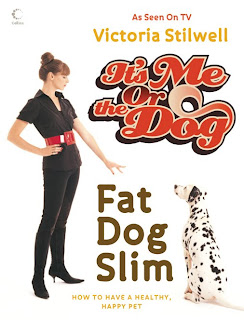 How cool is that??  He met her in North Carolina at a PMAD (Puppy Mill Awareness Day) event.  A new friend from Facebook asked to host Flat Brutus during the event, so he and Graycen (the other Frenchie in the photo) did their part to help free Frenchies bred under horrible conditions & pass legislation to curtail puppy mill activity in North Carolina.
Gosh, it's a good thing the real Brutus wasn't there, Victoria would have had to talk some sense into him I think!  Thanks to Dannee for inviting Flat Brutus & introducing him to his first celebrity!  This makes me wonder what other big things might be in store for Flat Brutus...  Meeting Caesar Milan?  Ellen Degeneres??  Bo (the First Dog)??  I guess only time will tell!
Ok, back to reality.  *Ahem*
I know some of you out there have been waiting what seems like forever for Flat Brutus to visit.  If you've checked the "Where in the World is Flat Brutus" page lately, you'll see that the host list is still growing. Whoever would have thought my "little" project would only be gaining steam 2 months after the Flat Brutus World Tour began?? 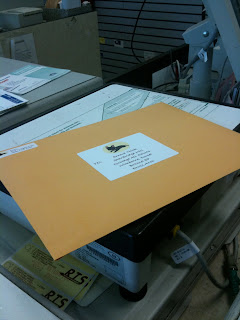 I do feel for those of you waaaaaaay down the blogging host list, so thought it was time to breed a few more Bruti (I even bought my own laminater)!  One will be taking on some of the duties of International Flat Brutus, who I fear is permanently lost in Singapore (this one is heading to England, where the postal system is hopefully a little more predictable).  As far as the other one, I proudly introduce "Western" Flat Brutus! 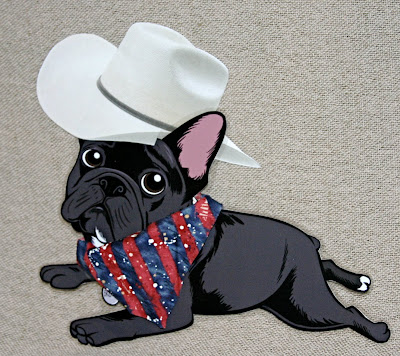 For all you west of the mighty Mississippi, this flattie is all yours!  No, he really won't be wearing a Stetson & bandana when he comes to visit - I just couldn't resist using a few props :)
I'll updating the host list to show the new Bruti in circulation, so you might want to check there in a few days to see how the new additions affect the itinerary.  This seems to be a busy time for many folk, and so it might be that you'd like your visit later as opposed to sooner.  Feel free to give me a shout in the comments if you are ready, since I still need to decide exactly where to send him first!  I know Fiona, Mayzie, Rocket Dog and Hootie, and a few others have asked recently...   So speak up y'all!! 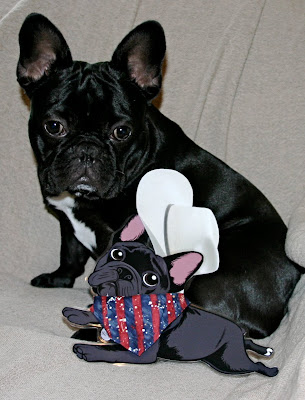 Stay away from the prickly pears this time, OK lil' buddy?  Remember what happened when you tried to play in one when mom went to Arizona!
And it's still not too late to join the Tour if you are just finding out about it.  Drop me a line at brutusthefrenchieATyahooDOTcom if you have any questions or just want to say "hi".  Flat Brutus has raised over $300 for FBRN to date, so thanks to all of you who have done matching (or more!) donations.
You probably won't hear from us again until at least Monday night - got a busy weekend in store.  A few days of dentistry, followed by a few days of agility (our 2nd AKC trial).  As I've said before, ya gotta work hard to play hard!  So I'll leave you with a different kind of Flat Brutus - this one courtesy of our new iPhone app (ToonPaint) - it turns any photo to a black & white drawing - pretty neat, eh? 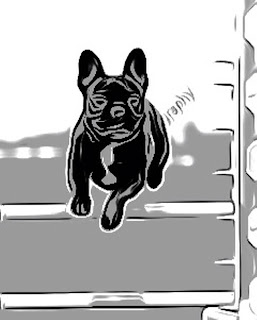 Ohmidogness! I LUVS Victoria Stillwell! I think she's Most Amazing! I'm so jealous...um...I mean, happy for FB that he got to meet her!

And yippee on the new Flat Bruti going out in the world. We're gonna be arounds all summer so he can head our way anytime he wants to.

Good luck on your agilitys this weekend. And I sure do luvs that new cartoon picture of Brutus!

We're really sad to hear about the missing Flat Brutus in Singapore. I've got my paws crossed that he'll show up at our doorstep soon!

Woof! Woof! Golden Congrats to take a photo with a celebrity. Lots of things going on ... you sure busy. Have a wonderful time. Lots of Golden Woofs, Sugar

That's so cool that he met a celebrity! Have fun this weekend!

that is so cool that flat brutus has met a celebrity. i like victoria and her methods.

i must congess that i forgot to bring flat brutus to the seattle pug party. he will get out and about soon with our group.

and i just love the photo of brutus in his hershey's kiss ensemble! too cute!
hugs,
puglette
:o)

How cool is THAT?!?! I love Victoria Stillwell. She is such a good trainer and her methods are excellent. How absolutely exciting!

Best of luck at your AKC trial - can't wait to hear how it goes!

We watch Victoria on TV! How cool for FlatBrutus!
We're still awaiting his arrival here! We're not expecting any celebrities but we can still get into heaps of trouble, right, FB?!

Since we don't get Animal Planet we have no idea who Victoria Stilwell is. But we're glad she got to meet Flat Brutus - you might have started a revolution!!

Good luck on the agilities - we're just keeping our fingers crossed that Ruairi can pass Puppy Kindergarten and get his first AKC Star.

I'm utterly amazed at the Flat Brutus project. What a cool idea!

Holy Cat Crap Brutus!! You are now rubbing noses with the BIG time stars!!
At least I will be able to say.. I knew Brutus when...

How awesome that flat Brutus met Victoria! We have two famous frenchies that sometimes live by us, we probably won't get to meet them but it's part of our plan to try for Flat Brutus' visit.

We are so excited for mom, Brutus and flatty. You are a star, we love it! We are honored to be your friend and to have hosted flat Brutus
have a happee weekend
Benny & Lily

OMD!
Flat Brutus sure is having a pawesome time meeting lots of friends around the world!
Do you think he wants to come back home someday??
Kisses and hugs
Lorenza

Flat Brutus got to meet the babe from APL?! woah, we are jealous! We can't wait until Flat Brutus gets here!!

What does it mean when a human is jealous of a cardboard dog who gets to meet Victoria Stilwell? Hmmm...I guess you could call me a bit Pathetic, that's what! Gosh, your Flat Brutus idea has made YOU a household name in Victoria's world! I wonder if she has connections with Ellen, Cesar Milan, or any others? Wouldn't that be exciting?

Wow!! Victoria Stillwell! Flat Brutus sure is getting around!!! We've enjoyed his visit furry much!!