Happy Friday!  We've been such bad bloggers, this is only our second post this week!  Brutus was resting up after his big agility debut (thanks for all the lovely comments!), and I was up to my elbows in teeth.  Things should settle down for a bit, so I promise to get caught up on everyone elses' blogs!
Speaking of catching up, it's time to check in on Flat Brutus!  The good news: so far he has raised almost $250 for French Bulldog Rescue Network!  The bad news: a few of the Flat Bruti are MIA.  One of them is stranded in Singapore (last seen with The Musketeers), another is the victim of some bad timing; he must have arrived just after The Feisty Three left for vacation.  Luckily there are a few others still successfully roaming, so I have some fun things to post about.
Flat Brutus had the honor to meet some really special Frenchies up in Willington, CT, as he was the guest of honor at the New England Frenchie Social.  There were lots of FBRN dogs attending, both current fosters and graduates.  In addition to getting his picture taken at the social, he was also the prize of a raffle, so one lucky attendee got to take him home for the week.  Not only was it great visibility, but the raffle raised more money for FBRN.  They had this really huge sign made, and sent it to me as a thank you gift.  It's a life-sized Flat Brutus!! Isn't it fun? 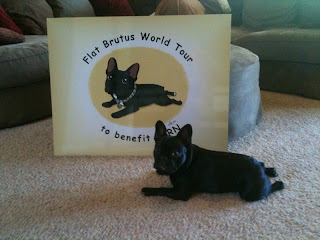 Here's Flat Brutus at the social, doing what he does best - making new friends.  Everyone wanted their picture taken with him it seems!  This is also a great example of all the shapes and sizes that Frenchies come in :) 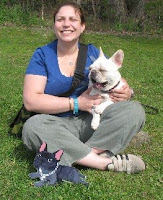 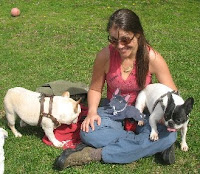 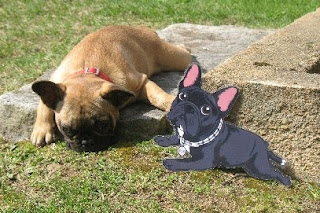 The lucky winner of the Flat Brutus raffle was Joan, an FBRN volunteer.  Flat Brutus went to work with her at an endoscopy center.  Yikes, there's a place no one likes to have an appointment - let's hope that Flat Brutus was able to bring a smile to the face to some of the patients who were in for their procedures.  As usual, FB was just happy to be out and about (plus since he has no insides to scope, no need to worry), even had his vitals checked. 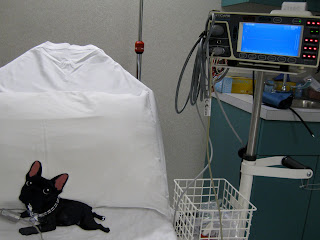 Back at Joan's house Flat Brutus was in good company.  Here he is with Pache, Dulcie & Kaspar 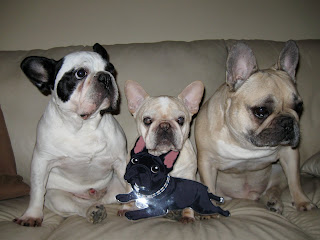 He merrily accompanied Tanner, a new foster who needed treatment for cherry eye, to the vet for his procedure. 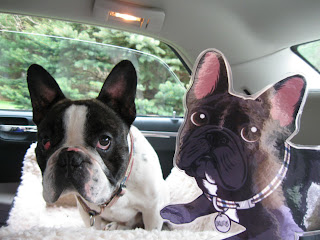 Here he is getting a lift from Kaspar, a Frenchie who has lost the use of his back legs.  This has to be my favorite photo of Flat Brutus to date! 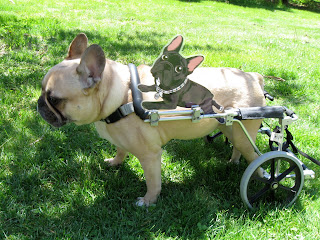 Not all the animals at Joan's house are Frenchies.  It seems that Flat Brutus found himself in Fowl territory! 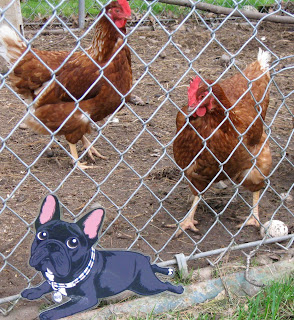 Finally, as a special treat, Joan took Flat Brutus along to Foxwoods Casino for a little relaxation. 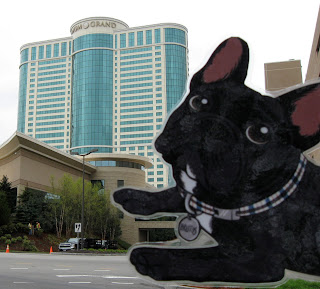 I got a kick out of this, since the real Brutus had been there last fall, during our New England Earlventure: 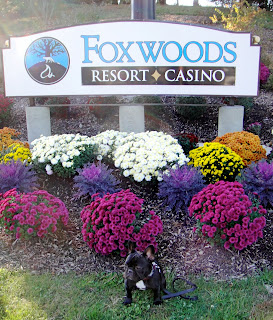 More news on Flat Brutus to come.  I did receive news that TN Bull Terrors had a nice visit with him, so we look forward to their post.  It must be off-season for blogging right now, since it seems that many blogs are on hiatus right now.  Certainly understandable, since we ourselves haven't been the best bloggers lately!  But if anyone has any information on the missing Bruti or the hosts where they were last seen, please drop me a line.  Hopefully all is well and they will resurface soon.   Otherwise you might see Flat Brutus on the side of a milk carton! 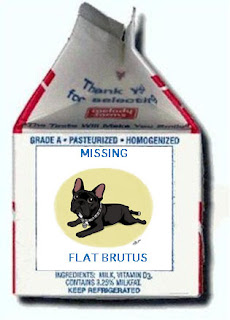 WOW, looks like Flat Brutus is having some grand adventures!! We liked the picture of him with Kasper too!!! Such a sweet group of smooshie faces!!! Hope the MIA Brutus' turn up soon!!!

Oh no! Missing Flat Bruti! Well, knowing the FB's, I'm sure they're off on some unauthorized mischief of their own. Do they have microchips?

It looks like this FB had a most wonderful time, though. But tells him to watch out for chickens. They don't look near as furendly as ducks!

We loved the update on Flat Brutus. However, it seems like 'our' flat Brutus is one of the MIA ones, and since we are so far down the list, we may Never See Him!!!! This disturbs us all greatly; maybe he could cone himself. Again. Still, it looks like this one is having a great time (and donating him time to worthy causes - very cool!)!

flat brutus will be with mobbed by pugs tomorrow at the seattle pug gala! we hope to meet with several other bloggers and pug village forum folks. and i have to say, i just love the first photo on your last post. brutus looks so happy and focused.
hugs,
puglette
:o)

Hi
Flat Brutus is really making the rounds. Looks like he is having a blast!! Cant wait till he can visit me. Miss you on the blogs!!

oh goodness your favorite photo wiff the doggie in his wheellegs ish just preciousness
flat brutus ish just having the time of his life AND all for a good cause too. CANT GET BETTER THAN THAT!!!

That picture with Kaspar makes it look like FB is taking a ride! I hope the missing Bruti are found soon!

So many great adventures!

Oh Brutus,
Flatty is raising money for such a good cause. Holy crap, I thought that was me in one of those pictures. Love it. Maybe Flatty will be bilingual when he gets back from Singapore
Benny & Lily

Flat Brutus looks like he is having a blast! Hope the missing Bruti show up soon :)

YIKES Im really worried about FB MIA in Singapore, I hope he doesnt litter or spit out his gum, he'll cop a canning! If he turns up here I'll be sure to wrestle him to the ground and then snuggle up to him....ill let you know ok :) Major

I hate when things get lost in the mail. Honestly, knowing the Postal Service, it'll probably turn up in a couple of months, when you least expect it!

We've been really busy, too. We're actually catching up on blogs right now, in between runs of our trial. We DID go home.

Our Uncle Phil lives in Willington, CT! We are wondering if maybe he saw flat brutus while he was here?!

Well, it has been a long time since I've visited Brutus myself and I am embarrassed that I'm finally catching up with you! Anyway, I am very happy that Flat Brutus is having more fun than I will ever have in a lifetime (I'm so jealous) and it's good that he's doing so much socializing! He needs to write a book about his adventures, don't you think? Oh...that would be another idea for Brutus, wouldn't it? It could be called "Flat Brutus and His Amazing Book Tour"....I can see it in his future! heehee!
I am curious when Flat Brutus is going to visit us in Manchester, NH! I am going to check his whereabouts asap!
-April the pet sitter and Daisy the Coonhound-

Love the Flat Brutus updates! (And glad he didn't have to get "the procedure.")

Michelle,
Thank you so much for all you are doing for FBRN! We posted a story about Flat Brutus this morning and directed people to this post for more information.
We are so grateful for your ingenuity and generosity! It is so much fun to see how far and wee Flat Brutus is traveling.
Many thanks again,
The Frog Princess