We made it!  After nearly 20 straight hours on the road, we're home! 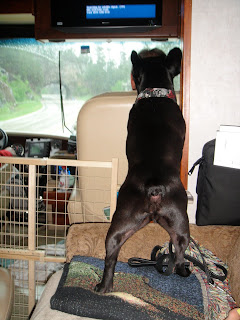 Hey, this is finally starting to look familiar!
Our Wild West Earlventure is officially over.  Here is Captain Paul completing the final hurdle, backing Big Earl into our driveway. 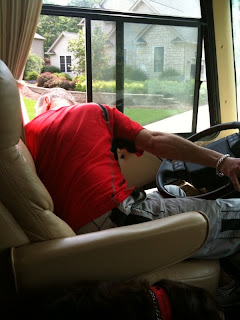 Over the past (almost) three weeks, he safely piloted us through three time zones and 12 states, complete with some really impressive maneuvering in tight spaces!  In case anyone wants the official trip statistics, here they are straight from the on-board computer: 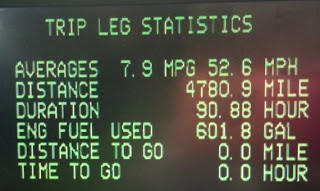 Yup, a whopping 7.9 miles per gallon.  At 32,000 lbs. Big Earl is not exactly a green vehicle...  But that's the price we have to pay for having all the comforts of home wherever we go.  Can't believe we logged over 90 hours and almost 5,000 miles!
Other than lots of wet, cold weather, the trip lived up to our expectations.  We saw all sorts of wildlife, from bison & elk to bald eagles & pelicans.  Never saw a moose (to Paul's great disappointment), but I was able to corral and tame the elusive jackalope!  Who knew they were so big! 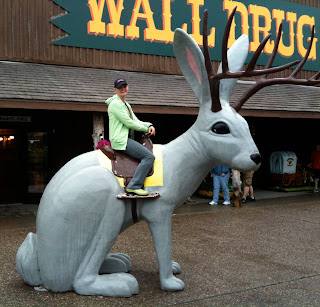 We never really did "see" a bear - save this one that was just a speck on the horizon, even through binoculars.  You'll have to take my word for it, but this really is a grizzly according to the ranger who pointed him out.  See that little black dot right in the middle of the photo? That's our bear! 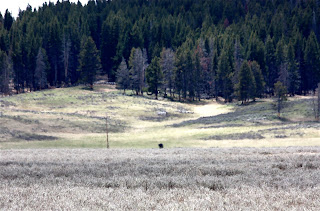 Admittedly, we were hoping for a little closer bear encounter than that.  However when Brutus showed up with his guy, I was glad it wasn't the real thing (although it is supposedly life-sized). 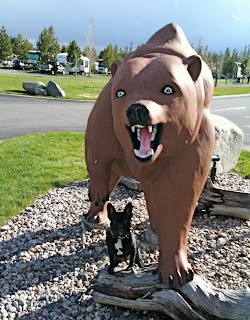 Hey, mom - look what followed me home!  Can we keep him?
Sorry Brutus, he'd eat us out of house & home.  Literally.  Why else would we have found this sign: 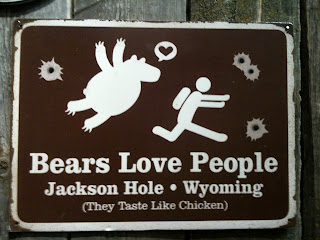 So no moose or bears, but otherwise the trip was a complete success!  Speaking of which, there's one more important thing I keep forgetting to mention:  Mason accomplished another milestone in his personal quest! 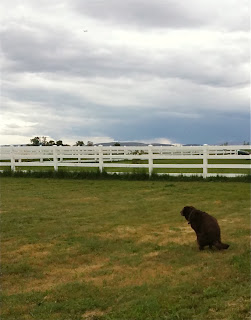 Can a guy get a little privacy out here??
Yes, Mason pooped in every state we went through!  That brings his grand total (including the New England States from last fall) to 21 states!  Quite the prolific producer our old boy is.  Seriously, how many dogs can claim that kind of statistic???? 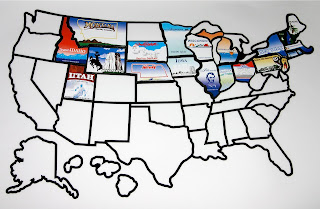 All in all, I took well over 1000 photos, so what I've shown here on the blog is only a little taste of the fabulous things we saw & did (I'll save the bulk of them for torturing my family by making them sit through slide shows LOL).  I could go on & on, but you've all been patient enough, think I'll leave it at that! 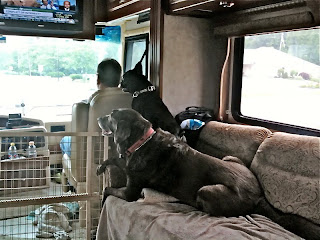 I see it Mason!  I see our house!
It feels so good to be home safely.  Now it's time to clean out Big Earl so that he can rest for a few weeks.  Since several of you asked, there's not much planned for B.E. in the near future, just some weekend trips here and there.  The coach will be home away from home from me & Brutus at an "away" dog show in August, then maybe a trip south in the early fall.  Finally there's Ohio State games to tailgate before Big Earl goes into hibernation for the winter. Maybe some day we'll get to use him when it's NOT raining - that'll be a new experience!  But you know what they say, without rain, there'd be no rainbows! 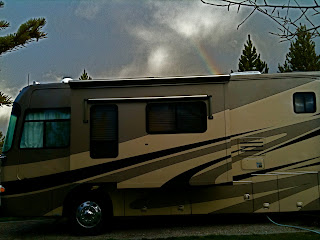 Well, time for me to get to work.  Thank goodness it's easier to unpack than it is to pack.  Then maybe I can get a little rest in preparation for tomorrow's post.  Are you ready?  Wait for it........  The torture will finally be ending.... 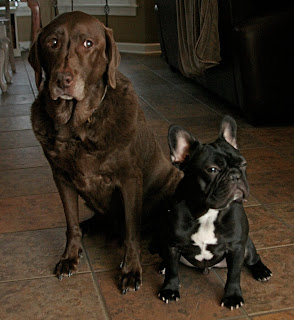 I can't believe mom has drug it out this long!  What the heck is she up to?  We're really suspicious....
Yes, our much-heralded BIG ANNOUNCEMENT will be posted tomorrow.  After all the build-up I know no one will believe it until they see it.  I promise, you'll know tomorrow, and it'll have been worth waiting for :)  See ya then!
Posted by BRUTUS at 9:56 AM

All that stuff is grrreat, BUTT I've gotta say MASON you are my HERO. Pooping in 21 different states???? Holey Cow... that has got to be a Record!!! I've only pooped in 5 states.
Can't wait until I see your post tomorrow. I am glad that you made it home safe and sound!!!

Glad you made it home all safe and sound. I am sure Big Earl is ready furs a well deserved rest!

That is one pawsome statistic that Mason has there! Is he going tp try for a 50 state pooper record? (I guesses it might be hard to includes Hawaii in his portfolio, unless Big Earl cans swim. BOL!)

Wow! We are totally impressed with Mason's pooping itinerary. I've only pooped in 9 states... Mom comments the Enterprise's gas mileage, too (she says we average about 6.5 mpg, but we're pretty much always towing something), however, as she says, it's not like you are driving Big Earl to the office every day! (And 20 non-stop hours? Are you people crazy? Oh. Wait. Your parents took time out of their schedule to meet us - they must be crazy! Heehee!) Happy homecomings! :-)

-Fiona and Abby the Mutant Puppy

welcome home, ya'll!! i'm glad you made it home all safe like. :)
please will you tell mason that he is totally, totally awesome!! i've only pooped in 2 states evarrr, but i'm gonna try my hardest to be just like him!
*woof*
the booker man

pee s -- can't wait for tomorrow to find out what the surprise is!!

Gosh, what a Most Grand adventure! I felts like I was along on the trip with you. I suuuure wish mom and dad would get us one of those Big Earls.

Oh, and did you know mom and dad have been to that Wall Drug place before, too? But that was like 100 years ago and before that Jackalope was born, I guess, cuz they didn't see him there. Good job taming him. Did you bring him home with you?

what an awesome trip! i am sure you were so happy to sleep in your own bed. :o)
and what iinteresting statistics. charlie and ollie have only pooped in five states, mason you are the record holder!
hugs,
puglette
:o)

Woof! Woof! Good to hear that you made it HOME. That was a FUN road trip. Mmmmmm I think I have a guess of what's your big announcement ... How exciting! Can't wait to hear more. Lots of Golden Woofs, Sugar

Mason, we salute you on such a grand accomoplishment! You are THE DOG! We're glad you all made it home safely, too!

Wow Mason, we are so impressed at your poop adventure!!

We are glad you are home safe and sound!!

We are pretty impressed by Mason's accomplishment!

We can't wait until tomorrow to hear the big announcement!!!

Glad you had a great trip and got home safely :)

the ohio state games are the most important part :)

Wow Mason that is quite an accomplishment. I have peed in 7 states and hopefully will be adding to my total....Lets see who can get to 50 first! Can't wait to hear what the surprise is...although we have a pretty good idea. BOL BOL BOL

I'm happy you are home safe. That is alot of miles to travel in three weeks. I bet you all are wore out! Mason really pooped in every state? Wow!

We love the look on your faces in that one picture and can't wait to find out what the BIG ANNOUNCEMENT is.

That picture of the bear (the black spot in the middle) looks suspiciously like my bear picture from Yellowstone! Well, maybe I was a little closer. We saw our only bear near one of the parking areas. One person announced there was a bear and everyone with cameras went running after the poor thing! (Yeah, we're not the brightest of species sometimes) The closest I came to a big adventure like this was an 18 day, 12 state (plus D.C.) trip to Florida and back a couple years ago. I totally enjoyed your adventure went! Thanks so much for sharing your pictures, your laughs, your crazy moments. :)

Sure glad you all made it home safe and sound.

Captain is very impressed with Mason's new claim to fame!!!

PS: caps no longer needs his doggie diaper... THANK GOODNESS!!! The baby officially knows that this is his house...

We too, share your suspicions Mason and Brut. There have been rumors about the big suprise you know..
Anyhoo, Mom is totally jealous of your Jackolope riding. She loves wierd stuff like that. That grizzly had googly eyes like me!
Sighs,
Kitty

it was a really really fun adventure to read :)
more more more trips with big earl

Welcome home Brutus and Poop Meister. You guys sure did travel a billion miles. All those beautiful places. Those middle states are sure home to big nutty animals. Anyway welcome back. Patiently waiting for the next post.
Benny & Lily

Mason, you are prolific, fur shore! Welcome home and thanks for the great tours of the places and wildlife you saw - beautiful! Looking forward to tomorrow's announcement!
Hugs xoxoxo
Sammie

Welcome home Brutus. It must be nice to smell those old familiar smellsof home. Speaking of smells, that quite an accomplishments Mason. You must be very proud of yourself.

That's one helluva trip ya took! An' I LIKE Big Earl!

I am so glad you are home at last! Now you can sleep in your own bed and maybe ease up on the guard duty a bit. Rest up. I can't wait for tomorrow!

Glad your home safe and sound!
I'll be back to see what's going on tomorrow!
xxoo
Deborah

Sure you had a pawesome trip and now you are at home sweet home!
Good job Mason!
I will be back to know about your big announcement!
Kisses and hugs
Lorenza

I'm lucky I'm so far behind on reading because the big announcement is probably already waiting for me to read it! ;-)

Well first of all pooping in 21 states is an awesome task. Mason should be commended.

It looks like an amazing trip, even with the rain.

We're off to check the last new post to see what the surprise is!