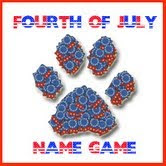 Our pal Frankie Furter came up with this fun idea to celebrate our country's birthday.  What a great idea!  It especially appropriate since we've just added a new member to our family, and it's the perfect chance to learn a little more about her.   So to start, here's the whole pack - the best "group" picture I've managed so far. 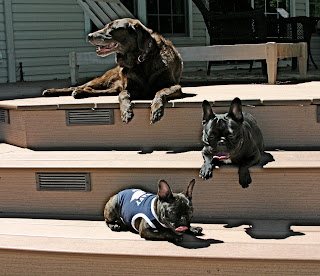 It seems right to go in order of seniority.  So from tribal elder to newbie, so first we have Mason. 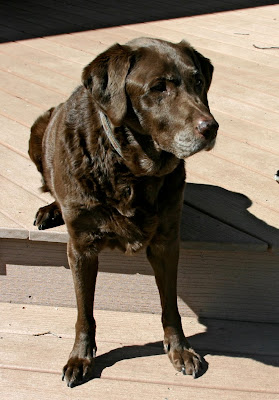 Our big goofy, lovable, with-you-till-the-end, loyal labradork.  Mason was a member of Paul's family before I was, and to this day remains very much daddy's boy.  Still a bachelor, Paul had decided to get a puppy to make his condo seem a little less empty (he'd always had a dog growing up).  He found an ad in the paper for lab puppies, and when he went to check them out a little chocolate pup was all that was left from the litter.  He looked at Paul and said something like "Hi there.  I'm your dog.  When are we going home?" with his big brown eyes.  It was a done deal from the word go.   Since getting a dog was a kind of impulse purchase (Paul is famous for this sort of thing), he hadn't come up with a name yet.  Later that day, when Paul took the pup to meet his family, Scott (his younger brother) said "I've always wanted to name a dog Mason.  That's what his name should be."  And it stuck.  Nothing fancy or symbolic behind the name - it just fit.  Funny, that is sort of how Mason is in general - simple, no-frills, here-I-am-ya-gotta-love-me kind of dog.  He might be slowing down a little more each month, but according to Paul will always be "the best dog ever".  He's currently putting up with the 3rd addition to his pack (the first being our old terrier Duncan), and is the connsumate good sport.  Love ya, big furry buddy!

OK, moving on.  Brutus.  The little fireball that fuels this blog running with his energy & antics,  keeping you all coming back for more. 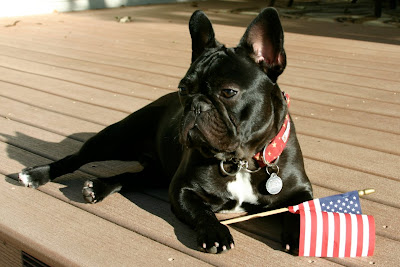 Unlike many things about Brutus, his name is pretty simple.  Paul and I were trying to come up with a name on the 3 hour drive home from his breeder.   It was late October, and the college football season was really heating up.  As you may know we are huge Ohio State fans, and their mascot's name is Brutus (the Buckeye).

That was the very first name that popped into my head, and it turned out to be the one that stuck (the other favorite was "Divot" since we live on a golf course).   When people meet my stocky little guy and ask his name, upon hearing "Brutus" they inevitably reply "well of course it is" or "he looks like a Brutus".  I think so too, can't imagine calling him anything else!   In fact even his registered name (with AKC) is just "Brutus".  He does have a good repertoire of nick-names: Brute, Bru, Mr. B, Brutie-patootie and the newest (since the addition of Carmen) Brutusnohumping.
Hey, for a high-maintenance guy, at least one thing about him is easy - his name!  Here is an all-time favorite photo to help commemorate the holiday, Brutus striking his much-acclaimed "Washington crossing the Delaware" pose. 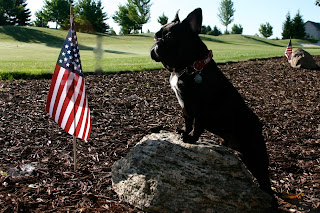 Last, but certainly not least, is our new little girl, Carmen. 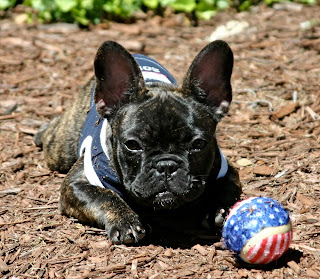 This is only her second appearance on the blog, and this game is the perfect opportunity to tell you a little more about Carmen.  Her name was picked out long before she was!  Although I didn't mention it in the first post, a few of you (who had some in with Ohio) correctly guessed where her name came from - it's another Ohio State connection!  The school's alma mater is called "Carmen Ohio" (click here for a link to the song being played by the OSU marching band during their trademark "Script Ohio" formation), sung by the entire team and fans after each victory.  According to wikipedia, Camen means "song" in Latin, so literally the title just means "song of Ohio".  I have to also give due credit to my friend Courtney for suggesting it (a much more fitting name than our best alternative, Scarlet), as seems to be the perfect name for our little princess! Unlike her big brother (who BTW is not related, other than a 4th degree relative from the same line), Carmen has a traditional registered name with the AKC: Drama Queen d'Assisi.  Her litter (which came to be known as "the Royal 6-Pack") had a theme of kings/queens based on their dad's name, King of Queens d'Assisi (click to see more about daddy Doug).  All the girls have "queen" in their names, and the boys "king".  I wanted something that had a connection to her call name, and after much debate settled on Drama Queen.  My rationale is the French opera "Carmen" (1875, George Bizet), in which the title character is a fearless diva who captures the hearts of many men (unfortunately to her own demise).   So the "drama" really refers to the artistic type, not the emotional type LOL!  The rest of her name (d'Assisi) is the traditional way to recognize the kennel that bred her - French Bulldogs d'Assisi (click to see more of Carmen's illustrious family). 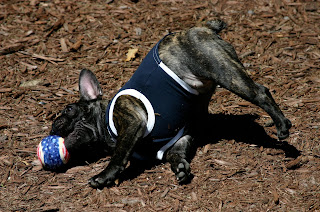 My friend (and Carmen's breeder) Lori warned me that dogs tend to grow into their names, so only time will tell what kind of Drama Queen I'll have on my hands!  For now she is my little princess (hence the crown on her collar which you'll see if you look closely in some photos in our intro post), and quite the little lady at that.  Sharp as a tack (she already knows sit, down, and touch, as well a few other training commands we'll build on later), spunky, and quite the little comedienne as well.  I'm hoping she'll grow into a fearless kind of girl just like her namesake, since that's what it will take to keep Brutus in line!

Hope you enjoyed our Name Game post!  Thanks to Frankie to coming up with the idea - perfect timing for us!  Now I'm off to read everyone else's posts and find out more cool things about how all our furiends got their names.  Have a Happy (and safe!) 4th of July everyone!!!
Posted by BRUTUS at 11:20 AM

We loved learning more about your names! We'd love to know where Brutus's collar came from. We looked all over for a patriotic collar for Morgan this week and couldn't find anything!

awesome sauce post! i liked learning about where ya'll's names came from! i have to admit, though, i like mason's name the bestest cuz my mama and daddy are carolina gamecocks, so they are kinda sorta not OSU fans. teehee. it's okie dokie -- we can still be grrreat friendz! ;)
happy independence day!!
*woof*
the booker man

The names sound perfect with being Ohio football fans. welcome to blogland Carmen, it is very nice to meet you and we look forward to hering about your experiences, us drama girls are something else!!

have a happy 4 th
wags
Jazzi

Lola and also Franklin, too said...

Mason is a great name for a labradude and the others have such a lot of meaning to them. It's all furry interesting. Love Brutus' patriotic pose, too. He looks so serious.

Great to hear Mason's story! And Brutus - dude! Most Excellent pose there! As for your Drama Queen sister? Well, you're going to have your hands full for a quite a while with that one! BTW, we love hearing how our friends got their names - there are a bunch of very creative parents out there!

Those are some furry nice tales!

We love your post and learning all about you guys. You sure are a good looking bunch. Hope you have a very happee 4th. Mom said we can't play Frankies game. Cause Lily is Lily since she liked that name and I'm adopted show dog Benson. Nutty
Benny &
Lily

That was a Most Wonderful post about three Most Wonderful names (and doggies)! My mom's a big college football fan but she had NO idea that the Buckeye mascot is named Brutus! We just luved getting to know everybuddy better, but especially your new little Drama Queen!

We loved learning about your names, and are particularly fond on Carmen's full name. She looks so cute in her tank top too :)

woo hoo I knew it was Carmen Ohio :)

I loved reading about your names!
Happy Independence Day!
Kisses and hugs
Lorenza

We loved your post. You have a great way with words all the time. It was so interesting to learn how Mason came to be Mason, the no frills guy - he is a sweetheart. And Brutus - you are right, he IS Brutus. Love that signature photo too. And sweet Carmen - if she becomes a drama queen, it will be a very sweet one:)

I can't imagine Brutus being anything but Brutus either! And Carmen, well, I will just have to get to know her better. Does she have any nicknames besides Princess? Thanks for sharing your names. It is fun to learn about everyones!
Snuggles,
Twix

It's so interesting to hear how names are chosen. I think you scored winners all the way around!

Thanks for telling such great stories behind yous' names! Each is perfect for your special selves! Hope you had a wonderful 4th!
Hugs xoxoxox
Sammie

I loved learning more about your pups names and I loved the introduction to your newest furry child too! I think all of the names fit them all just right! Hope you had a great holiday weekend!

Woof! Woof! We are enjoying everyone's NAME GAME post. Thanks for sharing how you go your interesting n great names. Lots of Golden Woofs, Sugar

That's why I love this name game so much, buckeye! I got to learn about your names and a bit more about your adoptions, especially Carmen's. I love her name from the start and now I appreciate it.
Twinkie