You might remember that last weekend Brutus and I were at a trial again.  After a 6-month hiatus from the obedience ring to rework our training, we returned to compete in the second level of Rally, Advanced.  This marks the first time we've worked off-leash in the obedience ring (our Rally Novice title was all done on-leash), and I had no idea what might happen.  Sure, we can do all the exercises perfectly in training, but I really didn't know what the added stress of the show atmosphere might do to my little goblin. 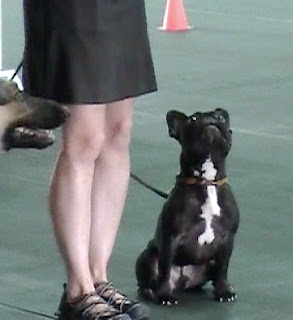 We showed both Saturday and Sunday, and I'm pleased to say that Brutus totally ROCKED!  Not only did he deal with the distractions around the ring well, he did everything I asked!  Maybe Brutus has figured out that when he's in the ring, all eyes are on him - he was just beaming the whole time.  We put in great exercises both days - the Saturday run earned us a perfect score (100 - the only one given out all weekend!), and our Sunday attempt wasn't too bad either - earning a 99 with that performance.  The latter is shown in the video below, the only thing that kept us from repeating our perfect score from Saturday was Brute's personal hygiene moment (darn itchy collar!!!) early in the test.
For those of you without the bandwidth to watch the video, here are a few still shots excerpted from that footage.  A little grainy, but at least it gives you a little idea of what Rally looks like.  The dog and handler must work their way through a 12-18 station course, performing the behavior indicated at each sign (which you see propped up on the floor).  The stations vary from something as simple as a sit or down to more complicated things like finishes, patterns around cones (spiral, serpentine, or figure-8), moving backwards or sideways with the dog staying in heel postition, and even jumps.  You cannot touch the dog in any way during the test, but (unlike traditional obeidience) the handler can give multiple signals (both verbal and hand cues) and encourage the dog in any way they'd like.  No treats allowed near the ring, but you are allowed to lure them with an "air cookie" without any kind of deduction.  I'll reluctantly admit that I think Brutus really believed that I had a hot dog in my hand during our test.  I feel a little bad for fooling him like that, but hey - you do what you have to do, right? 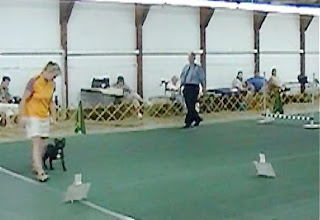 The guy walking around in the background with the clip board is the judge - he follows around to watch closely for any mistakes for which he can make deductions.  A perfect score is 100, and any little thing from a crooked sit or extra step can cause us to loose points. 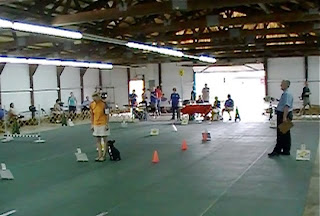 I was so proud of Brutus I could almost cry.  Not only did we get a nice round of applause after both our runs, but also many great compliments from co-competitors, on-lookers, and even the judge.  We won the class both days, and during the awards ceremony the judge remarked how pleased he was to see an "off-breed" (bulldogs aren't exactly your typical obedience trainee) do such lovely work!
Here's Brutus resting on his laurels - literally.  Were awarded the blanket with our Sunday win, and the toys for our qualifying scores both days.  Also pictured are our blue 1st place ribbons and green Qualifying ribbons. 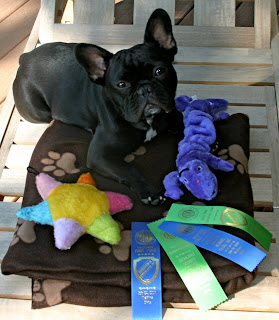 This makes our record 6/6 in rally in the "Q" department (including one extra Novice leg) - one more run and we'll have our Rally Advanced (RA) title & move up to Excellent.  We hope to keep our perfect record in tact next week when we compete outside on grass for the first time.  For that show the Frenchies and I will be traveling to extreme NE Ohio (Canfield) for one of the biggest shows in this part of the country (the "Steel Valley Cluster").  Since it's about and hour and a half from home and I am showing 3 days, Big Earl will come in really handy and serve as home away from home, right on the show grounds!
Agility might be more exciting to do, but seeing Brutus shine in the closer scrutiny of the obedience ring really makes me proud!  Hope to have more good Rally news for you in a few weeks!
Posted by BRUTUS at 3:04 PM

BTW, had a little trouble reading your blog. Maybe it's just my old eyes, but blue text on gray background wasn't working well for me!

we've been seeing alot of your flat self around so decided we must come and say woofs to the real thing... woah you are pretty smart there brutus we will definitely visit again loves and licks doyle and mollie

This is grrrreat.
Soooooo when are we gonna start hearing about your Wedding????

Yay for you Brutus!

Congrats again, Brutus!!! You did an awesome job.

Those are some very pretty ribbons, Brutus! Congratulations!

CoNgRaTuLaTiOns to you both! All your hard work paid off. Great prizes!

Congrats Brutus!! The video was so cool. Had to chuckle when you stopped to take a little itch break.BOL! You are amazing!!!

Now we are hanging our heads in shame!

WOW, that was great! Our offleash Rally debut is coming on August 14, and if we get even CLOSE to this performance, I'll be super happy!

Congrats! You sure are racking up those titles! Maybe you'll be the next Soren..

Way to go, Brutus! We wish you much good luck at the next big show!

Brutus we are so proud of you...post to facebook...just for you
Benny & Lily

You are SO our hero; Mom only lets us off leash when we are at the pond. I don't think she trusts us yet... You are AWESOME!!!!

Congrats Brutus! I also had trouble reading that shade of blue on the background :(

Yippee, Brutus (and BrutusMom)! We finished our first Rally class a few weeks ago and it was really fun! Between you and me, though, mom really needs to work on understanding what all the signs mean. She gets confused on stuffs like the difference between serpentine, figure 8 and spiral. Sigh. But I'm being patient and I'm sure she'll get it eventually. Maybe.

Anyways, I'm really proud of you both! You're my inspiration!

Woo Hoo, Brutus & Michelle! Can't wait to meet you both in September at the Frenchie Nationals!