Hang on Sloopy, Sloopy hang on!

O - H - I - O!
It's that time of year - college football season starts tonight! Those of you who have followed us for a while know what huge Ohio State football fans we are.  I mean, we named the dogs after them for Pete's sake, it's probably no surprise to anyone at this point! 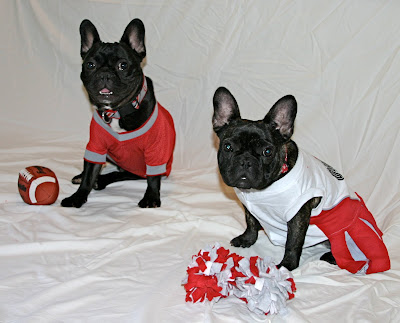 So earlier today everyone got their Ohio State collars on, Brutus strutted around in his OSU jersey, and Carmen got into the school spirit as well.  I'd be watching the game instead of typing right now, except that it's only being aired on the "Big Ten" network, which is only available on dish (and we have cable, grrrrrr).
Tonight they take on Marshall "Thundering Herd" - never heard of them before, a school in Huntington, WV apparently.  As I type the Buckeyes are kicking the snot out of them in the 3rd quarter, 42-7.  Hehehe.
We plan to return to our tradition of "College Football Friday" posts now that Tressel's boys are back in action.  Don't know if we'll make it to a game this year (tickets are next to impossible to get), but we'll be here rooting for the Buckeyes any way we can!! 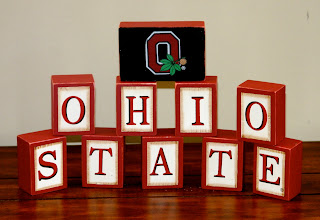 hehehe you furgot to mention that your motor home is named BIG EARL !!!
OMD OMD... Carman looks soooo stinkin CUTE in the cheerleader outfit.
We have DTV and couldn't find the game, butt my mom's furend called and he said that he was watching the game and he has DTV also.
Glad that you are happy about F=ball season starting up again.

D'oh, d'oh, d'oh!!!! You guys are PAINFULLY cute!!! Carmen has got to be the best looking cheerleader we've EVER seen!!! And no, that jersey doesn't make your butt look big. (Especially compared to Abby's butt.... Trust me, you haven't seen a big butt until you've seen hers!) Heehee. 'Nose tackle'. Heehee. AWESOME pictures!!!!

You are more than ready to root for them!
Kisses and hugs
Lorenza

I was very excited to head to my alum bar and watch a game :) Im still trying to find cheerleader dresses in Baily and Mesa size

Don't forget, we moved to http://dogisgodinreverse.com

Brutus and Carmen
Great Ohio outfits. Love your cheer dress, so cute. Have fun cheering for your team!! Hope they win!!

Hey isn't Marshall the team from the movie "We are Marshall"?

carmen you look cute in that outfit

Sorry you couldn't watch your game, but man are you guys stylin in your outfits! Bet Carmen could do some damage to those whiny boys! One advantage to being bowling ball shaped. Sunflowers Rule.

Sorry Brut. We're all jazzed up.

Reuben here. Whoa! Yal look awesome! Great pictures! My mom always shows me you guys' pictures cause yal look like my sister and always doing really cool stuff. Hey, I wanted to let yal know that yal won the Doggie Bloggie Award from me! Yeah, ME! Check out my blog to see the official pass and my first ever blog post. From what I understand, I had to say 10 things people didn't know about me.

Go Team! You look FABULOUS in your fan finery!

Hi Brutus and Carmen, I have only 2 words for you ON WISCONSIN!!!!

Have a great day and they made a movie about the team from Marshall
"We are Marshall!!"

Brutus you look handsome, but little Carmen is the cutest cheerleader I ever did see!

OMG, you are just the cutest cheerleader ever, Carmen!

You two are pawesome mascots for OH-HI-O! We are not as crazy about football but our mom likes to watch the Huskers play, when they are not losing! BOL

She says next year NU will be joining the Big Ten, or whatever they rename it. Then our teams will be playing against each other. I hope we can still be furiends.

Bwahahahaha! You guys are so cute in your OhioState uniforms!!

That pleated skirt is too much. Are you sure she is only six months old. Oh, Brutus, were you in some of those pictures too? I didn't notice.

Ooooh So cute! I'm doing a drawing of a friend's french bulldog and chihuahua in osu jerseys and found this and they just TOO CUTE and FUN!